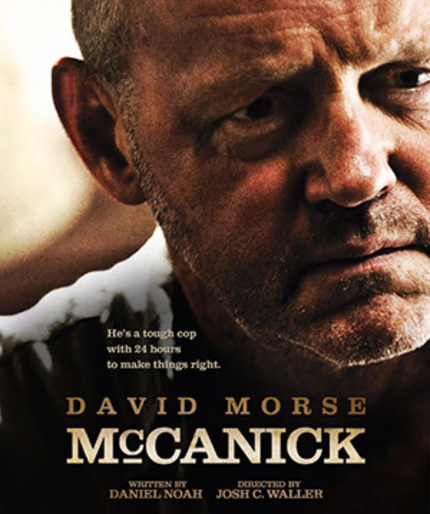 Once upon a time, our screens were littered with one-name cops - Serpico, Canon, Columbo, Kojak, all with hard C-sounding consonant names that bespoke of a grittiness or hard hardheadedness. It's no surprise that McCanick borrows both the power of the single named title and many of the same consonants, as it plays as a kind of a throwback, the weary cop trying to make a go within a system that he's bristling against.

McCanick is far more than a police procedural, however, it's a taut if at times overwrought day-in-the-life tale of an officer coming apart at the seems. It also may serve for some as a reminder of just how excellent David Morse continues to be.

Morse is one of those faces that has quietly shown up in a shocking number of my favourite works of all time. First coming to attention on the influential show St. Elsewhere, his hounddog look and raspy voice has been the mainstay in decades of films. The fact that this one performer has worked for Lars Von Trier (Dancer In The Dark), David Simon (Treme), Terry Gilliam (12 Monkeys) should solidify his role in the public conscience, yet for the most part he's still considered by many, if at all, as a character actor.

McCanick rests on Morse's shoulders, and he does an admirable job at keeping the film aloft. Structurally the film dances between two timelines seven years apart, and while the trick of having a hirsute-vs-beardless Morse takes a moment to come to grips with, it in the end proves effective, with one timeline from the rich script playing against events in the other.

On the extra-textual front, this is also the last performance by Cory Monteith, who recently OD'd in a much publicized event in Vancouver. It must be said that his performance here is a far cry from his Glee fame, and there's a real power and presence in his role on screen. While easy to spoil some of the major twists in the film, it's a credit to Monteith's legacy that he's left such a compelling turn on screen, strongly reminiscent of similar roles played by another young actor that succumbed to his demons, the late River Phoenix.

Another brilliant actor, Ciarán Hinds, chews the scenery beautifully as the cop in charge, and Mike Vogel does a decent enough job as the earnest partner. Josh Waller's direction isn't very showy, but it does well to keep things coherent as the timelines intersect. Essentially, however, this is a point a camera at Morse and watch him work, and the film is all the more effective for it.

A tight little police story with a compelling if slightly overwrought twist, McCanick is well executed fun, and an appropriate showcase for Morse's great talents.

I had to hunt hard to find someone who agrees with me about this film. It wasn't handed to us on a platter, It was a very good movie. thanks for the good reveiw in an ocean of careless ones.