TIFF 2013 Review: CANOPY Is An Interesting But Flawed Experience 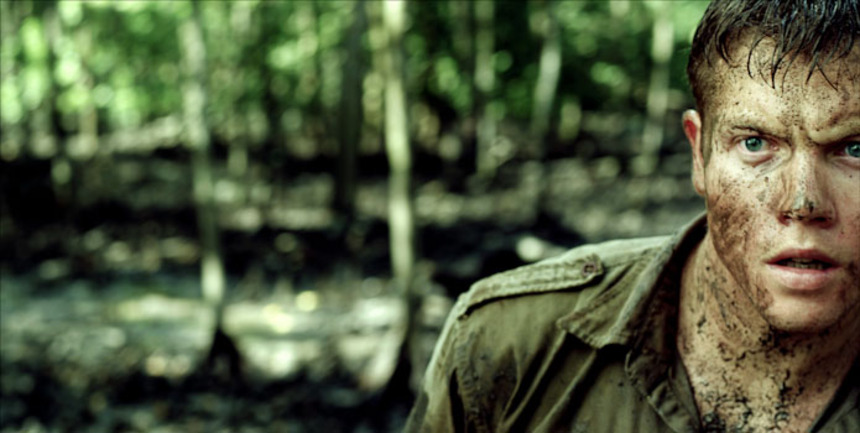 It was back in the early 2000's, shortly after the release of O Brother, Where Art Thou, that word began to circulate that the Coen Brothers intended to shoot a film adaptation of James Dickey's novel To The White Sea. It caught the eye not just for the fact that Brad Pitt was slated to star but also due to the story playing out almost entirely without dialogue, with Pitt playing a WWII pilot struggling to get back to safety after his plane crashes behind enemy lines. They hefty eighty million dollar proposed budget killed To The White Sea dead but now - a decade later and with a far, far smaller budget - first time Australian filmmaker Aaron Wilson has essentially made that movie with Canopy.

Khan Chittenden takes the lead role here, an Australian pilot shot down while battling the Japanese over Singapore. He begins his journey with a jolt, snapping awake as he dangles suspended by his parachute from a tree high in the jungle canopy. He cuts himself free and with only minimal resources must make his way undetected through enemy territory and back to safety.

Canopy plays out almost entirely without dialogue, the audience plunged into the experience not via plot or exposition but through the impressive and omnipresent sound design. Guns pop in the distance, mud sucks at shoes, insects whine and occasionally there is the sound of nearby forces. And our primary companion remains nearly silent throughout for the twin reasons that he must remain undetected and that when he does encounter another friendly face it turns out to be a Chinese resistance fighter and the men have no way of bridging the language barrier.

The film is clearly meant to play as an immersive sensory experience and for stretches it does but the immersion never fully takes for a trio of reasons.

First, the film misses some simple opportunities to engage its audience in a meaningful way. Where are we, exactly, for one thing? Where do we have to go, and what obstacles will need to be overcome to get there? Our downed pilot clearly has the answers to all of these questions as he repeatedly checks his map and compass but the audience is never let in on any of them. And by denying us this basic information we have no means to gauge progress, to hope for success or fear for defeat. There's no ebb and flow to the drama, no build and release, because we're denied basic information. And when that is combined with a peculiar willingness to deny other obvious facts - there are clearly friendly forces in the area (see the fact that our Australian literally runs into one of them by accident in the middle of the jungle) so why do we never seek them out for help? - it creates a distancing effect. We're not able to sink into the experience because we're denied basic information that the lead character has and because he sometimes behaves in ways that make no sense without any explanation offered.

Second, some of the devices used by Wilson to create immersion actually prove to be counterproductive in themselves as it becomes obvious that he is holding to them out of some philosophical decision rather than what actually makes sense for the characters. The prime example here is the decision to keep his lead non-verbal throughout. This principal is held to so doggedly - he never speaks to himself, never talks through a problem, never vocalizes fear when there is gunfire nearby, etc - that it becomes progressively more distracting as the film moves along, particularly when viewed next to his eventual Chinese companion who does speak and react as you would expect a man in these circumstances to do. The silence eventually breaks towards the end - and does so in a way that should have happened at least 18 hours in the lives of these men earlier if they were behaving as people actually would - and when it does happen it is thoroughly anticlimactic and actually tips the events that come next because ... well, there's really only one reason that Wilson would be willing to break a rule held to so closely for so long and, yep, as soon as you think, "Well, now this is going to happen," that's what happens.

And, finally, Chittenden simply doesn't have the range and charisma to keep an audience engaged and engrossed in a non verbal performance for as long as he is required to do, particularly not when sat next to the far more engaging performance delivered by the stellar Mo Tzu-yi as his Chinese companion. It's honestly quite difficult to say whether any shortfalls on Chittenden's performance are more due to his own skill or the limited range of what he was given to do by Wilson but he appears to have only one scared face and he uses it often.

Canopy is a film that sets out to be an immersive experience and ends up settling for being an interesting experiment instead. that's not an entirely bad place to be, really, but it is less than what it could have been in surer hands.