Opening: Calm Down, THE WIZARD OF OZ Sparkles In 3D 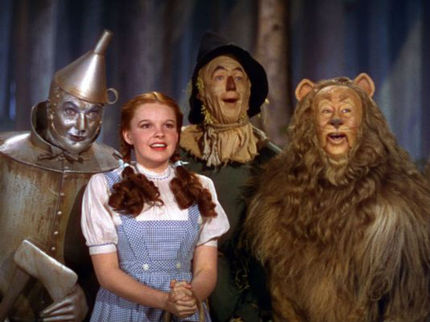 An innocent young farmgirl gets tangled up with three dysfunctional drifters and ends up killing two people. What else is there to say about The Wizard of Oz?

Like millions of children in the U.S., I grew up watching The Wizard of Oz on television every year. Though my family couldn't afford a color television (?!), I sat before the boob tube to watch Dorothy, Toto, and her friends travel to a magical land where the imagination reigned. I saw it so many times that I thought it had been stitched into my DNA, and when I reached my teens I turned away from L. Frank Baum's children's fantasy, as adapted for the screen by the MGM dream factory in 1939, in order to pursue my cinematic interests elsewhere.

The magic had gone away, I thought, and a couple of viewings over the years -- in color! on TV! -- did nothing to sway my opinion that I had outgrown the tale.

Now that the film is heading back into theaters -- in 3D! in IMAX! -- I couldn't resist another peek, and, lo and behold, my tears flowed early and often. The restoration via Warner Bros. looks splendid to my old and wizened eyes, and the experience of being enveloped by the beauty of the fine-tuned sepia tones, eye-popping three-strip Technicolor, and the majesty of the orchestral score on a large screen (albeit not a full-sized IMAX) is not to be missed.

Those who are not well-versed in classic cinema may need to be make certain allowances for the period. Some of the songs creak and groan, and the Munchkinland sequence seems to drag. Bearing in mind that this is a 74-year-old musical, however, it remains very sprightly and smart entertainment. I plumb forgot how well the prologue sets up every major character, and the nimble footwork by Judy Garland, Ray Bolger, Jack Haley, and Bert Lahr is consistently impressive. Given that these are intentionally broad characterizations, Lahr and Margaret Hamilton stand out for taking things over the top and then back again. But I would place the sequence that begins with the attack in the haunted forest and continues to the witch's castle alongside the finest action setpieces of today.

When I saw a restored version of The Lion King in 3D a couple of years ago, I found myself distracted by the noticeable changes for 3D that I felt affected the meaning of certain scenes. No such negative distractions arose while watching The Wizard of Oz. If anything, 3D enhances the backgrounds, adding depth to what we know to be painted sets for a film shot entirely on stages in a studio. The special effects hold up remarkably well, though I imagine they may have been digitally tweaked for this release.

As for those tears, well, the sight and sound of 16-year-old Judy Garland singing "Over the Rainbow," knowing the rocky road that lay ahead for her personally, is heartbreaking. Once that emotional dam was broken, I began making other emotional connections to different moments, to the sheer wonder and lost innocence and nerve-grabbing terror. (We can talk about the film's final message as a horribly reactionary sentiment some other time.) Maybe it's wallowing in nostalgia to give myself over completely to a film that captivated me as a child and, once again, made me weep as a middle-aged man.

If so, guilty as charged.

The Wizard of Oz 3D opens in select IMAX theaters in the U.S. on Friday, September 20. Visit the official site for more information.

Do you feel this content is inappropriate or infringes upon your rights? Click here to report it, or see our DMCA policy.
classic cinemaJudy Garlandmusicalpostconversion 3d

More about The Wizard Of Oz