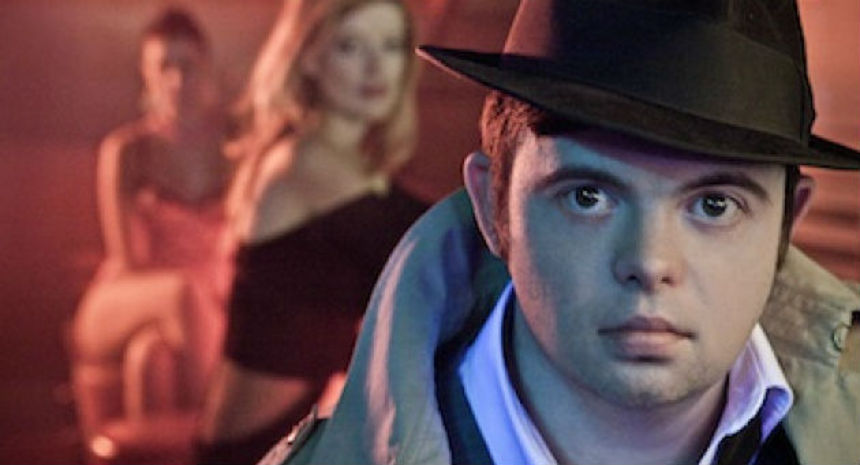 A lot of movies about mentally disabled private investigators are gimmicky and insensitive, but not Detektiv Downs! This is surely the most warm-hearted and clever Norwegian movie about a detective with Down syndrome that I have ever seen.

What possesses a man like Bard Breien to write and direct a movie in the traditional Bogart noir style but with a protagonist whose world-weary cynicism has been swapped out for a chromosome abnormality? I don't know, but I'm glad he did, because this is one of the more pleasant surprises of the year, a film that works as a straightforward P.I. mystery as well as a tweak of the genre.

Our gumshoe, Robert Bogerud (Svein André Hofsø), has a hat, a trench coat, and an office, but he can't seem to get any clients. Why? Well, because he has Down syndrome. Duh. Neither he nor the movie has any illusions about that. Some potential clients are polite when they meet him face-to-face and change their minds; others are not. Robert's father, a detective with the local police department, is embarrassed by his son's play-acting. But Robert believes his natural empathy can truly help him to help others.

He gets his chance when a leggy dame hires him to find her husband, former world-champion speed skater Olav Starr, who went missing a few days ago. As it happens, the family -- which includes Olav's corpulent adult son and sullen fashion model daughter -- doesn't actually want him found, hence the hiring of a detective they're sure won't be able to do it. But Olav's elderly mother, unaware of her daughter-in-law and grandchildren's ulterior motives, sees goodness in Robert and puts her faith in his abilities.

Having already established its noir bona fides with suitable lighting and music, the film now unspools just like a classic detective story, only a bit dirtier (wait'll you find out Olav's family's secrets!) and with most of the suspects and witnesses declining to take the P.I. seriously. In the process, Breien revels in kooky details and enigmatic supporting characters (played by Sven Nordin, Ida Elise Broch, Nils Jørgen Kaalstad, and Kari Simonsen), and in his lead actor's charming, unaffected performance. Just as Robert is aware of his limitations but refuses to be hindered by them, so Hofso's work in the film implies that he feels the same way.

You have two fears going into a film like this. Either it's going to be exploitative and uncomfortable, or it's going to be sentimental and preachy. Thankfully, it's none of those things. This isn't a "message" movie. Only tangentially does it address society's treatment of the disabled, or the stigma facing people with Down syndrome, or anything else along those lines. We don't get patted on the back for being so open-minded and compassionate as to accept an actor with Down syndrome into our movie.

What we find instead is an upbeat theme of trying to understand each other and letting people find their own happiness, all expressed within the formula of an honest-to-goodness legitimate detective story. Maybe that's another way that it's different from something Bogart would have starred in: you leave feeling optimistic.

Do you feel this content is inappropriate or infringes upon your rights? Click here to report it, or see our DMCA policy.
Down syndromeFantastic FestFantastic Fest 2013FF 2013Norway