Review: WE'RE THE MILLERS Smuggles a Few Kilos of Laughs Across the Border 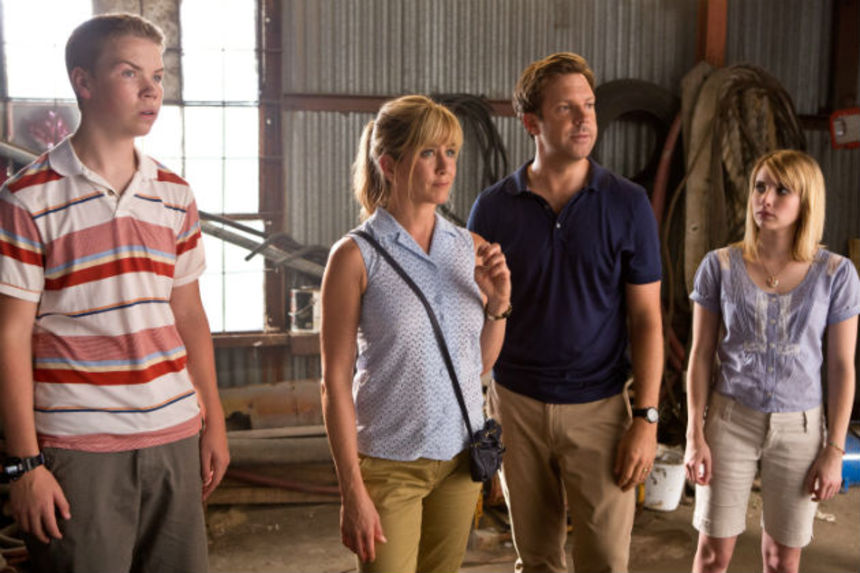 There isn't much about We're the Millers that separates it from the typical snarky, quasi-feel-good raunchy comedy, but it deserves credit for one thing: finding a new twist on the familiar premise of mismatched strangers being forced to take a road trip together.

In this scenario, a shiftless Denver weed dealer named David Clark (Jason Sudeikis) must settle a debt with his wealthy supplier (Ed Helms) by smuggling some marijuana -- "a smidge, maybe a smidge and a half" -- from Mexico into the U.S. To avoid suspicion at the border, David has the genius idea of gathering some accomplices, piling into an RV, and pretending to be a typical (read: nerdy) middle-American family on vacation.

Now, why David has to recruit near-strangers, I don't know. He might be the first marijuana dealer in history not to have any friends. His stripper neighbor, Rose (Jennifer Aniston), with whom he has already established a we-hate-each-other repartee, is willing to do it for a cut of the money. (Scenes at the club where she works, with the wonderfully sleazy Ken Marino as her boss, establish that stripping has not turned out to be a job with a lot of career advancement.) Another neighbor, 18-year-old virgin Kenny (Will Poulter), is wholly unsupervised by his mother and just wants someone to hang out with. The makeshift family, the Millers, is rounded out by Casey (Emma Roberts), a cynical, potty-mouthed, semi-homeless teen.

Thus begins a buoyant comedy that remains afloat as long as it concentrates on barbed humor rather than real emotions. Sudeikis, making a bid for the above-the-line stardom he deserves, plays a selfish jerk of a leading man in the Vince Vaughn tradition, while anyone who's surprised to find that Aniston is terrific at playing coarse, messed-up women hasn't been paying attention. Poulter and Roberts, both better known (to the extent they're known at all) for more innocent roles, complete the ensemble with gusto. The indispensable Nick Offerman and Kathryn Hahn also do valuable work as a squeaky-clean married couple whose RV travels parallel the Millers'.

It was directed by Rawson Marshall Thurber, of Dodgeball fame, and written by two pairs of R-rated veterans: Bob Fisher and Steve Faber (Wedding Crashers) and Sean Anders and John Morris (Sex Drive). If that sounds like too many cooks for one fairly straightforward entree, it is, and the story is padded with madcap episodes that vary wildly in quality. Good: the family's efforts to bribe a Mexican police officer (Luis Guzman). Bad: all the business with the pissed-off Mexican drug lords, who are in the story only to provide action, danger, and noise. And it's a familiar refrain by now, but this slight and inconsequential film runs out of steam long before its 110-minute running time has finished.

It's also bogged down by the attempts to turn what is essentially a pitch-black farce into something genuine. Predictably, all of this pretending to be a family makes the four gradually develop actual affection for one another, which the film conveys in dewy-eyed moments like Rose feeling touched when she sees David give fatherly advice to naive Kenny. I love the theme of "family" not necessarily being limited to one's flesh-and-blood, of lonely strangers creating improvised family units for support.

But this story, with these characters doing these things, doesn't provide a convincing framework for it. We accept that comedies need a little heart to connect with audiences, and we're willing to allow it as a formality. Yes, yes, sure, they all grow to like each other. Whatever you say. Trying to convince us it's happening in an authentic, emotional way is a waste of time. When the film sticks to the jokes, it's a breezy pleasure.