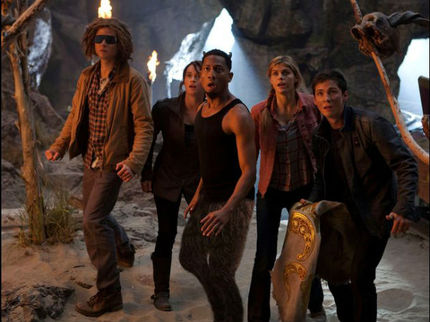 Having missed 2010's Percy Jackson & the Lightning Thief because of reasons, and then never catching up with it due to factors, I was at a disadvantage when it came time for Percy Jackson: Sea of Monsters. But I was also free of preconceived notions. Since I didn't have an opinion of the first film, I didn't approach the sequel with any idea of whether it was likely to be good or bad. I was a blank slate!

Speaking of blank slates, this movie stars Logan Lerman: so sweet in The Perks of Being a Wallflower, and such a bucket of white paint everywhere else. He plays the title character, a seemingly ordinary teenage boy who discovered in the first film that his father is Poseidon, god of the ocean. This grants Percy certain powers that occasionally and randomly manifest themselves when the situation calls for it, but not as often as you'd think.

In Sea of Monsters, Percy lives at Camp Half-Blood, a Hogwarts-ian summer camp for demigods, centaurs, and satyrs. (Cyclops are considered weird, though. I don't understand the rules.) Percy is a bit of a legend because of what I gather were impressive world-saving accomplishments in the first film, but he worries about being a "one-quest wonder." His hotshot rival, Clarisse (Leven Rambin), taunts him, while his friends -- Annabeth (Alexandra Daddario), daughter of Athena, and Grover (Brandon T. Jackson), a satyr -- support him by being smart and comical, respectively.

The quest this time concerns the Golden Fleece, the healing properties of which are needed to repair the magic forcefield that protects Camp Half-Blood from the forces of evil. The forces of evil are represented by a jowly teen named Luke (Jake Abel). He is the son of Hermes, and he has joined the faction of demigods who want to resurrect Kronos the Titan so he can kill everybody. Clarisse and a different satyr embark on the journey to nab the Fleece from the cyclops who keeps it as a security blanket. Then, for some reason, Percy also goes on the same quest, accompanied by Annabeth, Grover, and Tyson (Douglas Smith), Percy's cyclops half-brother who was the result of Poseidon gettin' it on with a nymph. Adventures ensue. 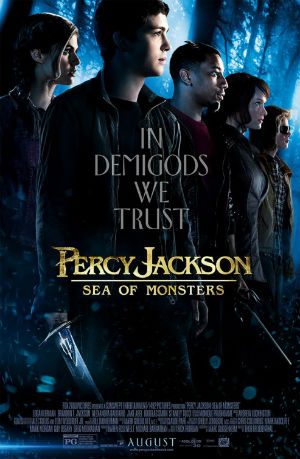 As far as kid-oriented fantasy films go, Sea of Monsters isn't bad -- but it isn't memorable or distinctive, either. The story is less intense than Harry Potter (the obvious comparison), with fewer fatal consequences -- there's a whole lot of "Oh, we thought for sure you were dead!" going on here -- and the mythology is quite a bit less complicated. That's the movie, anyway. Even without having read any of Rick Riordan's novels, you can tell from the film's hurried pace and general superficiality that a lot of material has been excised. Camp Half-Blood's adult leader, Dionysius (Stanley Tucci), is ineffectual; Chiron (Anthony Head), the centaur who is apparently the only teacher on staff, has one function, and it's to warn Percy about ancient prophecies in much the same way Giles used to mentor Buffy.

The director is Thor Freudenthal, whose previous films, Hotel for Dogs and Diary of a Wimpy Kid, must have prepared him for working with animals and Logan Lerman, respectively. He has a light, anonymous touch. I'm not exaggerating when I say the most entertaining part of the film is Nathan Fillion's one (1) scene as Hermes, the messenger of the gods who now runs the gods' equivalent of UPS. He helps our li'l heroes prepare for their perilous journey by giving them highly specific tools that they will coincidentally end up needing -- and he has more energy, personality, and humor than the rest of the movie combined.

A lack of personality is the film's only major problem, but it is major. There are three more books in the series. My reaction to the prospect of three more movies like this one? Complete apathy. Make 'em, don't make 'em, whatever. This might be the only franchise fueled entirely by shrugs.