Review: CLOSED CIRCUIT, What A Pity About That Government Conspiracy 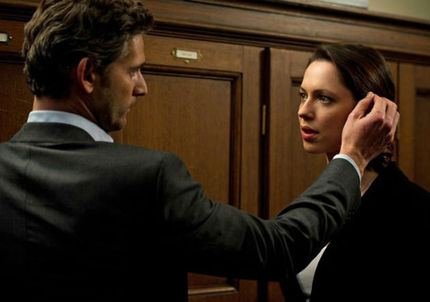 Percolating without ever boiling over, Closed Circuit is a British conspiracy drama that's content to serve a cup of room-temperature tea, sit back, and shake its head with mild disapproval. What a pity, eh?

The title refers to the closed circuit cameras that blanket London, and the efficient direction by John Crowley (Intermission, Boy A) makes constant reference to them and the unseen observers who are always watching. The original screenplay by Steven Knight (Dirty Pretty Things, Eastern Promises) feels ripped from the headlines: 140 people are killed when a bomb explodes in a busy market.

The only surviving suspect, Farroukh Erdogan (Denis Moschitto), is held for trial; the British government decides that top secret evidence will be used to prosecute him, but it is so secret that neither the defendant nor his court-appointed barrister, Martin Rose (Eric Bana) are permitted to see it. Thus, the government appoints a Special Advocate for the defense, Claudia Simmons-Howe (Rebecca Hall), who has top-secret clearance. She is to analyze the top-secret evidence and then argue for relevant material to be made public in open court and/or be used in defending Erdogan.

For those of us not familiar with British law, it's an alien landscape to navigate, but the script and direction lay things out in a fairly straightforward manner, and the salient points quickly come to the fore. The first is a personal matter: Martin and Claudia had an affair in the not-too-distant past, one that ended badly and contributed to the breakup of Martin's marriage. Legally speaking, that would seem to disqualify them from the case, but it's a movie and so they feel free to cover up the truth. 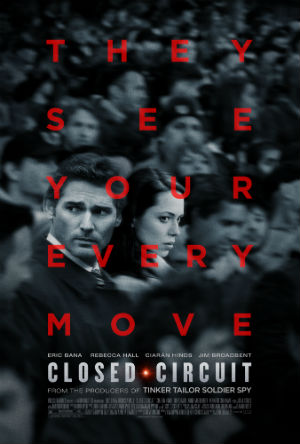 Coming as early in the story as it does, this point neither qualifies as a spoiler nor suggests that the movie will be much different than a thousand other legal dramas, despite the timely and relevant issues at stake. Indeed, Closed Circuit plays out much as one would expect, given the starting point and the characters involved.

As conspiracy dramas go, this one is not particularly nuanced. Rather than white-knuckle twists and turns in the narrative, Closed Circuit prefers gliding gently into curves with seat-belts firmly attached to prevent spillage. It's all very proper and indignant, without much genuine outrage or passion expressed, lips and gums flapping and spluttering, and the heart rate soon returning to normal.

Closed Circuit is not a badly-made film. It features sturdy performances by reliable, steady, and true actors -- in addition to Bana and Hall, the large cast of supporting players includes Ciaran Hinds, Jim Broadbent, Riz Ahmed, and Julia Stiles -- as well as handsome production values. Yet it's not particularly gripping. It's not enough to rip a story from the headlines, add a layer of paranoid government conspiracy, and assume that's sufficient to get anyone excited, anxious, or upset in the 21st century.

Sorry to say, we've heard that story too many times before. Many people are convinced that conspiracies are afoot, and nearly everyone knows that Big Brother is watching, and personal privacy is gone. Now, what do we do with that information? Going to see a tepid drama that raises its hand meekly in protest is not enough.

Closed Circuit opens wide in theatres across North American on Wednesday, August 28, via Focus Features in the U.S. and Alliance Films in Canada. Check local listings for locations and showtimes. The film also opens tomorrow in Japan, and will open in the UK on November 1.

Do you feel this content is inappropriate or infringes upon your rights? Click here to report it, or see our DMCA policy.
Ciaran HindsEric BanaJim BroadbentJohn CrowleyRebecca Hall