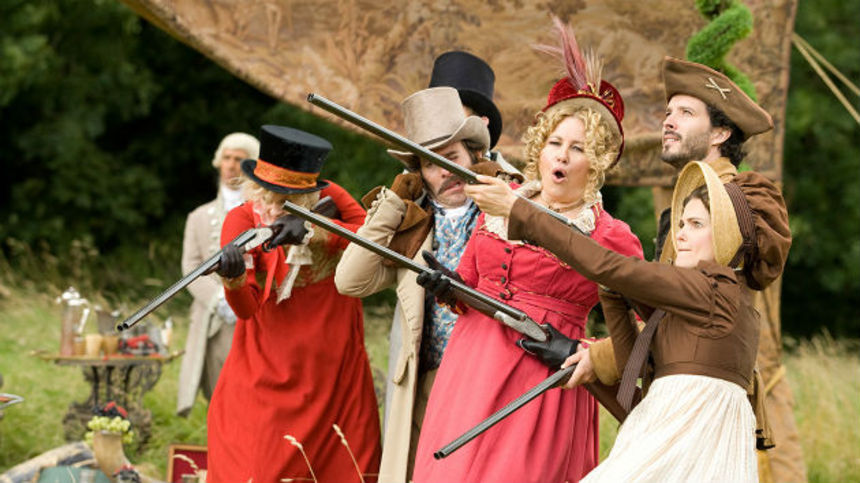 It is a truth universally acknowledged that a single lady who obsesses over the works of Jane Austen -- particularly Pride and Prejudice, and specifically the 1995 miniseries version with Colin Firth -- will find her real-life boyfriends lacking when compared to the dreamily perfect Mr. Darcy. This subclass of fandom was explored amusingly by Shannon Hale in her 2007 novel Austenland, a fluffy bit of chick-lit that I am not ashamed to say I read and found quite agreeable, even though I am a boy.

Well, not to be one of those "the book is better than the movie" people, but holy crap, what an insufferable load the Austenland movie is. In the hands of Jerusha Hess, who co-wrote her husband Jared's films (starting with Napoleon Dynamite) and is here making her directorial debut, what was once a reasonably charming story has been turned into a broad, clumsy, and embarrassing romantic comedy. Hess' screenplay adaptation (Hale gets co-writer credit) makes the story dumber and shallower -- and it was not very smart or deep to begin with!

The winsome Keri Russell flails and flounders as Jane Hayes, a 30-ish nincompoop who's pathetically fixated on Colin Firth's Mr. Darcy and the general early-1800s-England vibe of Austen's books. Not content merely to have "DARCY WAS HERE" written over her bed and her apartment cluttered with era-appropriate doilies and teacups, Jane blows her life savings on a week-long trip to an Austen fantasy camp in the English countryside, where she and a few other paying customers wear period costumes and employ period manners while handsome actors playing 19th-century gentlemen chastely woo them.

Two other women are at Austenland with Jane, and all three operate under character names; Jane is Miss Jane Erstwhile. Miss Elizabeth Charming is played by Jennifer Coolidge, so you know what she's like: ditzy, busty, oversexed, and completely uninterested in Jane Austen (she's here for the romance). The third is Lady Amelia Heartwright (Georgia King), younger and prettier than Miss Erstwhile. The whole enterprise is overseen and regulated by the fussy Mrs. Wattlesbrook (Jane Seymour).

The most Darcy-like of the available menfolk is Mr. Nobley (JJ Feild), whose coldness is presumably meant to rouse the interest of patrons who are drawn to that sort of thing. But Jane instead falls for Martin (Bret McKenzie), the stable hand, who will break out of old-timey character when Wattlesbrook isn't around and make Jane feel more at ease. 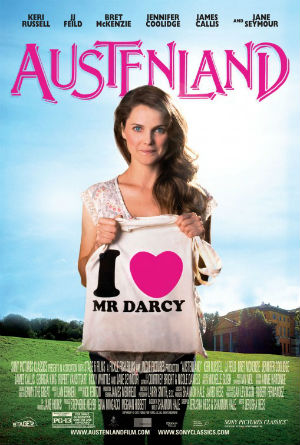 Because, you see, despite having spent her life savings on this role-playing trip, Jane refuses to immerse herself in the role-playing. She mocks the formal language and frilly costumes and stiff manners -- the very things she adores and fantasizes about and came all this way to experience. Why DID she come here? What did she hope to get out of it? The movie gives us no clue. Hess stripped the book of its characterization and exposition, which were rudimentary but serviceable, and instead gives us an inscrutable protagonist who can't be said to achieve or not achieve her goals because we don't know what they were.

Hess prefers to convey information by way of montage set to an '80s pop song. I was keeping track of how many such montages there were, but I lost count after one trillion. Comedy-wise, there are many forced references to Jane's accommodations and overall experience being less than the others' because she couldn't afford the better package, and some business "backstage" at the manor when the actors are on break. Most of the gags fail to land; many don't even launch. Nearly all of the laughs that do occur come from Miss Charming's dim but enthusiastic attempts to speak the King's English. Bless you, Jennifer Coolidge, but there's even too much of you.

The one advantage this has over the typical romantic comedy is that there's no obvious answer to the question of how it will end. Jane could wind up with sweet Martin the stable boy, dull Mr. Nobley or one of the other suitors, or nobody. Naturally, the film botches it: the choice she eventually makes is unsatisfying, not to mention carried out in a hurried, implausible manner. Maybe it's fitting that a movie about an emotionally stunted woman is nearly devoid of any recognizable human behavior.

Review originally published during the Sundance Film Festival in January 2013. The film opens in limited theatrical release in the U.S. on Friday, August 16. Visit the official site for more information.