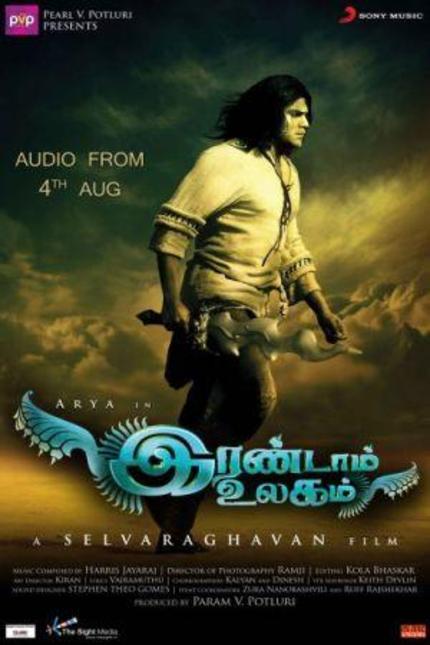 A few days before the ridiculously loud trailer for Krrish 3 exploded online, a trailer for another highly anticipated fantasy film made its bow, and this one feels much better to me.
Irandam Ulagam is the latest film from acclaimed Tamil language director Selvaraghavan, who happens to be the brother of one of India's finest young actors, Dhanush K Raja. Irandam Ulagam is a two part story set both in the real world and in a fantastical land that appears to be wonderfully realized in Selvaraghavan's hands.

As is normally the case, not much is known of the plot. Even the official descriptions are hesitant to go beyond calling it simply a romantic drama. However,it looks quite ambitious, and ambition is something that is sorely lacking in mainstream Indian films these days. The inventive use of CG and action choreography look like they've grabbed a pinch of this and a dash of that from other fantasy films, but it appears to create a cohesive whole as far as I can tell from the small amount of footage in the trailer. I'm definitely curious, and the FX appear to be top notch, let's hope that the final product bears that out.

Irandam Ulagam's cast is led by Arya, who ScreenAnarchy fanatics might remember as the star of Bala's Naan Kadavul, the last Indian film to play at Fantastic Fest back in 2010. Arya has a pretty solid track record, so I'll leave him to his work and not try to guess how he'll turn out. His female lead is Anushka, who seems to be in every other Tamil blockbuster these days. She was last seen in Hari's disappointing Singam 2, but she also has appeared in a number of very solid films, so I'll not count her out completely yet, either. She's also currently shooting with my hero, SS Rajamouli, for his upcoming film Baahubali with Prabhas.

Irandam Ulagam is set to release, well, sometime soonish. As is often the case, no firm release date has been set, but the release of the full theatrical trailer bodes well for a prompt release.