FANTASIA 2013 Review: BOOZIE MOVIES Has An Existential Crisis With 24 EXPOSURES. But The Boobs Were Nice! 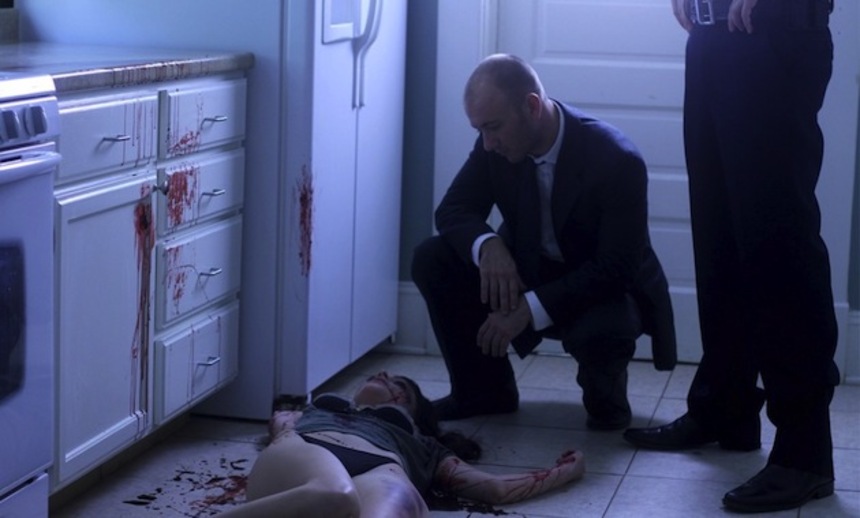 After seeing 24 Exposures at its international premiere at Fantasia, I was inspired to take a good, long, hard look at myself. That night, I spent a large portion of time staring into my hotel room's bathroom mirror with a handle of cheap Canadian whiskey in one hand and a pair of hair clippers in the other.

I entered a trance. I was transfixed. I couldn't take my eyes off of my mustache and soul patch. My eyes strained from staring so hard. My facial hair began to take on a new form like one of the those magic 3D posters from the 90's.

The hair that had been growing out of my own skin for so many years no longer seemed to belong to me. It was part of something much bigger. It was part of a subconscious indoctrination into a secret group that I've just come to realize that I'm part of, the group of smarmy asshole filmmaker artists.

I broke out into a cold sweat as I developed an entirely new existential crisis for myself. In only a few minutes that crisis breached forward into a full on panic attack.

I had to shave my mustache and soul patch, it was the only solution.  It was the only way to break free of this asshole, filmmaker, artist cult  that I didn't never knew I had always been a part of. But my hands trembled with an even greater fear. I couldn't bring myself to do it.

If I shaved my mustache and soul patch, would I cease to exist? I've had facial hair since I was 11. It's been a part of me so long that I'm not even sure if I'd recognize myself without it.

It was like holding a loaded gun in my mouth. The hammer was pulled back but I couldn't pull the trigger and the whiskey wasn't making it any easier.

I sat on the toilet, overcome with a soul crushing anxiety as I stared at the hair clippers in my hand. It was just like a scene in 24 Exposures where a suicidal alcoholic cop attempts to shoot himself in the bathroom.

This film is what brought me to this situation. It's why I'm not sure if I can continue being me.

You see, Adam Wingard plays Billy Wingard in Joe Swanberg's 24 Exposures. And Billy Wingard is really just a hyper realistic variation of the actual Adam Wingard. Although, if you've ever visited Adam's Tumblr page, you may have to wonder just how hyper it is.

Billy's personality isn't nearly as morbid as his art would imply. He has an attractive girlfriend who helps him with his projects, he's flirtatious with his models, and he has penchant for sleeping with most of them.

Billy is not a likeable character; in fact, most people are going to hate him.

Fuck, I think I might be this character. I think a lot of us here at ScreenAnarchy and out there in the cool kid blogosphere world might.

It's kind of like Lena Dunham. I don't like what she does, but then again, I can't debate the validity of it.

It's authentic, but not emotionally resonant.

Some believe in the creed that film should be a representation of reality, that filmmakers should strive towards holding up as accurate of a mirror as possible.

Cinema has had numerous movements that captured these beliefs. There was the neo realist movement of the forties and fifties that showed us the harsh realities of poverty and oppression,  and of the horrifying consequences of a World War with filmmakers like Rossellini. There was the cinema verite movement of the 60's and 70's which documented a cultural revolution and revealed the free spirited and careless lifestyles of a new economic class of bourgeois bohemians and drug culture freaks with  filmmakers like Cassavetes. Then there was the post modern abstract experimentation of Dogme 95 with filmmakers like Von Trier.

And now there's the DIY spirit of mumblecore, a genre about privileged white kids sitting around smoking pot, getting drunk, and whining about first world problems .

It's easy to hate, but it's hard to dismiss.

The genre can and has been a fairly acute reflection of us.

The press materials for 24 Exposures may have you believe that Joe Swanberg has crafted a genuine genre film and that it might be time to lay all of those mumblecore jokes to rest.

The film opens with a Saul Bass influenced title sequence full of sleazy pulpish images before cutting to a wide angled crane shot of a murder scene.

Already In these first five minutes, the film establishes itself as a major departure in style and technique for mumblecore icon, Joe Swanberg.

We meet Adam Wingard's Billy as he is snapping pictures of a dead nude woman. For a moment, the audience is left wondering if they're watching a police procedural sequence before we realize that the dead girl is just pretending. Billy is actually an artist. He's not a member of a forensic team.

And 24 Exposures immediately reverts to being a typical Joe Swanberg picture and any prospects of it being an intense or provocative/deconstructive thriller about pornography and art is immediately squashed.

There is plenty of nudity and there is a murder or two, but beyond the intentionally tacky music cues, 24 Exposures is still far more comparable to Kissing on the Mouth than it is to Red Shoe Diaries.

Swanberg introduces an element of mystery early on when one of Billy's models is found murdered.

It's a sequence that may be confusing to the viewer because the body is still visibly breathing as the police stand around inspecting her.

Is it real? Or is it pretend again because she's clearly fucking breath in the shot? Is this intended as a mind fuck or is it just lazy film making?

So there is an investigation into Billy and his photography and his relationship with his models, and that investigation lasts for all of about 5 minutes.

The detective tasked with questioning Billy is played by Adam Wingard collaborator, Simon Barrett who co-wrote A Horrible Way to Die and You're Next.

There's no tension or suspense in the investigation. Billy didn't do the crime and he instantly becomes drinking chums with the depressed cop. We know he's depressed because there are empty booze bottles everywhere in his apartment.

But in only a 77 minute running time, the film completely drops the central conflict that serves as its own main premise around the half hour mark.

Billy continues to sleep around with a bunch of his other insecure hipster chick models and his bi sexual girlfriend finally gets jealous when she sees that he may be banging girls in their home when she's not around. But it's only because she wasn't around, otherwise, it totally would've been cool. And then there's another model who develops an unhealthy obsession with Wingard and the film eventually comes back to its initial concept for the last few minutes, but not really.

There are two other brief glimpses of violence that are set up to possibly tie the initial mystery together from the beginning. But as soon as Swanberg gets back to teasing the audience with a legitimate genre film, he flips them off with a snide and insulting final act.

Some audience members were furious, others pretended to be offended and jumped up on their self righteous ass hat horses by grilling Joe during the Q & A.

The dick head who blurted that out did so with that kind of smirk that's supposed to show everyone else around him that he's a much better man who's brave enough to stand up for all of the women who consciously and consensually agreed to be in Joe Swanberg's film.

24 Exposures introduces and hints at greater themes that deal with the nature of art and pornography, but it doesn't really develop any of it. And even with all of the nudity and sex, the film is far too tame to be considered a transgressive work.

Adam Wingard's character is definitely inspired by Richard Kern, but 24 Exposures is sure as shit no Fingered.

It's the perfect film to be stuck having to hold your piss when you're trapped in the middle of the row at a sold out theater.

If you're a fan of Swanberg's previous work, you're likely to be a fan of this. If you snicker at the mere mention of mumblecore, this will only serve as more wood to the fire.

But there is something authentic to the more intimate moments between the characters and it's a fairly painless watch.

Two days later, every time I've gone to the bathroom, I've glanced at those clippers, wondering if it's time to shave and leave the artist image behind.

But I came away from the film and its subsequent Q & A feeling much like Brian Cox when he played screen writing guru, Robert McKee in Adaptation with Swanberg obviously being Nicolas Cage's character.