Review: EXIT ELENA, A Sweet And Bizarre Home Movie Like Few Others 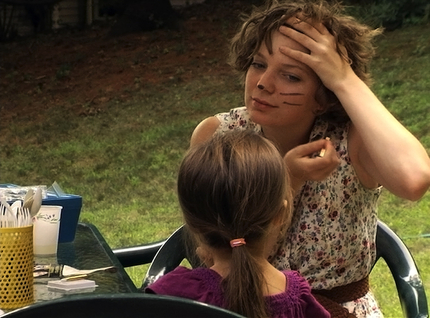 The opening of Nathan Silver's second feature Exit Elena presents a series of images that are so simple and practical in nature, (not just because of the consumer grade camera the movie was shot on, but also by plain sight) that there's something actually rather extraordinary about them.

We watch as 19-year old Elena (Kia Davis) completes the final test to become a certified nursing assistant. These moments are clunky and awkward. She struggles with a support strap, but manages to calmly talk her way through it with a gentleness and politeness that befits someone perhaps reserved and, indeed, as we're to find out, a little unsure of herself. The camera stays static as Elena goes through the motions with her practice patient. It dawns on us that perhaps we're in the middle of some kind of inside joke, becoming privy to the remnants of a home movie we weren't meant to see -- or perhaps the all-too-human outtakes of some ludicrously utilitarian instructional video.

Where Silver welcomes us into and continues to lead us towards and through in Exit Elena, are the kinds of moments that most filmmakers concerned with a bigger picture would shy away from or sideline entirely. But Silver and his small family sized cast and crew (made up of yes, some of his actual family) are not so concerned with big pictures. Here they present the little moments of doubt, of inarticulation amidst a dribble or babble of words and then the terrible (and terribly funny) pauses; Exit Elena is built upon these not so perfect tries. These are the b-sides of life: perhaps not the best, most pristine takes, but it's where the truth lies.

Certified and with her first job booked, Elena exits the city for the wondrously bland suburbs of the Northeast. She is a stranger in a strange land, a good Samaritan who has lost her way, though she knows exactly where she is headed: To the Ackerman's house. Within minutes of her arrival, doubts of whether she should be here kick into high gear as Jim (Jim Chiros) argues with his wife Cindy (Cindy Silver) over the need of a live-in nursing assistant for his aging mother Florence (Gert O'Connel). Cindy favorably (if unknowingly unfavorably) compares Elena to the stray cat they recently took in. Not a good sign for your first day on the job. Through all this Elena remains professional, focusing on getting to know Florence and her needs. But with Cindy and Jim coming to verbal blows, she can't but feel a little more than incapable, and no doubt, uncomfortable.

The fact is that if she were just allowed to do her job the family would see that Elena is a very capable, patient and kind person. But Cindy is more interested in being a friend to Elena rather than just her employer. While indeed well meaning, Cindy is overbearing, and incessantly insistent, pestering Elena about the oddest of things, like how she can't close the bedroom door too tightly or else she won't be able to get out if there's a fire. She's always offering Elena seltzer or wine and insists that she shouldn't have to wear her nursing uniform but her normal clothes. Jim, meanwhile frets over a series of ever illusive business meetings at the house. He seems like a decent guy, but is more often than not irritable.

Elena sketches unflattering cartoons of Cindy in her notebook and smokes on the porch: her only moments of respite in a household bursting with manic banter. What's worse is the shadow of the Ackerman's grown son Nathan (played by Silver himself), who Cindy speaks to on the phone as if he's a small child. Emotionally volatile, Jim brings Nathan home and a new family dynamic begins to unravel, then topple right in on itself. Just prior to his arrival, Nathan's mother describes him in a baby picture as "the essence of agony". A twitchy and flustered young man he makes some oh not so subtle advances on Elena. By this time Florence has been taken to the hospital after a fall, and Elena finds herself in limbo with these people who now insist she stay even if they have to pay her off the books. Is she really that desperate and that lonely to let herself be caught in the crazy clockworks of this family?

Navigating the emotional mind field of an entire household, not to mention already the tricky paths of herself, Davis' (who also co-wrote with Silver) gives a performance that is charming and endearing in all its awkward steps. She brings a weighted and tempered curiosity, and an all too comical (and thus very human) reluctance to the proceedings. Cindy Silver as her employer is painfully funny, and occasionally very frightening (especially for those with mommy issues). Cindy wants nothing but the best, but can't take no for an answer. The young woman and older woman do in fact get along from time to time. When Jim leaves to pick up Nathan, Cindy seems lighter, less tightly wound. She and Elena laugh over a bottle of wine, and play in Florence's wheelchair. As the evening winds down, the women sit outside where Elena shares with Cindy a beautiful snippet of a Serbian folk song. The core of this dark comedy then lies in these two women's relationship, which proves more than most movies that, heck, there may be no fine line at all between the personal and professional. It's just all awkwardly mashed together.

By the end, Elena has survived the Ackermans -- and they've survived each other for the umpteenth time. Still quite the wayward soul, she is nonetheless stronger for this experience. She now knows her limits and boundaries a bit more, and in a not so subtle, but still outstandingly clever nod (or is it a burn?) to Blake Snyder's book on screenwriting, she saves the cat. Which is always a good thing.

Despite the film's manic and caustic trappings Silver's filmmaking is even-handed and gentle. David Dahlbom's camera is steady, panning and zooming with an astute gaze, finding the absolute bizarreness of reality and holding onto it with a fondness and sadness that follows in the tradition of late Bunuel absurdities and the forthright, often times brutal humanity of John Cassavetes' lo-fi home-movie implosions. Exit Elena tackles being young and getting old, being alone and getting desperate with a sensitivity and care that has absolutely made it one of my favorite films of the year.