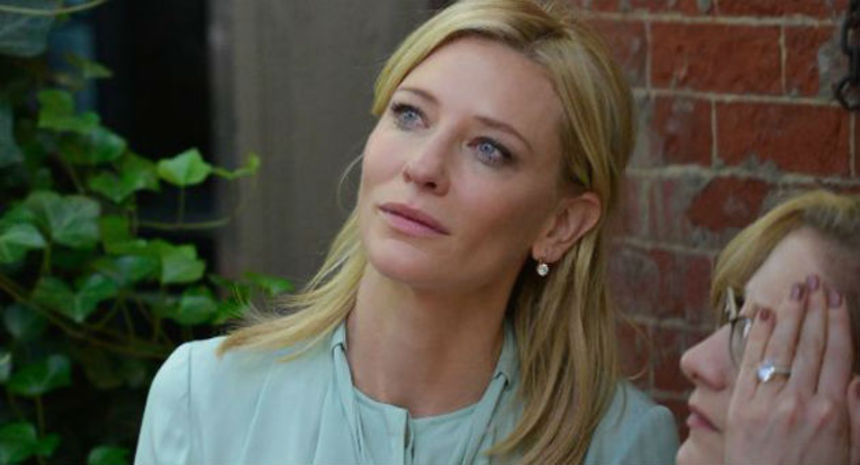 Rowing against the wind with the fractured persona of a brilliant Cate Blanchett at the helm, Woody Allen's Blue Jasmine is extraordinary, ignorant, belittling, audacious, stupid, perceptive, and maddening, a rollercoaster of stirred-up emotions and acidic social commentary.

Blanchett is absolutely spellbinding as the titular character, a woman who has lost her wealth and must move in with her blue-collar sister in San Francisco. Jasmine lived in a gleaming, cosseted bubble in New York, her every material whim provided instantly by her fawning husband Hal (Alec Baldwin), a financial wheeler-dealer who has been brought low. She was a confirmed member of the 1%, the chosen few citizens who control a disproportionate share of the wealth and power in the United States, if not the world, and enjoy a luxurious lifestyle that the other 99% can only dream and/or seethe about.

To say that Jasmine has a difficult time adjusting to life outside that bubble is to underscore the obvious. Even as she jets into the city by the bay, she can't stop talking to her puzzled seatmate, a stranger who can't wait to get away from her. It's an experience that will be repeated throughout the film, a clear signal that Jasmine has cracked on a fundamental level.

She is so wrapped up in her own troubles, however, that she hasn't the faintest idea how to ask for help, and may have edged too close to the abyss to realize how precarious her position has become. Yet she is still able to pull outfits together and make herself look much more than presentable; from a physical standpoint, she's a sexy, desirable, eligible woman with refined manners. Simultaneously, her disdain for those she considers inferior is infuriating and repulsive. 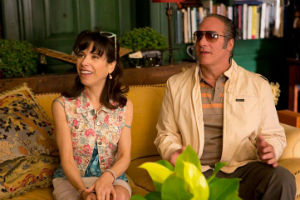 Jasmine and her sister Ginger (Sally Hawkins) were both adopted; while Jasmine changed her name and married as quickly as possible into Manhattan high society, Ginger was left behind to fend for herself. She married the rough-hewn Augie (Andrew Dice Clay), had two sons with him, and then they divorced; now Ginger is in a relationship with Chili (Bobby Cannavale), another blue-collar working stiff, and works in a supermarket while raising her two boys in a small-ish apartment.

It's a tough life, but not a bad one, until Jasmine's extremely needy presence adds a considerable amount of stress and tension. What's marvelous here is the maner in which the complicated ties between Jasmine and Ginger are revealed and then explored; Ginger's personality is delineated with wonderful touches of empathy.

What's awful here, though, is that Woody Allen's understanding of blue-collar life is firmly rooted in mid-20th century models. Thus, Ginger and Augie and Chili and Chili's pal Eddie (Max Casella) all talk like Brooklyn thugs -- or t'ugs, if you please -- and lack grace, manners, and intelligence, which is Allen's default method for portraying the 99%. Taken at face value, it's insulting and rather tone-deaf to the valid concerns of ordinary, working-class people.

Viewed as a stream-of-consciousness reaction to a rich, established, older man's fear that he might lose everything he has worked his entire life to attain, however, the film takes on a more illuminating meaning. As a writer, Allen's proclivity for working fast has exposed shortcomings in his recent scripts that were not so obvious in the past. He's still fully capable of dreaming up promising story ideas and crafting clever dialogue, but it's often felt as though he hasn't fully fleshed out his characters or worked out all the kinks in his narratives.

That tendency rears its ugly head once again in Blue Jasmine, which keeps it off the top shelf of his work. Still, as an imperfect, slightly out of focus snapshot of his own emotions, dreams, and nightmares, Blue Jasmine is his boldest, most provocative film of the past 20 years.

The film opens in New York and Los Angeles on Friday, July 26, and will expand further across the U.S. in the coming weeks. Visit the official site for more information.