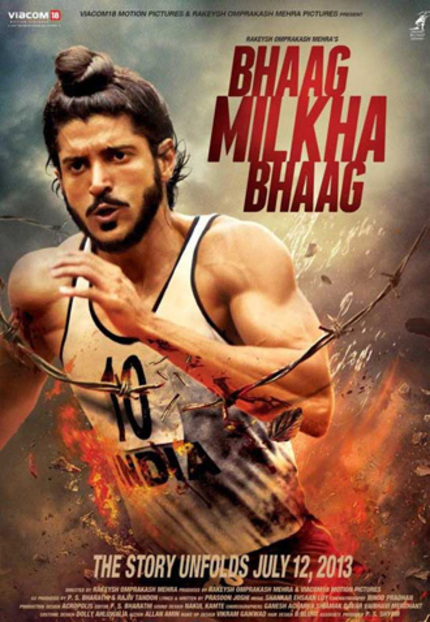 Every country has its sports heroes. For India, one of the greatest is Milkha Singh, The Flying Sikh. Singh was, for a time in the late '50s and early '60s, one of the fastest men in the world in the 400 meter race. He competed in two Olympics, heavily favored to win the event, and came home empty-handed both times. If you're not Indian, this is probably all you know, if anything at all, of Milkha Singh. Director Rakeysh Omprakash Mehra (Delhi 6, Rang De Basanti) and Farhan Akhtar (director of Don, Dil Chata Hai and star of Luck By Chance and Zindagi Na Milegi Dobara) bring Singh's story to life in this epic tale of one of India's greatest inspirational heroes.

Milkha Singh is a child of India in the '30s, which means that his life is divided into pre-Partition and post-Partition segments. His village in Punjab was on the border between what became India and Pakistan at the brutal ending of the British Raj, and the violent riots which claimed his parents' lives left a strong mark on the man Singh would become. More than just a story about an athlete, Bhaag Milkha Bhaag is a story of India in its most turbulent times. Not only did the Partition separate countries, it divided families, took what was a largely tolerant religious community and turned it on its head, and started a cold (and sometimes not so cold) war that lasts until this very day between India and Pakistan.

Bhaag Milkha Bhaag is an epic film, as the story of India in the 20th century is epic. At a touch over three hours, one could be forgiven for feeling that the film is a bit overindulgent, but really, there's very little fat on this story, and Mehra tells his story with decent, though not entirely spartan, restraint. Milkha Singh is a proud Indian, and a proud Sikh, and that pride colors his life as he attempts to bring glory to his nation and his family. From his youth in the refugee camps of the newborn Pakistan, to his travels around the world as India's most well-recognized athlete, Mehra and Akhtar leave no stone unturned in telling this story.

As one should probably expect, Bhaag Milkha Bhaag (which translates directly to Run, Milkha Run) is a more of a veneration of a bigger than life hero than a warts-and-all biography. This is actually fine in this case, in fact, with the exception of some oddly shoehorned romantic subplots, the story is very straightforward. Singh is a hard-working man, a man who has found his calling as an athlete, when he had no other calling in the military, and took it to its logical conclusion. If you are going to run, why not be the best?

The standout performance, and some might say the only one that really matters, is Farhan Akhtar's portrayal of Milkha Singh. Akhtar embodies Singh to an incredible extent, living in the man's shoes and training insanely to get into the shape needed to accurately portray a man for whom running was a way of life. Akhtar, whose family has deep roots in Bollywood's colorful past, takes his time and expresses a lot without words, using his actions to tell Singh's story. There is a remarkably small amount of dialogue coming from Singh in the film's massive runtime, and Akhtar, star of several major blockbusters and director of even more major blockbusters, shows remarkable restraint in his performance with very few exceptions. While it is for Akhtar that the audience will come, he has a few compatriots there to help him out who also put in quite satisfying performances.

The supporting cast for Bhaag Milkha Bhaag has several recognizable faces and even one bone fide movie star, but all are content to allow the story to evolve around them without crowding the camera. Sonam Kapoor (Saawariya, Delhi-6) plays Milkha's love interest before he goes off to the military. Her performance is surprisingly subdued, however, her plotline disappears rather abruptly (like all of the hints of romance) and left me questioning if it was really necessary at all other than to fulfill the audience's need for a live interest. Also of note are a personal favorite, Prakash Raj as an army commander with a hard-on for Singh along with Pavan Malhotra (Black Friday) as Gurudev Singh, Milkha's coach & trainer and Divya Dutta as his older sister (even though she's 4 years Akhtar's junior). None of these actors mug for the camera, but all are worthy of note as they support Akhtar quite well.

Bhaag Milkha Bhaag is not without it's minor issues. As I mentioned above, there is a love story between Singh and Biro (Kapoor) that seems to bloom and then disappears. The need for love interests in every film is extremely common among big Bollywood films, but in this case I think the film would've worked just fine without it. It does establish Singh as a roguish character brimming with charisma, but without a satisfactory wrap up, it feels like a loose end. the other major digression is a particularly daft interlude that takes place during the 1956 Melbourne Olympics, in which Singh falls for an Australian girl and ends up losing his race. It isn't the love story that irks, it's the goofy manner in which it is handled that throws me off. The goofball portrayal of white characters in Asian films is nothing new, but in this case, a song sequence in an Australian bar really stretches the bounds of credulity and feels wildly out of place in an otherwise reverent film.

Those are minor quibbles, however, in the grand scheme of things. Bhaag Milkha Bhaag is easily one of the best mainstream films to come out of Bollywood this year. 2013 has been rather flaccid in terms of big budget features of quality, but thankfully, this one lands firmly in that category. Sure, the film would play better with international audiences at a more modest running time, and without the awkward Australian song and dance, but then it wouldn't be Bollywood, would it?

Hi. This is Divya Tejuja , Head Eye D Communications - a film and celebrity PR firm from India. Wanted to touch based with J Hurtado. Request if someone could help with a contact. I'm accessible on eyedpr1@gmail.com.

the love story wasn't put in the flm just for fun. if the reviewer didn't know, its because of his first love that he went out and pursued his ambition (said by singh himself)