Benjamin Umstead
Editor, U.S.; Los Angeles, California (@filmbenjamin)
Tweet Post Submit
Now in its seventh year, the New York Japan Society's Japan Cuts has built up quite the reputation for being the premiere showcase for new cinematic works from Japan, if not just for the east coast cinephiles, but the entirety of American appreciators. Their programming is nothing short of eclectic, offering the wackier, more fun-fueled or transgressive works with their co-partner New York Asian Film Festival, while presenting a slew of more somber and realist works on the back end, which rarely disappoint.

Taking a glance at this year's program prompts one to raise an eyebrow perhaps even more so than usual, as the 2013 slate covers some pretty dark territory, and most of it does not fall into fantasy genres. Chalk that up to cinema being a mirror of the greater reality and one remembers how troubling and harrowing a time the Japanese people have had these past few years. Although one could make the argument that Japanese cinema has remained so vital and potent on the world stage merely because its never shied away from putting the absolute hard truths on screen in riveting and engaging ways.

To give you a taste of what you can expect during the festival, which starts tonight and runs to the 21st, Peter Gutierrez, Dustin Chang, myself and guest contributor Steve Kopian from the undoubtedly cool Unseen Films, weigh in on a handful of this year's selection -- enjoy, and be sure to keep an eye out for full reviews from Japan Cuts 2013 in the coming days.

While not as mesmerizing as his 2009 return to cinema The Blood Of Rebirth or 2011's Monsters Club Toyoda Toshiaki's latest should please fans for its slow burning philosophical nature and immeasurable amount of birth/death imagery.

When Master Rui, head of the Life Is Beautiful church is involved in a car accident which causes the death of a motorcyclist, and puts the young woman he was with into a coma, Rui's mother and sister (the real power players) hire three bodyguards to protect their kin, as they're now concerned that media exposure surrounding his true vapid playboy nature will bring out death threats for the nearly ineffectual if charismatic head of their operation.

The majority of the film plays out at the family's seaside estate, which resembles something between a Mormon cathedral and a Palm Springs resort -- or maybe those future domiciles from Woody Allen's Sleeper. Everything is immaculate and sterile, as if no one lives there at all. Lei resides in a room which main focal point is an altar of booze, bookended by two garish nightclub dart boards.

Lei is haunted by the night leading up to the accident; trapped by the intensity of the girl he was with -- the sister of a church member who committed suicide.

Any satisfaction the film grants comes in the luminous experiences of birth and death. For some these bring joy and a second chance, while for other it brings a fat paycheck, and for others yet: peace. -- Ben Umstead 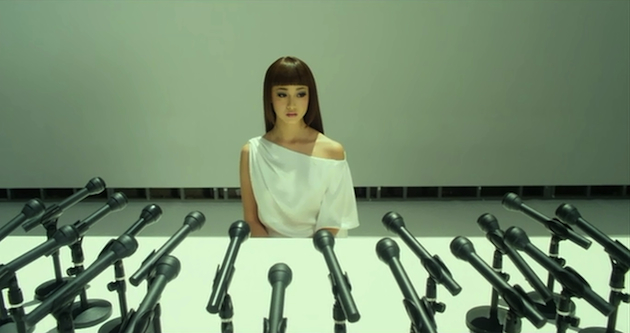 Sawajiri Erika stars as Lilico, a superstar singer/actress/model, who is loved for her stunningly good looks. What very few people know is that the looks are entirely man made and require constant maintenance. But one's body can only take so much before it breaks down.

The thought of what David Cronenberg would have done with this in his heyday was something that raced through my head several times while watching this film. Actually what I really was thinking was this would have been better with someone with less a visual style and more a grasp of storytelling.

Director Ninagawa Mika is a fashion photographer by trade and every image is picture perfect as if it were ripped from the pages of Vogue. But to me there isn't much beyond that. To me the target of Japanese culture and it's throwing up so called Idols with frightening regularity is much too easy a bullseye to hit. I'm not sure if the source manga is the same way, but I would like to hope not. Because the visuals are so slick the film becomes a shallow film about shallow people.

How you react to the film will depend upon how you react to Lilco.  If you can muster any sympathy this will be horrifying and in some ways a sad film about a person self destructing. If you can't this is a form over content film that will make you squirm in your seat. -- Steve Kopian (Originally published in a longer form at Unseen Films) 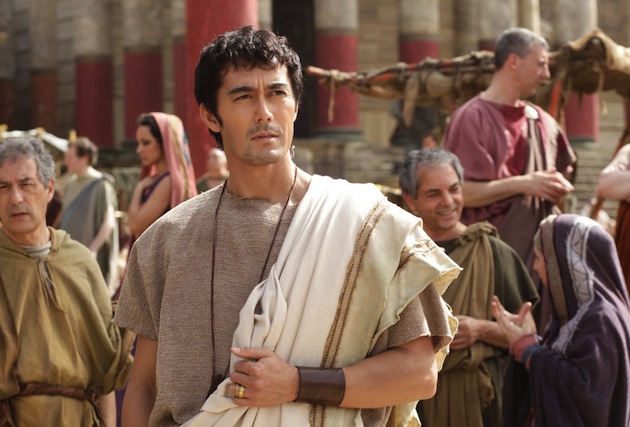 The fact that a sequel is underway to this adaptation of a mega-popular manga title helps one forgive the relative weakness of its ending: it coasts to a soft climax that feels more like a pause than the end punctuation that your heart has been waiting for. The good news is that the basic premise, not to mention the appealing leads and winning comedic touch of director Takeuchi Hideki, makes you want a sequel to be released, and the sooner, the better.

Indeed, for most of its running time Thermae Romae manages—and rather effortlessly at that—to be one of the more charming time-travel flicks in recent memory… and that’s without subscribing to the subgenre’s hoarier tropes.

So instead of wasting time explaining why a Roman bath designer (Abe Hiroshi, a funny Kirk Douglas-type) and a present-day aspiring manga-ka (the almost too-cute Ueto Aya) are able to transport to each other’s respective settings, the script focuses on relationships: at first broadly between Roman and Japanese culture and then, as the romcom elements inevitably flower, between our two stars. Yet while the third act aims for both historic and dramatic import and falls a bit short in both departments (especially with its cast-of-dozens battle scenes), the delightful giddiness of the whole enterprise lingers, provoking a smiling shrug in response. In short, this is perfect light movie fare for an oppressive summer in New York. -- Peter Gutierrez 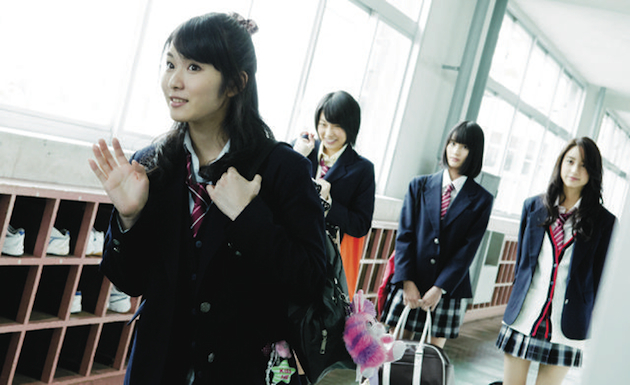 One day Kirishima, big man on campus, quits the volleyball team and walks away from school. His absence sends those around him and much of the school into chaos.

Winning best picture at the recent Japanese Oscars, Kirishima is an existential examination of society and the classes we put ourselves in and are forced upon us. Kirishima, like Godot, is never seen but his presence and importance is felt through out the film. Some people are forced to change their position in life, others no longer know how to define themselves and others just don't care.

A good solid film, it didn't completely click with me. Part of it is I suspect that some of the angst of Japanese school life simply didn't hit me. I'm several years past high school and I see some of the things that the kids are worrying about as ultimately hollow (okay yes, isn't most of all our lives equally hollow about different things? But I digress). And I think part of it is that the film is slightly too mannered for me. The film is clearly striving to be about something greater and at times it seems to force the point. -- Steve Kopian (Originally published in a longer form at Unseen Films) 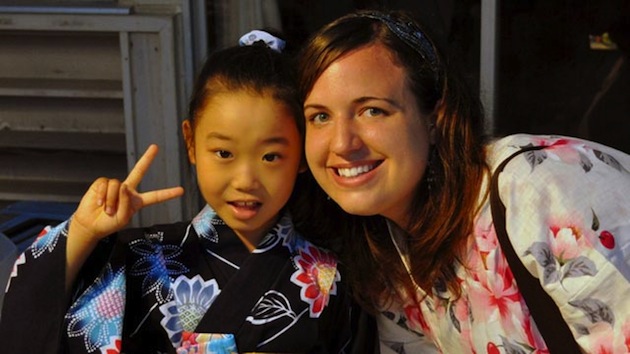 Taylor Anderson, a 24 year old American JET (Japan Exchange and Teaching) participant who died after the Great East Japan Earthquake and Tsunami of 2011, in Ishinomaki, Miyagi, is lovingly remembered by people who loved her in this documentary -- and there were many. The doc shows that her zeal for everything Japan was formed at an early age and she grew up to be a sunny, fun loving person who always knew she'd go live in Japan some day.

Regge Life's direction is a bit too conventional and sentimental at times. But seeing the footage of the wall of black water sweeping rapidly in through the cities and the aftermath of destruction really puts things in perspective and makes you think about the human cost. Live Your Dream celebrates a life well lived and honors the spirits of those who perished in that fateful event. -- Dustin Chang 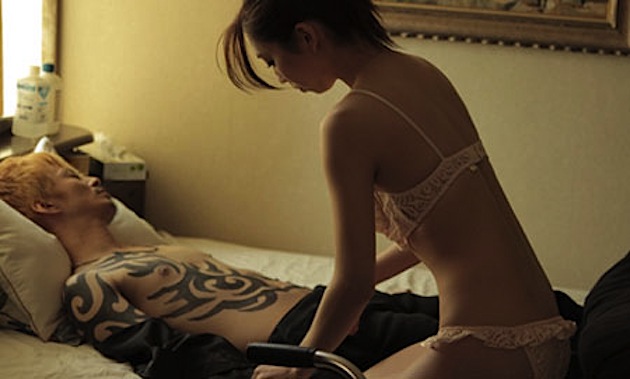 You wouldn’t think 68 minutes is enough time to see two separate movies, but that’s what you get with Toda Yukihiro’s feature, which feels alternately like an overstretched short and a really condensed cable TV mini-series. “Everybody has something missing,” announces our sex-worker-with-a-heart-of-gold protagonist, thus underscoring a point about disability and humanity that had heretofore been handled implicitly.

And that’s pretty much the pattern here: the first half of There is Light is both disciplined and naturalistic, recalling Murderball, The Girlfriend Experience, and (inevitably) The Sessions in its episodic presentation of an escort agency that wants nothing to do with the able-bodied. It’s often disarming, presupposing the audience’s intelligence and delighting us with its well-observed details. But then everything veers. Awkward staging and editing surface, and, worse still, the insertion of cutesy pop songs in what had been an utterly score-less drama complement a trite climax that, believe it or not, invokes the rising sun as an image of hope amidst despair. -- Peter Gutierrez

Kobayashi Masahiro's film is that rare one that puts it all out there, daring you not to feel something. And to feel it profoundly. The opening two shots, each about ten minutes long, might seem to belie this: the camera’s not just static, but austerely static, pointing to an old school arthouse aesthetic that often signals self-consciousness and a “cinema studies”-style distancing from the topic at hand. The rest of Japan’s Tragedy continues in this long-take vein, complementing its sobriety by foregoing a musical score and opting for a straightforward black-and-white palette that doesn’t seem to care about “deep” shadows or “pretty” light; thus it becomes clear that Kobayashi doesn’t want you to admire his filmmaking, or even like it, really, but to connect with the uncompromisingly human story almost as if he weren’t there.

Kitamura Kazuki, the mustache-twirling villain in Thermae Romae, is superb here in a role that, at first blush, is just as unsympathetic. Likewise, the character played by the legendary Nakadai Tatsuya also initially seems “unlikeable.” However, as the script masterfully reveals backstory through flashbacks that actually lack any real flash, the true dimensions of the “tragedy” telegraphed by the title start to emerge. So forget about pigeonholing this as a March 11 message movie, and please do yourself a favor and skip any detailed plot synopses you may come across. Instead, go in raw—and come out rawer. Feel the power of authentic tragedy in a way that’s very hard to experience these days. -- Peter Gutierrez

Do you feel this content is inappropriate or infringes upon your rights? Click here to report it, or see our DMCA policy.
I'M FLASH!Japan CutsJapan's TragedyJapanese filmMasahiro KobayashiTatsuya NakadaiToshiaki Toyoda