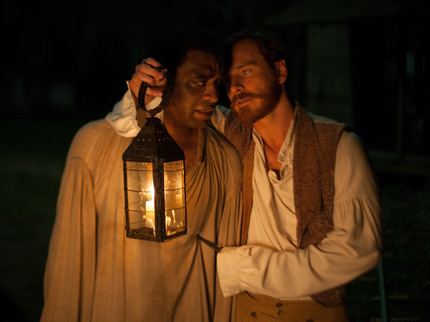 UK director Steve McQueen pretty much blew filmgoers away in 2008 with his intense political thriller Hunger, which examined the life of Bobby Sands and the Irish Troubles of the late 20th century. Then he turned that same intense eye to the politics of sex in contemporary New York with Shame in 2011. McQueen's films are marked by his consistent use of shots of incredibly long duration, ones that force the spectator to watch a face, or two people in conversation, until it is unbearable.

While not strictly art-house cinema, these films definitely showed the mark of their director's strong eye for detail and presented a searing look into the human soul. Perhaps it is natural that he should examine another intense and sensitive political topic for his next film; and although it's unusual for an outsider to look at the history of slavery in America, the first trailer for 12 Years a Slave shows a well-researched history and story. It's based on a true story of a free man, Solomon Northup (played by one of my favourite actors, Chiwetel Ejiofor), who is kidnapped and sold into slavery in the deep south.

The trailer gives the outline of the narrative, and shows the main actors: Ejiofor, Fassbender (a McQueen regular, this time as a pretty nasty slave owner), Alfre Woodard, Paul Giamatti, Paul Dano, Benedict Cumberbatch, and Brad Pitt (well, he's a bit of anomaly in my opinion, but it could work). The trailer doesn't show much of McQueen's signature camera work, but that might be marketing to sell it to a wider audience. Hunger covered political territory as controversial and divisive as American slavery, so McQueen is certainly up to the challenge, and screenwriter John Ridley also wrote Red Tails and Three Kings, so he is as well.

The film is set for release in the US in October.