Review: THE STROLLER STRATEGY Is a Bad Idea Badly Executed 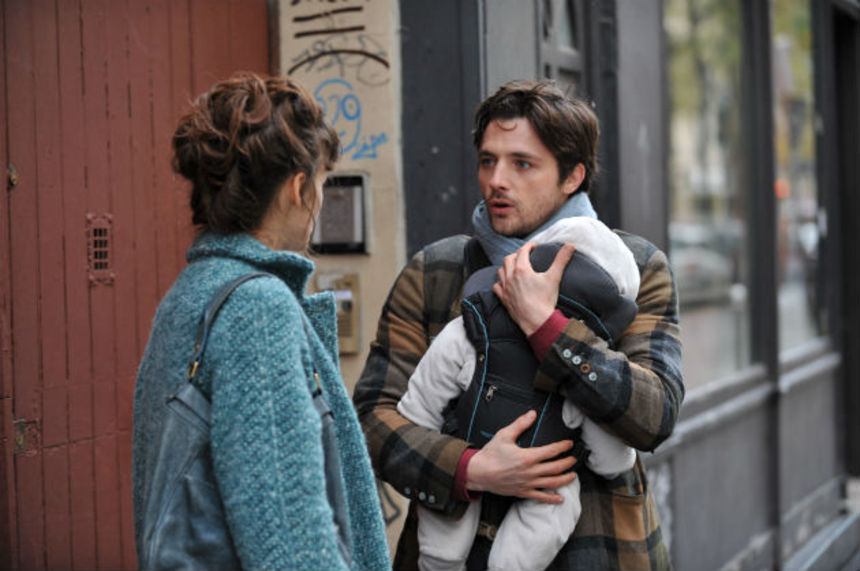 France has a thriving film industry, the biggest in Europe, with more than 250 productions a year. Of those, only a few dozen make their way into U.S. cinemas, usually because they're good, or have notable names attached, or will appeal to American art-house sensibilities, or some combination of the three. And then there are outliers like The Stroller Strategy (La stratégie de la poussette), a lousy, middle-brow situational comedy with no stars, no prestige, and almost no laughs.

How did you get here, The Stroller Strategy? What mixture of luck and poor decision-making brought you to our shores? How many worthier French products were overlooked so that you and your unbelievable sitcom plot and psychotic protagonist could come here and pollute our cinemas? Begone with you!

The feature debut by writer-director Clement Michel actually begins well enough, with a cute series of scenes, each set exactly a year apart, establishing the relationship between twentysomething freelance artist Thomas Platz (Raphael Personnaz) and the woman of his dreams, Marie (Charlotte Lebon). They are in love, but Marie ultimately leaves Thomas because she wants to have a baby and he's noncommittal about it. She breaks up with him in the hallway outside their apartment, unaware that there's a surprise birthday party waiting for her inside. We start to worry that maybe we are watching a big-screen sitcom.

Those concerns soon prove justified. A year later, Thomas still pines for Marie. His wacky best friend, Paul (Jerome Commandeur), urges him to get over it, and suggests adopting his pickup strategy of carrying a baby's carseat in public to make women think he's a single dad. Thomas rejects this idea for being insane and stupid. But later, as he's walking up the stairs to his apartment, his neighbor collapses, drops her infant son over the banister, and Thomas catches him one floor below. The neighbor, young unmarried Melanie (Camelia Jordana), is ill and hospitalized. And for some reason Thomas -- virtually a stranger -- must take care of the baby until she recovers.

Now, I don't know a lot about the French healthcare system (except that it's SOCIALISM!!!), but it seems unlikely that it is standard procedure when a single mother gets sick for the hospital to just hand her baby over to her downstairs neighbor for safekeeping, especially when the downstairs neighbor has neither the inclination nor the ability to care for an infant. Surely there's a system in place for situations like this. Isn't that the whole point of SOCIALISM!!!?

So Thomas has this baby now, and there's the usual shtick of not knowing how to change a diaper, yada yada. (We're spared the gag where the kid pees on him. Be grateful for small miracles.) This is followed by Thomas' stunning decision to "accidentally" bump into Marie and pretend the baby is his. According to his foolproof plan, she'll see that he CAN be a father, change her mind about him, and take him back.

Yeah. It's rough. Even by the low standards of brainless romantic comedies, this premise is excruciating. And it only gets worse. How? Well, Thomas' dumb plan WORKS, for one thing. Marie starts to reconsider him. She runs a baby-and-mommy activity center, and Thomas brings the kid there to show how involved he is in "his" son's life. (His story is that he met the baby's mother immediately after he and Marie broke up, and that they split up just after the baby was born.)

But the movie really goes off the rails at the end. After just five days of caring for the baby, Thomas becomes dangerously possessive. He acts weird when Melanie gets out of the hospital and takes the baby home, and lashes out at Paul when he quite reasonably suggests that Thomas tell Marie the truth about this baby she thinks he has. Melanie plans to move back to her parents' house, and when she comes by Thomas' apartment to say goodbye, she falls asleep on his couch (what?) and Thomas takes the baby to an event at Marie's place (WHAT??) -- one final opportunity to use the diaper-clad prop.

If this ludicrous story were presented as high-concept farce, it could conceivably work. But Michel presents it as a dry, deadpan comedy about supposedly normal people. Aesthetically, it looks and feels like a cheap TV sitcom, with bright, washed-out lighting and bland colors. It isn't funny, it isn't sweet, and it isn't worth your time.

The Stroller Strategy is now playing in limited theatrical release in New York. It opens in Los Angeles on Friday, June 28. Visit the official site for more information.