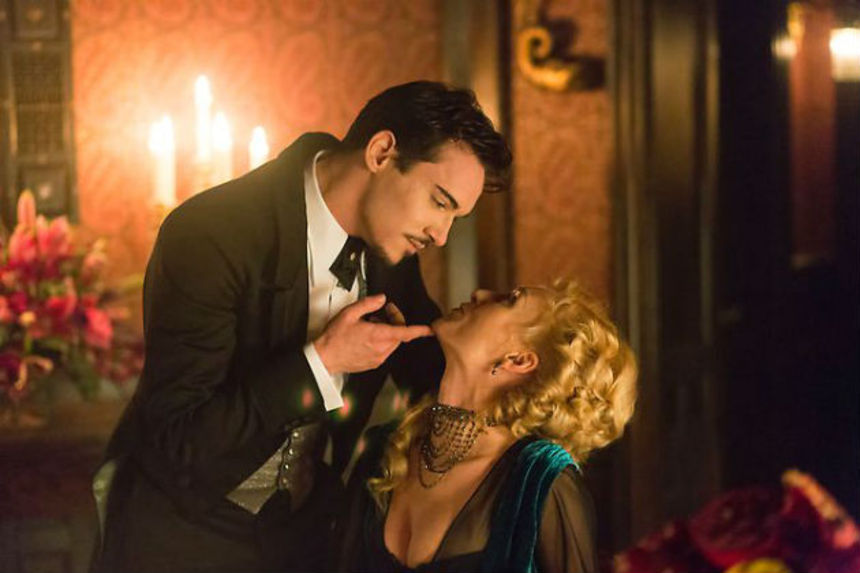 With the fate of Hannibal still up in the air -- or, at least, not yet revealed -- U.S. broadcast network NBC announced its fall schedule, which includes a new version of Dracula from the producers of Downton Abbey (?!), and starring Jonathan Rhys Meyers (The Tudors).

The series is set to air on Friday nights, following Grimm, an amusing and energetic genre show that has done quite well in its second season. From the trailer that NBC has released for Dracula, it looks like a good match for those who still watch TV shows on the night they're first broadcast.

Though the Downton Abbey pedigree sounds odd, it makes sense, considering the Victoria Era setting, the costumes, production design, and so forth, which all looks quite rich and detailed. Rhys Meyers starred for four seasons as King Henry VIII in Showtime's The Tudors, so we know he can easily command a series lead.

The larger issue will be, What makes yet one more version of Dracula compelling for the viewer? Here is NBC's official synopsis:


It's the late 19th century, and the mysterious Dracula has arrived in London, posing as an American entrepreneur who wants to bring modern science to Victorian society. He's especially interested in the new technology of electricity, which promises to brighten the night - useful for someone who avoids the sun. But he has another reason for his travels: he hopes to take revenge on those who cursed him with immortality centuries earlier. Everything seems to be going according to plan... until he becomes infatuated with a woman who appears to be a reincarnation of his dead wife.

Thomas Kretschmann has been cast as Abraham Van Helsing, and he usually brings vim and vigor to his roles, so, between him and Rhys Meyers, there's a glimmer of hope that the series will turn into something worth watching.

Do you feel this content is inappropriate or infringes upon your rights? Click here to report it, or see our DMCA policy.
Downton AbbeyDraculaJonathan Rhys MeyersCole HaddonJessica De GouwThomas KretschmannVictoria SmurfitDramaHorrorRomance