Review: SHOOTOUT AT WADALA Is All Slo-Mo Aviators, Mustaches, And Blood. 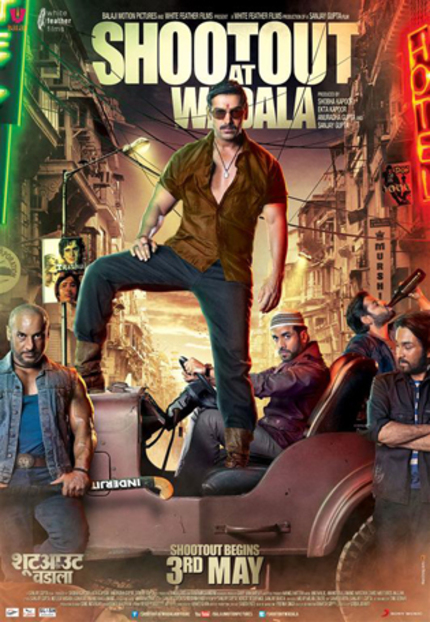 It may have happened around the time of the second item number, I'm not quite sure. We'd just come back from the intermission when, seemingly out of nowhere, Priyanka Chopra appeared in an LED-lit bodysuit shaking her tail feathers like there was no tomorrow. The song was titled Babli Baadmash, and if you weren't a Bollywood fan before seeing Shootout at Wadala, you might be a bit perplexed as to what was going on. Leading into Babli Baadmash we'd already seen numerous assassinations, bloody prison shankings, and all manner of other ultraviolence on screen, so this peppy little number might seem out of place. However, it is the embrace of Bollywood convention mixed with the appreciation for World Cinema and the modern gangster mythos that makes director Sanjay Gupta's latest film such an intriguing beast.

As is typical with many Bollywood films, attempting a plot synopsis could easily take up 1,000 words on its own. Let me break it down as simply as I can: Boy meets girl, boy is framed for murder, boy goes to prison and decides to become the king of Bombay's underworld, boy splatters brains and blood all over town before reconnecting with girl, boy scares girl, more blood and brains, and finally, a crazy shootout. Obviously, at two-and-a-half hours, there's a lot that goes on in between those skeletal moments, but most of them adhere to the splattering of blood and brains portion. It isn't what the film is about, it's how it goes about it that makes Shootout at Wadala such an archetypal modern Bollywood crime story.

Over the last decade, filmmakers like Ram Gopal Varma (Company) and Anurag Kashyap (Gangs of Wasseypur) have brought the underworld crime saga into the 21st century and more or less on a par with the rest of the world in terms of quality of Cinema. Meanwhile, mainstream Bollywood filmmakers have been attempting, with varying degrees of success, to recreate that same degree of realism while still adhering to the Bollywood aesthetic, but few have been really successful. Shootout at Wadala may be the closest we've yet come to the perfect mix, but it still has its sticking points.

The film is bloody and more often than not the violence is realistic. Sure, we still get the stock body blow foley effects and the occasional physics-defying stunt in the name of masala, but overall the film doesn't take too many liberties in those regards. The points at which the Bollywood newbie will likely tilt their heads in confusion/bemusement are the item numbers inserted into this otherwise very gritty film. This is both what makes it so completely Indian and so completely foreign at the same time. The ability of Indian film audiences to adjust to tonal shifts at the drop of a hat is something that has been bred into them since time immemorial, and it definitely helps keep the flow here if you can do the same.

In his attempt to create an complete entertainer with some punch, Gupta has included no less than three major item numbers. The first, Laila, takes place in a brothel and features Indo-Canadian porn star Sunny Leone (Jism 2) in her first item number. Leone acquits herself admirably, despite not really being a dancer nor a native Hindi speaker. Let's just say that she dances like a stripper and seems most at ease when grinding. The second is the above mentioned Babli Baadmash featuring Priyanka Chopra in her first item number. This is probably the most jarring tonal shift in the film, as it comes right after the intermission and lands on screen completely without context, apart from the fact that it is designed to show that John Abraham's Manya Surve is a badass.
The final item number is Aala Re Aala featuring Sophie Choudry, which sees John Abraham dancing in a saloon in a comically tiny cowboy hat. These three numbers are all upbeat and presented without a trace of irony, which will definitely jar for non-Indian audiences, but for those of us with some experience, they are actually not too bad. The film works just as well without them, though, and if another version of the Shootout at Wadala appeared with all of the songs removed, I'd watch it all over again.

One of the reasons that the film works so well is an amazing cast that continued to shock me with its depth at every moment. The film's hero is John Abraham as underworld upstart Manya Surve, the "boy" of the abbreviated plot synopsis, but this cast is overflowing with performers who all leave every bit of their talent on the screen. Actors like Manoj Bajpayee (Gangs of Wasseypur, Chittagong), Kangna Ranaut (Once Upon a Time in Mumbai), Jackie Schroff, and Sonu Sood (Dabangg, Buddah Hoga Tera Baap) populate much of the film's run time and do it handsomely, with Sood in particular brooding all over the damned place. However, it was the performances of Anil Kapoor as Police Inspector Ishaque Bagwan and Tusshar Kapoor as Manya's right hand man Munir that really had me going.

These two performers, one a thirty year veteran of the film industry (Anil Kapoor) and one a relative newcomer (Tusshar Kapoor) both deliver riveting performances with the material they are given. Anil Kapoor comes from a different time when Bollywood heroes were supposed to have unabashed swagger and he plays every role as if it's his goddamned movie, no matter whose name is on the marquee. Tusshar Kapoor, on the other hand, plays his part as Munir with relative understatement, but never loses a chance to make an impression. This is a clash of the legacy (Anil) and future (Tusshar) of Bollywood meeting that we may not see for much longer as the films make that hard turn toward realism. Here it works, and helps to maintain that solid masala feeling.

Even without mentioning the plot, there is a lot to enjoy about Shootout at Wadala, Sanjay Gupta's Zack Snyder-like love of slow motion notwithstanding. The action is solid, the performances from an incredibly talented and deep cast are wonderful, and the music is damn catchy, even when it feels a bit out of place. This is the Bollywood I adore, the "I don't give a shit if you don't think a song goes here, I'm fucking putting one here" Bollywood at which most foreigners balk. Shootout at Wadala is the complete package and I wouldn't be surprised if, after another viewing or three, this film ends up in my all-India Top Ten come December. I'll definitely be rewatching this film, and I think you'll get a kick out of it too.

More about Shootout at Wadala