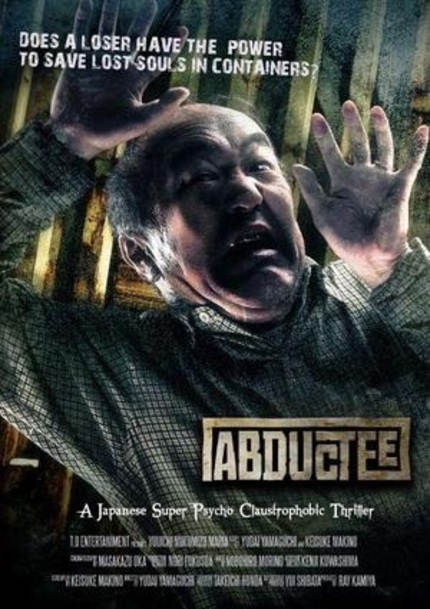 Japanese director Yamaguchi Yudai shows signs of creative growth and maturity in this taut, well-directed chamber piece that takes place entirely within the confines of a shipping container. When middle-aged security guard Chiba awakes to find himself bound and gagged inside a large metal box, he immediately assumes the debt collectors have lost their patience with him. But as time goes on, he realises that something else entirely is happening, and that their are other captives in neighbouring containers - all with numbers tattooed on their arms, all heading to the same unknown destination.

As the film opens, and we first see Chiba, hands and feet bound, plastic bag over his head, there is an immediate sense of fear, not so much for the character's fate - at this stage we know nothing about him - but that the next 90 minutes are going to be a grueling ordeal for the audience. However, this proves not to be the case. While Yamaguchi keeps the action confined, this is not an exercise in prolonged claustrophobia or torture, and the film flits merrily from one genre to another as Chiba learns more about his situation.

While Chiba is the only character we see onscreen, we hear a number of others - fellow abductees in neighbouring containers - as well as other voices via his cellphone. This makes things slightly easier for actor Yoichi Nukumizu, as he is given more to interact with than just the metal walls, and has the means to evolve his performance beyond concerned looks and wails for help.

Yamaguchi also keeps things interesting by having the container be almost constantly on the move. At first, it is on the back of a truck, then later is moved onto a ship, and then back to dry land. All of this is accomplished solely through the use of sound and camera movement, but the result is extremely effective in instilling Chiba's plight with a sense of urgency and allowing his cellphone to move in and out of service areas.

Special mention should be given to Masakazu Oka's cinematography, that always manages to find new and exciting ways to shoot the inside of a tin can, while Nobuhiko Morino's dream-like electro score is another highlight of the film. Abductee will likely draw comparisons to films like Rodrigo Cortes' Buried or Vincenzo Natali's Cube both of which operate in similarly confined spaces, and this film deserves to be praised just as highly for its innovation and sense of dramatic urgency.

Given Yamaguchi's numerous collaborations with the Sushi Typhoon stable, which has yielded films such as Meatball Machine, Yakuza Weapon and Deadball, Abductee is something of a surprise and shows a degree of restraint and nuance that has been missing from his output thus far. That is not to say that the film is perfect. The tonal shifts, while coherent, might not always work for some viewers, while the ending could also prove too oblique.

But Abductee should nevertheless be applauded for confirming that Yamaguchi still has ambition, and continues to challenge himself as a filmmaker. Even with such modest resources at his disposal, he shows here that he is more than capable of delivering something genuinely interesting and engaging on such a small canvas.