Tribeca 2013 Review: Inside the Mind of MICHAEL H. PROFESSION: DIRECTOR 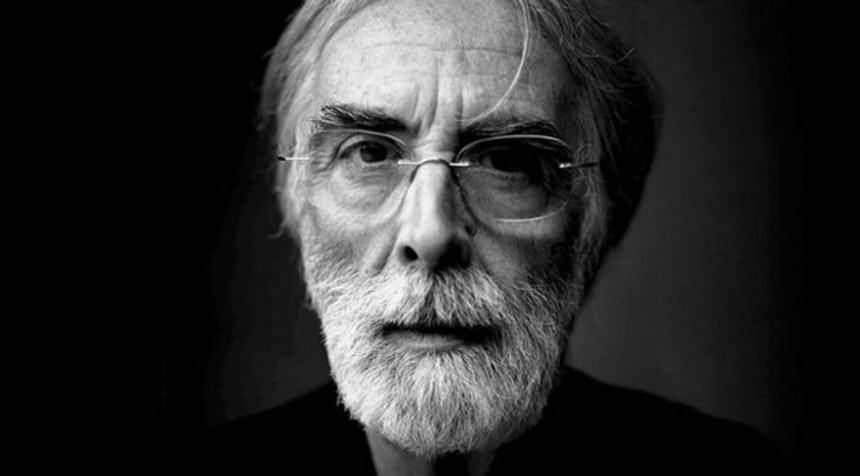 You think you know Michael Haneke? Director of such uplifting films as The Piano Teacher, Cache, and Amour? Look at that Austrian death-glower. It shrivels the soul. He's got to be one of the most humorless individuals on the planet, right?

Wrong. As depicted in Yves Montmayeur's Michael H. Profession: Director, the man can be downright jocular, and his sets are a playground of puppy dogs and rainbows. At least for him they are. According to one crew member, they're a nightmare for everyone else. Haneke might not be the curmudgeon most people expect, but he can vacillate between Falstaffian joie de vivre and exacting auteur from one take to the next.

This is the kind of candid insight afforded the viewer throughout. Montmayeur has shot numerous behind-the-scenes features for Haneke, footage from which makes up a good portion of the doc's 90 minute runtime. After a harrowing clip from Benny's Video to set the mood, the film focuses on the Oscar-winning Amour and works its way through Haneke's oeuvre in reverse chronological order (the Funny Games remake being the conspicuous omission). It's an interesting structure, one you would expect to end with a moment of contrast, illustrating his growth as a director. But Haneke's artistic trajectory is more of a straight line. If anything the film serves to highlight how consistent a talent he is.

These moments are supplemented with more recent interviews in which Haneke openly discusses his creative process, if not the actual personal meaning behind his work. (Seeing him brusquely refuse to answer certain questions is almost endearing.) There are also interviews with many of his collaborators, none of whom sugarcoat their experience with the director. In one scene, Emmaneulle Riva, who became the oldest ever Best Actress Oscar nominee for her role in Haneke's Amour, describes how she was so infuriated with the director she wanted to quit. Fortunately she didn't, and she acknowledges the end result was worth the distress.

So yeah, this isn't a fluff piece. Even when Haneke is feeding us the information he wants us to have, that in itself is very revealing. In one particularly amusing anecdote, he talks about how he was courted by Hollywood after winning his first Palme d'Or (for The White Ribbon, 2009). He says the script he was offered was excrement on paper, and he had no idea why he was even considered. He seems almost amused by it. (He makes no mention of the Funny Games remake while discussing his dalliance with Hollywood, which begs the question: Why DID he make that movie?) It's moments like these that make you feel this is an actual person you are getting to know.

Michael H. Profession: Director presents a complex portrait of one of the most renowned international directors working today. Rarely are we given this kind of access to a filmmaker who doesn't have a shiny product to sell. And rarely is it accompanied by such a wealth of archival material. Auteurs are notoriously private (at least that's the stereotype).

But Montmayeur doesn't take this material and give us mere biography; he has crafted a narrative out of Haneke the artist. Montmayeur knows when to step back and let the artist speak, and the artist knows when to let the art speak for itself. The result is an engrossing discussion that the audience is invited to take part in. And don't worry about saying the wrong thing: Haneke may be able to pierce you with his gaze, but he won't be able to yell at you through the screen.

Joshua Chaplinsky is the Managing Editor for LitReactor.com. He has also written for ChuckPalahniuk.net. He might still be a guitarist in the band SpeedSpeedSpeed, and is the poison pen behind thejamminjabber, although he's not so sure he should admit it.