Review: HEMLOCK GROVE S1E01-13 (Or, Blood, Intestines, and Vomit Instead of Story, Characters, and Horror) 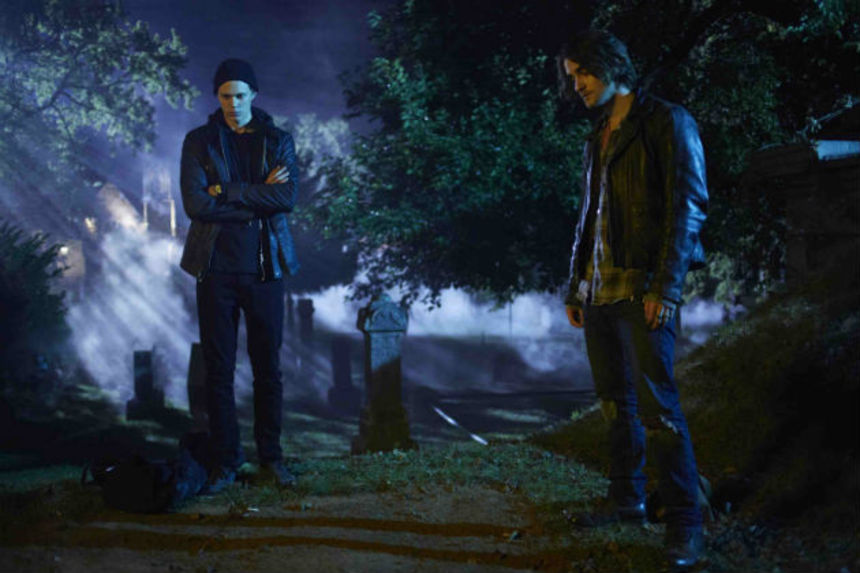 As with House of Cards, all 13 episodes of Hemlock Grove debuted on Netflix on the same day, empowering the viewer to watch the entire season in one go. In the case of Hemlock Grove, that's not a good thing, because its faults and limitations become more apparent when seen over a short period of time, rather than week by week over a period of months. There is no great mystery that demands a solution, and whatever suspense there might be is handled clumsily. The actors do their best, given that they are asked to deliver dialogue that is too often trite and cliched, and expected to embody characters who have personalities so slender that they disappear when turned sideways.

The series is based on a novel by Brian McGreevy, published last year, and is set in the fictional West Pennsylvania steel town Hemlock Grove. Make that "former" steel town, as the wealthy Godfrey family shut down the steel mill, throwing many local families out of work and inspiring resentment from those who remain. The Godfreys put all their money into a research and drug company, erecting an unaccountably tall high-rise facility to house the team. 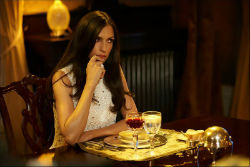 Olivia Godfrey (Famke Janssen) took over the family business after her husband died, but all she does is spend money and give commands to Dr. Johann Pryce (Joel de la Fuente), the lead medical researcher, who is unaccountably strong. Olivia spends the balance of her time conducting a most curious affair with Norman Godfrey (Dougray Scott), the brother of her late husband. Somehow they've kept the affair secret from everyone -- unless everyone is turning a blind eye? -- but it's a relationship that is defined almost entirely by their frequent sexual encounters. It's meant to be erotic, I suppose, yet it's a desultory experience for both of them.

Olivia's two children have their own problems. Roman (Bill Skarsgård) is unhappy and friendless, though he has no troubles drawing sexual interest from women because he's a good-looking 17-year-old bad boy who smokes, drinks, and drives a fast, expensive sports car. His sister Shelley (played by more than one actor) is a Frankenstein's Monster's type of creature; she is taller than everyone else and badly disfigured, but she's an empathetic sort who appreciates any kindness shown to her.

Norman is a psychiatrist, married to a woman with only an occasional, wan presence (Laurie Fortier), and devoted to his daughter Letha (Penelope Mitchell), who is best friends with her cousin Roman. Norman and Roman are both extremely protective of her, especially after she reveals that she became pregnant by an angel (?!).

Two gypsies roll into town to kick off the series. Peter Rumancek (Landon Liboiron) and his mother Lynda (Lili Taylor) have come to claim the rundown riverside trailer that belonged to a late relative. They resent "racist" remarks by others about their Gypsy heritage, though they immediately reinforce the stereotypes by shoplifting clothing, and Peter quickly embraces the idea that he might be a werewolf when it's suggested to him by curious younger teen neighbor Christina (Freya Tingley).

One night a high school cheerleader is viciously ripped in two, apparently by a wild animal. Sheriff Tom Sworn (Aaron Douglas) begins his investigation, and soon enough Dr. Clementine Chasseur (Kandyse McClure), a Fish and Wildlife officer, arrives to lend a hend. Just as quickly, it becomes clear that she has her own agenda.

As the series progresses, episode by episode, it gets bogged down in mediocrity. A creature out of the supernatural appears fairly early in the series, while others are hinted at, but the wheels of the investigation spin very slowly. In developing McGreevy's 300-page novel for television, McGreevy and producing/writing partner Lee Shipman fail to make the expansion of the material compelling. Even though there's an abundance of blood, intestines, and vomit, the dawdling storyline and familiar characters minimize the impact of the explicit violence. And though the series includes the requisite nudity, it too feels perfunctory.

Eli Roth serves as one of the executive producers and directed the first episode, which is no great shakes as far as horror and/or terror, and established the tone: workmanlike without much genuine enthusiasm for the largely blue-collar setting or the possibilities of a gothic horror series. Both are given lip service, but it's not a French kiss.

In its favor, I did not start screaming at the screen until Episode 13 -- a certain character's completely illogical and ill-explained action was one too many for me. A few performers rise above the material, in particular Aaron Douglas, who gives Sheriff Sworn far more dramatic heft than might be expected, and Penelope Mitchell, who invests an initially vapid character with increasingly raw emotions that transform Letha into a true heroine. Occasionally, intentionally funny moments do pop up, almost at random, most often seen in the silly interplay between the twin daughters (Eliana Jones and Emilia McCarthy) of Sheriff Sworn, who are best friends with Christina. Also, if you want to see bloody intestines, this is the series for you!

For the most part, Hemlock Grove is inoffensive and polite, featuring the least fear-inspiring werewolf that I've ever seen. It never rises above mediocrity before slipping into the more dire depths of inanity.

Hemlock Grove is available for streaming exclusively through Netflix.