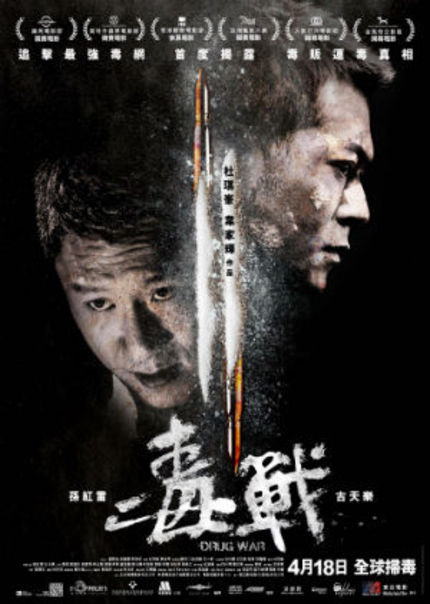 For a good time, go see Johnnie To's latest film Drug War, which features some masterfully made high-octane entertainment. Heroic cops battle villainous thugs and it all looks slick and stylish. Is it a classic? Probably not. Did I like it? Oh HELL yes!

This gives the drug squad a unique chance to set a trap for the secret gang led by legendary boss "Uncle Bill," and destroy his organization from within. But the plan is hardly fail-safe: the cops must pose as gangsters themselves to set up a deal big enough to lure the boss out. Worse still, the manufacturer must go with them as their only contact. Who can be trusted when the stakes get this high?

A long-time friend of the International Film Festival Rotterdam, Johnnie To visited Rotterdam five years ago with a whopping 18-film retrospective including Election, Election 2, and Exiled. While Drug War does not quite reach the high level of those three films (his holy trilogy, sort-of), it is slick, stylish and unapologetically crowd-pleasing.

Drug War takes place in several locations in mainland China, most notably the huge city of Tianjin, and it immediately gives the film a different flavor, setting it apart from the many Hong-Kong actioners. Johnnie To showed in Exiled, which took place in Macau, that he knows how to use locations to his advantage, and in this film it is no different.

But besides the locale, this is a pretty straightforward crime story, a pulp yarn even with a slightly silly finale. The police force consists of staunchly unflappable, incorruptible heroes, while the crooks are a decadent bunch of cartoonish eccentrics. The film mixes procedural realism with over-the-top characterization and this sometimes makes for an uneasy fit.

Thankfully, the two lead actors are really good. Mainland actor Sun Honglei may be best known as Zhang Ziyi's character's son in The Road Home, but here he makes a plausible and charismatic hard-as-nails police captain. Opposite him (or with him) is Hong Kong heartthrob Louis Koo, who plays the captured drug manufacturer. Much of the tension in this film comes from trying to determine what his character actually is. A crook eager for redemption? A cowardly rat just trying to save his own hide? Or a viper in human skin? Koo plays against type here and for most of the film his character is covered in disfiguring chemical burns, a decidedly different look for him.

In the end there is just too much good stuff in this film not to end up liking it. Johnnie To keeps even the longest conversations interesting to look at, and you can rest assured the action parts are solid too. While Drug War was shot under the far stricter Mainland Chinese rules with regards to on-screen violence, you will not really notice it.
There are only a few gun battles in this film but they are HUGE and ruthless. Will the police captain catch his prey? Will the cooperating crook escape the death penalty? In Johnnie To's hands, getting the answers to these stereotypical questions turns out to be far more thrilling than you'd think.

Not every last little thing may work in Johnnie To's new crime thriller, but the vast majority of it clicks together as a damn solid piece of action craftsmanship, anchored by two good leads. Seeing this film in the middle of a festival felt like drinking a strong cup of coffee when I REALLY needed one.

Therefore this film is much recommended!

Review originally published in slightly different form during the International Film Festival of Rotterdam in February 2013. Drug War opens April 18 in Hong Kong and Australia. Session times in Australia can be found at the following sites: