Review: AT ANY PRICE Explores The Changing World Of Modern Farmers 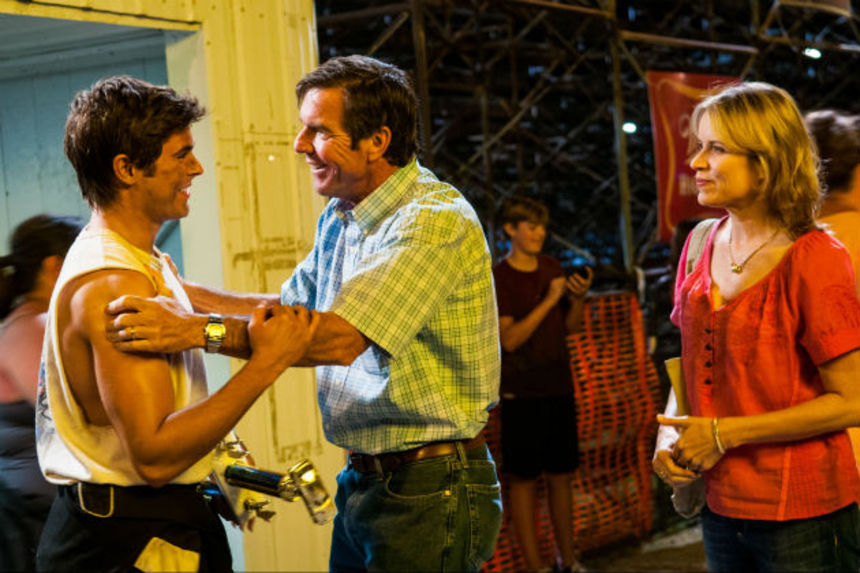 "It's gonna be a great harvest," says a farmer's wife near the end of At Any Price. She's referring to the corn crop, but what this resonant, well-acted drama has made clear by this point is that "you reap what you sow" applies to everything. For some of the characters, the harvest is going to be rough.

Set in central Iowa in the present day, when even a profession as old as farming is being changed by technology and modern business practices, At Any Price follows the exploits of Henry Whipple (Dennis Quaid), a hard-working striver trying to provide for his family. In addition to running the farm that his grandfather built, Henry works as a salesman for a seed company, supplying the needs of fellow farmers in the region, with his wife, Irene (Kim Dickens), handling the bookkeeping. Eagerly, at times desperately, the grinning Henry Whipple is constantly in salesman mode, always looking for a new angle, a new pitch, a new customer. He is Iowa's Willy Loman.

Furthering the Death of a Salesman parallels is the fact that Henry has two sons, one beloved and one a disappointment. The older one, Grant, is seeking adventure around the world at the moment, but it's expected he'll return soon and start learning the family business in earnest. (At one point, believing Grant's homecoming to be imminent, Henry literally rolls out a red carpet.) Henry scarcely even masks his disapproval of his other son, Dean (Zac Efron), a would-be NASCAR driver who hates living in a podunk farming community and wants to leave as soon as possible.

Henry is proud to be the top salesman in seven counties, but jealous of Jim Johnson (Clancy Brown), a fellow Liberty Seed representative who dominates 22 counties and is working to steal Henry's customers. It's all business, of course, nothing personal; Henry does the same to Jim when he can. But just look at the envy in Henry's eyes when he learns he's lost his standing in Decatur County. Adding fuel to the fire: Jim Johnson also has two sons, and they're both loyal, devoted heirs to the family business.

Dean hates his father and farming, and Henry is angry at Dean for refusing to follow in his footsteps, but those feelings are merely the byproduct of their different responses to a shared problem: they're both trapped and suffocating in a dead-end place. Farming is the only life Henry has ever known, and his own aged father (Red West) is still riding him about doing it right. This is it for him. He HAS to succeed at this, or his entire life is a failure. Dean, meanwhile, wants to emulate his brother and escape while he still can.

Plenty of their neighbors are likewise being slowly strangled by the lack of opportunities. The town hussy, Meredith (Heather Graham), didn't get while the getting was good, and now she's stuck here, having furtive affairs with married men and flirting with teenagers. She warns Dean's girlfriend, a rootless waif named Cadence (Maika Monroe), that she'd better move on to bigger and better things before it's too late for her too.

Well. This is certainly a grim portrait of rural life! That's the big picture, though. At its heart, the film is a small-scale story about two men learning how to fix their mistakes -- or, if that isn't possible, to live with them. Quaid's giant grin makes him perfect to play a salesman, but it's his skill as an actor -- and this is one of his best performances -- that makes it so impactful when the chickens come home to roost and Henry's smile and forced positivity fade away. Efron is likewise praiseworthy as a sullen second son who feels left behind. Whether Henry and Dean are doing the right thing, the wrong thing, or chickening out of doing the right thing, we feel for them, and relate to them.

That undercurrent of compassion isn't surprising, since the film was directed and co-written (with Hallie Elizabeth Newton) by Ramin Bahrani, a sensitive soul whose previous moves -- Chop Shop, Man Push Cart, and Goodbye, Solo -- expressed love and sympathy for mankind. At Any Price is more mainstream and plot-driven than those quiet art-house darlings, but Bahrani's affection for humanity remains intact, even if he fumbles certain storytelling points. (There's a lot of convenient eavesdropping going on here, and Irene arrives at more than one conclusion that is accurate but which she has no reason to suspect.)

Shot under gorgeous blue skies on wide open prairies, the film looks optimistic, even when circumstances are tough. What will become of the independent American farmer in this age of genetically modified seeds and corporate-owned farms? Inherent in any story about farming is the unspoken hope that no matter what happened this year, next year's crop could be better.

Review originally published during the Telluride Film Festival in September 2012. At Any Price is now playing in limited release in the U.S. Check the official site for more information.

More about At Any Price