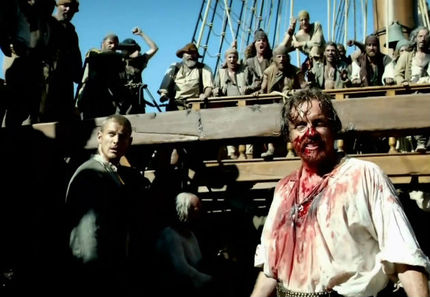 As a producer, Michael Bay has favored horror projects, so the teaser for pirate adventure Black Sails might be described as expanding his boundaries -- just a touch.

The TV series, given an eight-episode order by U.S. premium cable channel Starz, deserves an extra nudge up the interest meter because Neil Marshall directed the first episode.Black Sails is a prequel to Robert Louis Stevenson's Treasure Island, taking place 20 years before the events in the book. Toby Stephens stars as Captain Flint, with Mark Ryan (the voice of Bumblebee in Transformers), Luke Arnold as John Silver, Zach McGowan, and Hannah New among the cast.

Production began in South Africa in January, with the series set to debut next year. Starz owns international rights as well and is looking to roll out the series in as many territories as possible.