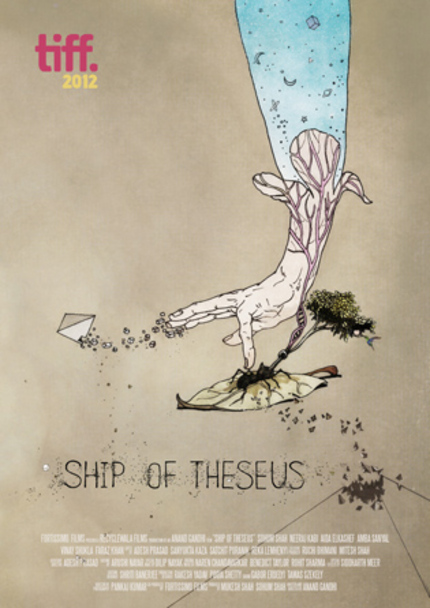 The ship of Theseus, also known as Theseus' paradox, is a paradox that raises the question of whether an object which has had all its component parts replaced remains fundamentally the same object. The paradox is most notably recorded by Plutarch in Life of Theseus from the late 1st century. Plutarch asked whether a ship which was restored by replacing all and every of its wooden parts, remained the same ship. -- Source: Wikipedia.

Above is the paradox of the ship of Theseus, the concept from which Anand Gandhi's film of the same name evolved. The essence of the paradox, which is the question of how much of an object can be replaced before it is considered a different object, is explored in three separate episodes over the course of a longish 148 minutes. As with any episodic film, some stories are better than others, however, all of the examples used by Gandhi are compelling in their dissection of the concept of identity and how humans so cherish their only real possession, the body they inhabit.

The three tales in Ship of Theseus all take place in contemporary India, though in different languages and involving some differing circumstances. It makes sense, in this case, to explore the three different stories apart from one another, since some hit me harder than others.
First is the story of Aaliya, a woman blinded by infection who finds a way to express herself through photography; her identity is upended by a transplant that gives her sight but takes something perhaps greater. We then follow an ascetic monk named Maitreya who has been diagnosed with terminal cirrhosis and is forced into complex ethical questions about remaining whole and satisfied with the body he's given, even as it slowly takes his life. The final story is that of Naveen, a hard-nosed kidney transplant recipient who becomes obsessed with the illegal organ trade in India and has to confront his own notions of ownership and wholeness when he confronts a wealthy man who may have inadvertently purchased a stolen kidney.

I'll be honest, the first segment of this film marked the first time I've ever felt compelled to take notes during a screening. Normally I try to go from a gut a bit more, but Aaliya's segment is just bursting with subtext, metaphor, and tiny details that mean everything; I didn't want to forget what made it so special. The idea of a blind photographer is one that, in theory, vexes me greatly as an affront to the very visual art that photography is. However, in this case, I understand Aaliya and her attempt to grasp for her own vision of the world that she can no longer see.

Aaliya selects moments from her life by feeling, sound, or smell. She photographs ideas, images from her mind that she attempts to capture in the best way she knows how. Her primary asset is her innocence, or you might call it ignorance, of the world spinning around her. She doesn't worry about composition, she doesn't worry about light or focus, she allows the camera to address her technical needs while she simply feels the images in the world around her.

Several of this segment's greatest moments come from Aaliya culling her images from a vast collection of shots. We rarely see her photographs, instead we understand them as she does, having them described to her by her live-in boyfriend. Rather than trust him to select the images he sees as best, she fights, sometimes rabidly, to maintain her "vision" of what her work should be. When he suggests that she keep a photo to which she's already said no, she becomes a brick wall through which no persuasion shall pass. She isn't frail, her disability is no handicap, and she insists on being every bit the temperamental artist that a sighted photographer would be.

When she is suddenly offered the opportunity to receive an eye transplant that may give her back the gift of sight, she takes advantage, as anyone in her situation would. However, she finds that once she has these new eyes, her photography becomes encumbered by this gift in a way that she wasn't expecting. Before she was happy to take images of feelings and emotions, now that she is able to see the mania in the world spinning around her, things are not so simple. Now she must deal with focus, with composition, with negotiating obstacles and acknowledgement of others in her sphere, whereas before she was more or less stealing images in a vacuum. The gift of sight has taken away the gift of anonymity, it has taken away her innocence, and most of all, it has taken the joy she felt from experiencing these images in her own mind.

It is at this point that the paradox becomes more clear. These eyes are not hers, so is she still herself? Granted, it is a bit of an obvious metaphor, but it still matters. How much of herself can she give away before her work becomes something that it wasn't before. Is this just an evolution of herself or is it something less positive? Aaliya never strikes me as a person who feels incomplete simply because she can't see. She is headstrong and determined to get what she wants. She is confident, even, in her disability, so when she jumps at the opportunity to make it go away, there is a feeling of a loss of identity even before it actually happens.

I could have watched the story of Aaliya unfold for two hours, so when it ended I was a bit sad to see it go. Her evolution as a person and as a character was remarkable and real, her dedication to herself and staying the person that she wanted to be was inspiring; even when that determination made her unattractive as a human, it made her compelling as a character. She seems to be a woman with far more strength than weakness. Even when her disability attempts to define her, she fights back and will not allow it. The invasion of foreign flesh into her body, the loss of wholeness, the substitution of parts that are not hers affects her. She is the Ship of Theseus.
The next two segments are less compelling, but Aaliya's story sets a high bar. The priest who decides to withdraw from life as his health deteriorates from a treatable disease philosophizes with a student of his as to the reasons why. It seems that the priest is satisfied with the life he has been given, that he understands that his body is merely a vessel, and when the vessel is weakened it is not best to patch it, as be believes medical treatment would, but to simply acquire a new vessel. Contrary to the idea of ownership of the body, Maitreya treats his body as borrowed for the time being, and there's no use in attempting to put a patch on it; he simply intends to allow himself to wear out naturally.

The way I saw this segment connect back to the Theseus concept was that the priest has no interest in becoming something that he's not. In his case, taking medicine to treat his ailments would mean that he didn't trust his own body to work on its own, which would not be his karma. This segment was painful to watch. The people Maitreya has gathered around him have mixed feelings about his decision to withdraw from life. Some respect it, others fight with him over his decision not to fight. As a viewer, I felt the same urge, but I also respected the idea behind it. The imagery in the segment was rather subdued, as great visual flourish wouldn't really have suited the somber tone. Shadows and natural lighting dominate the screen as we watch him flicker in and out of consciousness and watch his body decay with the light of his soul still trying to escape from his eyes. This is a beautiful piece, and in any other triptych, it'd be difficult to beat, but here it comes in second place.
The final segment of the film follows a recent kidney transplant recipient after he learns of a scandal involving stolen organs being offered up to the highest bidders, often hospitals. Naveen's story plays a bit more like a soap opera crossed with a thriller. He goes on a crusade to curb the black organ trade in India, which thrives as richly as any other black market in the country, by tracking down wealthy organ recipients who may have jumped the queue for their procedures. While his goals are noble, his methods are brash and his attitude places blame on the wrong people. He blames the people purchasing the organs rather than the people selling them.

There is a moment in which Naveen confronts a person he suspects of having received a black market organ from a man who ultimately died from his involuntary donation. When the man, gobsmacked by the accusation and realization that it may very well be true, asks what he can do to atone, Naveen responds that the only real restitution is to return the organ. Clearly, he takes the more literal definition of ownership of these organs. His interpretation of the paradox is that a person who is no longer whole is no longer himself, in spite of being a transplant survivor himself, and even less so when the piece in question wasn't given with consent. It is fascinating to see the ends to which these characters will go to maintain their autonomy as owners of their own fate and bodies.
The Ship of Theseus is a biological exploration of the concepts of ownership, identity, self, life, death, and all of the rest that goes with it. How much can be given up before it is too much? How much can one sacrifice before those sacrifices rob one of his true, complete self?
The answers are complex and different for everyone. You may find yourself identifying with a character who made me uncomfortable, but I'd wager that no matter who you are, you'll find yourself somewhere in these stories. This film is a rare treat that deserves attention, a film that will make you think, maybe even make you angry, but I can almost guarantee that it will at least make you feel, and that's why I go to the movies.

The Ship of Theseus plays tonight, April 12th, at 9:30 at the ArcLight Hollywood as part of the Indian Film Festival of Los Angeles.

More about Ship of Theseus