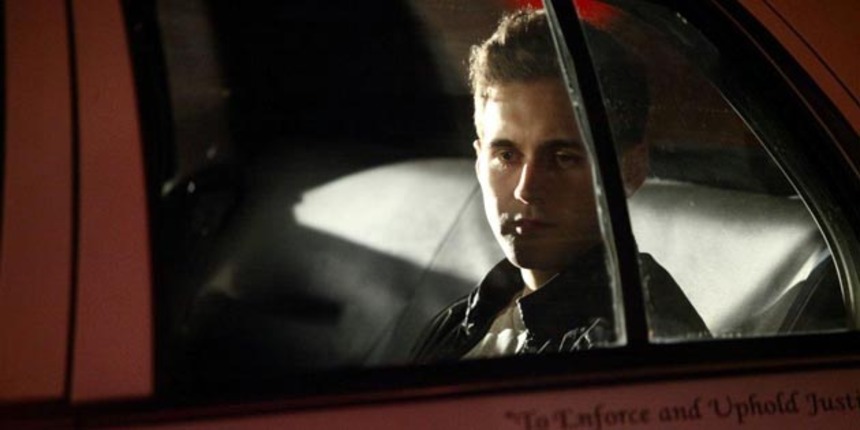 Shedding light on important issues through the power of narrative filmmaking can be a tricky proposition. The very nature of fictional storytelling can sometimes make the issues brought to the forefront seem less worthy of inspection (ie: "it's just a movie"). At the same time, calibrating a film's emotional impact to a pitch perfect balance, somewhere between ineffective and sensational, is a razor-thin tightrope walk. Coldwater, directed by Vincent Grashaw and written by Mark Penney, unfortunately stumbles at the starting gate and never fully recovers.

The film begins with teenager Brad Lunders (P.J. Boudousqué) being snatched from his bedroom in the middle of the night by unknown assailants. Within a few minutes, it's made clear that these strange men have come from a juvenile reform facility, and are ostensibly there to get Brad's life back on track. Right away we're introduced to the tough-as-nails man running the show, retired Marine colonel Frank Reichert (James C. Burns), and it becomes clear that this place known as Coldwater is not an ordinary juvenile detention center. Brad and his peers are subjected to mile-long runs, dehydration, and physical intimidation that eventually escalates into full-blown beatings and torture. Simultaneously, we're treated to several long flashbacks that recall the chain of events that led to Brad's incarceration at the rehabilitation center (a moving if typical account of a frustrated youth's small-time drug dealing gone horribly wrong). As time ticks by, Brad and the rest of those residing inside Coldwater go through significant changes as the center comes under increasing scrutiny and tensions between administration and inmates simmers to a boiling point, threatening to explode at any moment.

As noted in the film's closing credits, the issue of oversight in these sorts of privately run youth rehabilitation programs has gone largely ignored, and real-life deaths at places like the fictional Coldwater are not altogether uncommon. Horrifying as this factoid of information might be, Coldwater approaches a potentially compelling story and set of issues with tools that are ill-suited to the job. The script, a bit too self-conscious of its own moral outrage, is part classic prison life tale, part Lord of the Flies homage, but the fatal flaw lies in Mr. Penney's decision to stuff his story with appeals to raw emotion and visceral discomfort rather than examining the lives and characters of the young men in this terrible place, let alone the grown men who torment them. We're not given any room to empathize with Brad beyond the objective tragedy of his circumstances; vague reference is made to a deceased father and a tense home life, but without any information to flesh out the choices and missteps that landed him in Coldwater to begin with, Brad becomes paradoxically passive, despite steadily pushing the increasingly horrifying story full-steam ahead. Likewise, Colonel Reichert is only given a tiny window to show some sort of real person lurking underneath the façade of a villain that is almost cartoonish in his overt evilness, and then descends into near-parody in the film's third act.

It seems callous and cold to call a story like Coldwater melodramatic, given that this film at least draws from a well of truly tragic events, but without any glimmer of humanity from either the inmate teenagers or the sadistic guards, the cycle of violence on display rings hollow and leaves a viewer feeling numb. The world explored is a fascinating one, and it's ripe for inspection, but Grashaw and Penney seem convinced that the only way to truly make the criticisms in Coldwater resonate is to continually up the ante, resulting in a kind of thematic assault that leaves the audience cold. The twists and turns of Brad's dark journey are riveting enough, and the explosive finale is satisfying in an immediate, gut-punch sort of way, but the end result of all the sound and fury ends up being less than the sum of its parts.

The cast of Coldwater runs the gamut from serviceable to better than average, but none of the performances stand out because of the poorly drawn characters they inhabit. The aforementioned colonel is the most likely candidate for a compelling player, but James C. Burns does his level best with what begins as a fascinatingly flawed villain and turns into a caricature with confusing abruptness. Likewise, leading man P.J. Boudousqué is entertaining enough to watch on screen, and possesses an intensity and conviction that never bores, but hardly electrifies. Likewise, Coldwater's visuals are spare and utilitarian, with the bulk of the film being contained inside a run-of-the-mill area that is never photographed in any interesting way. For a film that takes place entirely within a confined location, Coldwater has remarkably little sense of space, drifting aimlessly from one expository scene to the next.

Ultimately, Coldwater disappoints, not because it is flawed from the get-go, but because it represents a potentially incredible concept that fails to fully execute. A more sober and restrained narrative may have caused the scenes of brutality to stand out in stark relief and move audiences to wonder about the nature of authority and disobedience, but Coldwater insists on ratcheting all engines to 11 from the word go, and the result is a noisy and inefficient machine that achieves little beyond sheer stimulation.