SXSW 2013: Drafthouse Films Adds Some CHEAP THRILLS To Its Roster! 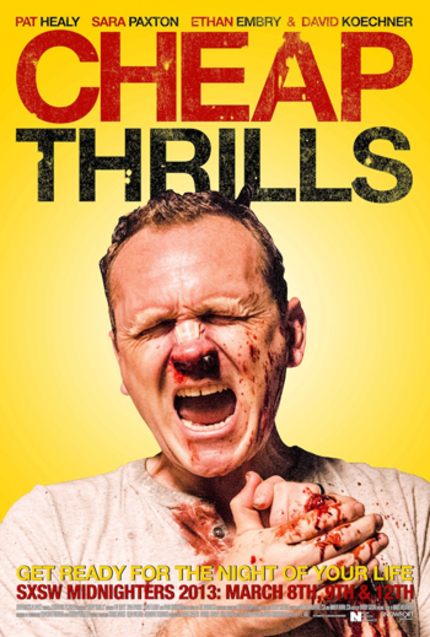 Hot off its World Premiere during the midnight screening on March 9th the U.S. distribution rights for the comedy thriller Cheap Thrills has been picked up by Drafthouse Films and Snoot Entertainment. The film was produced by Snowfort Pictures, who have such films as The Aggression Scale, Jodorowsky's Dune and also comes to the fest with Big Ass Spider! New Artists Alliance also produced the flick; another project of theirs, Milo, is also having its World Premiere at the fest.

Recently fired and facing eviction, a new dad has his life turned upside down when he meets a wealthy couple who offer a path to financial security... but at a price.

I would add a quote from Peter's review of the film but as you can read below he is already quoted in the press release. You can find his full review in the links below.

AUSTIN, TX - March 11th, 2013 - Drafthouse Films, the film distribution arm of the Alamo Drafthouse Cinema, in partnership with Snoot Entertainment, acquired US distribution rights to the twisted dark comedy thriller Cheap Thrills following its world premiere at the 2013 SXSW Film Festival. The directorial debut from E.L. Katz stars Pat Healy (Compliance) as a recently fired father facing eviction who agrees to take on an escalating series of insane challenges in exchange for cash payments from a rich couple with a twisted sense of humor. The film also stars David Koechner(Anchorman 2), Sara Paxton (The Innkeepers), Ethan Embry (Empire Records) and was penned by Trent Haaga (Deadgirl) and David Chirchirillo. A VOD and theatrical release in a minimum of 20 markets is planned.

The film debuted as part of SXSW's Midnight section where it received praise from critics and thrilled audiences with its unique blend of social morality play, visceral brutality and razor sharp wit. "Class warfare comes perversely home in Cheap Thrills," says Peter Martin of ScreenAnarchy adding that it is "a fiendish, fierce, and funny morality tale about the true value of money." James Rocchi at MSN Movies wrote that the film is "cynical, amoral, tense and superbly shot and performed."

"We are always in search of smart genre fare with defined characters and powerful performances. And we found it in Katz's uniquely disturbing, funny, and remarkably thrilling film," says Drafthouse Films founder & CEO Tim League, "we are proud to welcome Cheap Thrills to our roster and we are anxious to unleash it upon unsuspecting audiences."

"Cheap Thrills is the darkest of comedies and the smartest of thrillers, and we're beyond excited to have a chance to work on this amazing film with Drafthouse Films," adds Keith Calder, president of Snoot Entertainment.

Producer Travis Stevens says, "Drafthouse Films is a company that built its name on releasing high quality, f'd up genre films. These are exactly the types of films we make. Eager to unleash the lunacy of Evan Katz's directorial debut on to the world with them."

Gabriel Cowan of New Artists Alliance adds "This all star team is sure to find every messed up degenerate that will enjoy this disturbing, hilarious directorial debut"

The deal was negotiated by Tim League and James Emanuel Shapiro on behalf of Drafthouse Films and Josh Braun and David Koh of Submarine on behalf of the film's producers.

Do you feel this content is inappropriate or infringes upon your rights? Click here to report it, or see our DMCA policy.
Cheap ThrillsDrafthouse FilmsNew Artists AllianceSnowfort PicturesSXSW 2013