RIDDICK Returns, With A Creature-filled Teaser 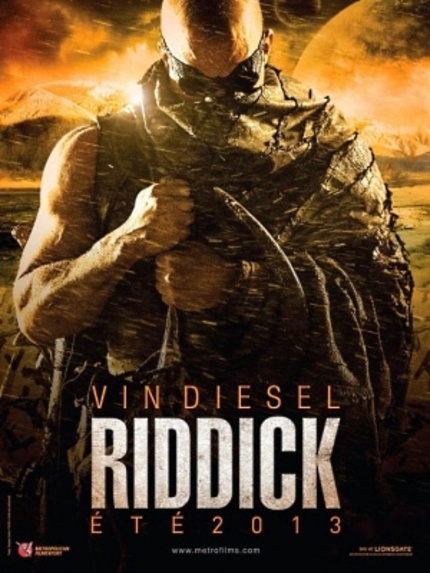 This September, Vin Diesel and David Twohy will present the next part in the Riddick franchise they have created: a film which will be called, simply, Riddick.

The character of Riddick first appeared as an antihero in the science fiction horror film Pitch Black, released in 2000. In that film, a spaceship crashes on a deserted planet, and the survivors discover that whenever it gets dark, millions of monsters appear. The strongest man in the group, Riddick is a convicted murderer who has surgically enhanced eyes, allowing him to actually see the creatures.

Lean and mean, Pitch Black turned out to be a far bigger worldwide success than anyone expected, and it boosted the careers of both director David Twohy and actor Vin Diesel. Both decided to develop the character of Riddick further, and he has since starred in two (rather good) videogames, a direct-to-DVD animation and a huge whopping film completely dedicated to him: The Chronicles of Riddick, released in 2004. In that film, Riddick fought (and defeated) an apocalyptic army of planet-conquerors, and became emperor. Wait, what?

The Chronicles of Riddick did not quite become the success many people had hoped though, so the plan of making Chronicles the first in a large series was put on the back-burner.

But now, nine years later, we do get the next film. Riddick is now once again stuck on a planet full of angry predators, and if that wasn't enough people are about to start hunting him too. Karl Urban stars as well.

Here is the teaser, and as you can see there are many familiarities visible for fans of the franchise.
Tweet Post Submit