US Trailer For Studio Ghibli's FROM UP ON POPPY HILL 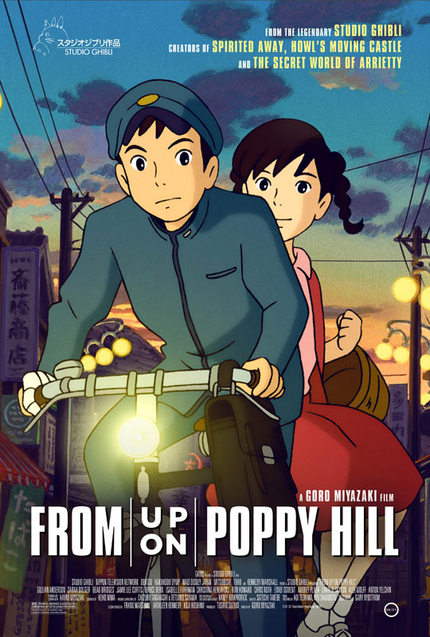 Though it has taken a little while to arrive on local shores, Miyazaki Goro's sophomore film, From Up On Poppy Hill, hits US screens in March and fans of the studio would do well to check it out. Much more in line with the quieter, more dramatically focused titles in the Ghibli canon - films like Only Yesterday, for example - than the more fantasy oriented titles From Up On Poppy Hill is a lovely little tale that marks a major step forward for the younger Miyazaki.

From Academy Award(R) winner Hayao Miyazaki and director Goro Miyazaki comes this uniquely inspired coming-of-age story. Set in Yokohama in 1963, as Japan is picking itself up from the devastation of World War II and preparing to host the 1964 Olympics, the story centers on Umi and Shun, two high school kids caught up in the changing times. But a buried secret from their past emerges to cast a shadow on the future and pull them apart. With its rich color palette, stunning exteriors, sun-drenched gardens, bustling cityscapes and painterly detail, From Up on Poppy Hill provides a pure, sincere, and nuanced evocation of the past, and marks yet another creative triumph for Studio Ghibli.

This US trailer almost entirely omits what is actually the largest single storyline in the film, which seems an odd choice, but is nonetheless completely true to the overall tone and themes of the film. Plus you get a chance to hear the US dub cast - including Christina Hendricks, Ron Howard, Aubrey Plaza and Jamie Lee Curtis - in action. Check it below.