Sundance 2013 Review: WE ARE WHAT WE ARE Is Tastefully Macabre 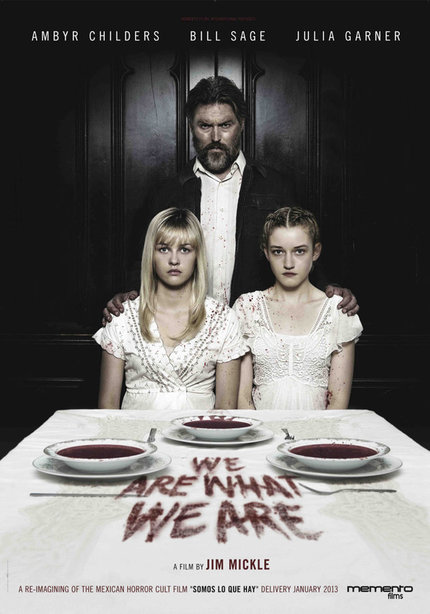 Let's get this out of the way right off the bat: We Are What We Are is not a remake. Differing greatly from the original Jorge Michel Grau Spanish language version, the creative team of Jim Mickle (writer/director) and Nick Damici (writer/co-star) have taken the original concept of ritual cannibalism and inverted it, switching almost every trope in the initial version, and spinning it into something completely their own.

A local coroner, Doc Barrow (played by scene stealer extraordinaire Michael Parks) whose daughter had gone missing the season before, slowly begins to suspect the anti-social Parker family as being involved, and tells the local sheriff (Nick Damici) of his feelings. Young Deputy Anders (Wyatt Russel, son of Kurt) meanwhile has an infatuation with the beautiful Iris, who obviously wants to return his affections but keeps her suitor at a distance due to her duty to her family. When a human finger bone is discovered, evidence starts pointing to foul play in the small community, and the tourniquet on the Parkers slowly tightens, as dark secrets (and worse) are threatened to be revealed. Plot elements are deftly juggled by Mickle, as the storm worsens, the clues amass, and tensions mount.

I doubt I'm giving anything away in the following, but for the sake of those who know nothing about the film(s), possible spoilers ahead.

It turns out the Parker family have a lineage going back to the settler days, when in a Donner Pass type of event, their forefathers are forced to consume human flesh. Now integrated into the modern Parker clan as defacto wack-a-doo religious ritual, the proverbial clock is ticking as patriarch Frank Parker grows more sick, while simultaneously insisting on seeing their ensuing feeding through. Eventually, the town officials become aware of the ugly truth, and the raging storm brings flood waters that threaten to literally dig up the past, bringing the victims' remains to the surface. Caught in the spiral also is caring neighbor Marge (Kelly McGillis) a bit of an old maid who has taken to watching over the girls and their little brother, and helping them through the trial of losing their mother. Let me say here, it's so great to see McGillis become a Mickle cast regular, this being her second film with him, and proves that real screen talent elevates material (which the genre sorely needs right now).

The most overt change is the family structure being shifted from young teenaged boys, a little sister, and a mother trying to keep things together (as in the original) to a literal "flip", where now we have a widowed father, his two young daughters on the verge of womanhood, and their little brother. It seems a bit literal on paper, but in the context of Mickle's vision it's actually a revelation. Changing the setting from a city to a small almost Norman Rockwell-esque Any Town, America strengthens the backstory of just how the Parkers came to consume human flesh, and brings it all "home" so to speak.

I've been a fan of Jim Mickle's since his ultra-low-budget debut Mullbery Street, which evoked the goofy yet fun horror films I grew up on in the 70's, without placating to the romanticized notion of what "grindhouse movies" were like. Simply executed, and done with limited resources, Mullberry Street came off vintage in the most organic way. Then came Stake Land, which landed in the number one spot of my favorite films of the year when it was released. A high tension, non-stop action film about a group of survivors making their way during a vampire apocalypse, full of monsters and heroes, it was basically everything I wished I Am Legend had been.

Now, there is We Are What We Are, which is slower paced, poetic, and 100% driven by it's characters. Again, a sad and macabre family drama, where "horror" is merely a framework used in which to tell a story rife with a deeper meaning and more serious agenda.

This all adds up to proof for me that Jim Mickle is the strongest new voice in American genre film, one I can only compare to the golden era of John Carpenter. If there is any justice (and good taste) among fans of the new wave of USA based scaremeisters, Mickle will stand at the top of the heap after his version of We Are What We Are is released. Hopefully he remains working in the field of horror, because domestic genre film really needs someone like him right now. His work isn't aimed at a particular generation like, say, Ti West or Adam Wingard who are what I call "Hipstorror", peppering their films with beany wearing, pegged pants, mumbling, mustache sporting 20-somethings, which I fear will date their films and not in a good way. Nope. Mickle writes characters that are timeless, and have a much wider range. This all serves to root even his more unbelievable elements in reality, which I again point to the mantle of Carpenter and say "Hear me now, know I'm right later" when I declare that it is indeed Mickle who is the hopeful giant to watch.

We Are What We Are is a mature "horror" film, sharing more with something like The Reflecting Skin or even Twin Peaks than it does The Hills Have Eyes, and is highly recommended to fans of more cerebral terror. Snapped up after Sundance by distributors eOne, hopefully We Are What We Are sees a proper theatrical release. This could be a real crossover and flashpoint (deservedly) for Mickle and Co.


Sean Smithson contributed to this story.

Glad to hear that this is different from the original - and can be compared to Twin Peaks! :) But let's get this out of the way right off the bat: it's still a remake. If you use the brand name of another work that had a certain amount of popularity and plan to ride the wave of that popularity/notoriety, then you get slapped with a "remake" label no matter how much originality and unique artistic merit you inject into it. It might be a "different" remake or a "great" remake or whatever adjectives you'd care to use to distinguish. But it's still a remake. "Re-imagining" works, too, as that poster above declares. But I don't think it's right to try to absolve any movie of its very consciously, deliberately chosen roots. There's a difference between being inspired by something and remaking/re-imagining something.

For me, this is "in name alone". I really did find it that different. or I could put it into the Carpenter's THE THING/ INVASION OF THE BODY SNATCHERS 78/other remakes that were better than the originals here* column now that you mention it unarguably being a remake.

Either way...it was darned good, I hope you enjoy it even half as much as I did.
"Ravenous" is another film it can be compared to, which in my world is a realllly good thing! :)