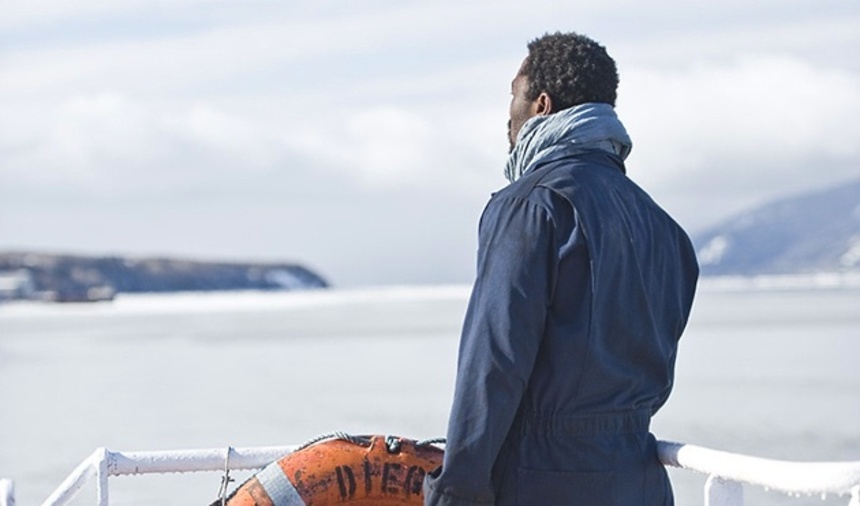 One of the many world premieres this year at the International Film Festival Rotterdam was the Canadian-Belgian social drama Diego Star, about a sailor from Ivory Coast who is left abandoned near a shipyard in ice-cold Canada. Diego Star was also one of 10 films nominated for a Big Screen Award, a new audience-awarded prize that grants the winner guaranteed theatrical distribution in The Netherlands, Belgium and Luxembourg. Other titles nominated were Odayaka and Drug War (both reviewed here at Twitch).

So is Diego Star worth checking out? Read on...

The Diego Star is a cargo ship, stranded with a busted engine in a Canadian harbor. The Russian owner is quick to blame the technicians for the failure, but the African Traoré takes a stand and testifies to the Canadian authorities about the bad maintenance and faked papers.

While the ship is being repaired, the crew is lodged with the local population. Traoré becomes good friends with the single mother who houses him, but then he discovers that he has been fired...

Frédérick Pelletier's debut feature tells a simple story about a man caught up in a dreadful injustice. Then again... anyone who has ever been shoehorned out of a company for a bullshit reason will probably feel the same as Traoré does in this film. The fact that he is left marooned more than 10,000 kilometers from home, by the company he works for, is as vile as corporate behavior gets. But it is still in Canada, meaning Traoré will eventually be sent back to his home country as an illegal.

This means that the story is just a bit too mundane to be stretched to the length of a full feature. The film is still heart-wrenching at times, due to the excellent acting by Issaka Sawadogo and Chloé Bourgeois, but when it's over you're left wondering what message you ought to take with you.

Canadians are bastards? No, they aren't, at least not in this film. Let's all be nicer to each other? Never lie to your landlord? Or: watch out, unscrupulous corporations are careless with people?

Well, yeah, that's all there, especially the last one. Although if you're not careful, that part might also be construed as AVOID WORKING FOR RUSSIANS.

But message aside, Diego Star is still pretty good. Seeing the daily life of Traoré and the young single mother who temporarily takes him in is not exactly a chore. The film is too well made for that, even if it lacks a bit of salt and pepper, and it will be interesting to see what director Frédérick Pelletier will do next, as he is obviously a talent to keep track of.

Diego Star is a good little drama, well acted, well made, and everyone in the film leaves a strong impression. Seen as a whole, however, it just misses out on being great.