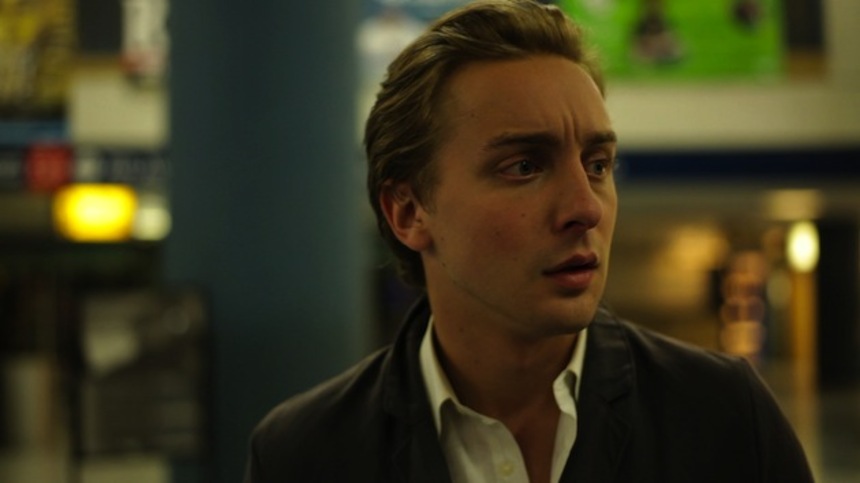 Nadia Szold's feature debut Joy de V. charts the speed of dreams; the layers and shapes, patterns and cadence of a fever dream. Of a man met with madness that may be of his own doing, by the flick of his lighter's flame, or that of the forces beyond him, out to get him, out to find him, and to leave him.

Roman is a small time con artist in New York. He supports his pregnant wife Joy with a long-term con of faking mental illness, which results in disability checks. A doctor visit every once in a while and he is free to keep to himself, to be with Joy, or do the odd con job when the mood is right. One day Roman finds Joy gone, her purse and phone lying on the kitchen counter. Though the film moves with a languid stride, Roman's journey to find Joy is nothing less than desperate.  Stumbling though, as much as he stalks each frame, each labyrinthine New York City dream street, Evan Louison as Roman is a marvel to watch. His gait is lopsided or maybe wide, perhaps narrow, his mind full of cracked and cracking doubt, his eyes sullen, dry/wet with no sleep and too much sleep. Like the European star of a Melville flick that never was, or some future Nosferatu, Louison exudes the madness of a haunted youth, old before his time, as much as he holds close to his chest a calm and collected shape of a man on a mission.

His search for Joy is a fugue, patterned on baroque, existential gazes and gestures by the many strange folk he meets along the way. From the Borough Psychic with the drawn on eyebrows to Joy's ill aunt and an old friend (an old flame) and her dog, these are characters that we feel we've seen before, perhaps in a Bunuel movie, or maybe a Fellini... they're immigrants of the last century's imagination, vaguely Italian or French, German or Spanish, many are beautiful young ghosts, others are old women haunted by their sparkling youth; Distractions that set his path alight, each encounter sets another silky dreamscape down atop Roman's mind.  Szold's choice to blanket the film with narration is one I found to be especially wonderful -- and this is coming from someone who does not prefer voice over. Roman talks to us, to Joy, to some specter in the back of his mind, or perhaps one that is projected on the movie houses he frequents, with the cadence of a frightened child who has just read a passage from Sartre or Nietzsche; frightened by reading something he doesn't understand but knows . His voice is cream and honey spread over a bed of rusty nails, his eyes glassing over as his thoughts unwind him.

Tristan Allen's cinematography falls beautifully in step with Szold's musical choices which include Arvo Part and equally minimalist, if slightly more modern, original contributions from John Prince and Noah Plotkin. Called forth, mirrored and contrasted by the gloomy twang of the score's guitar, there is space in these images, a boldness; if they are not already worn, they are beaten down, but beaten clean. Szold's New York is an M.C. Escher skewing of the Boroughs; streets and neighborhoods collapsing in on each other at the same moment that they unravel out like a python. The East village is Staten Island, the night, the day. The cold, overcast influence of Kubrick and Polanksi is felt here, but so to did I sense something of early Bertolucci and perhaps even the absurdity of Suzuzki Seijun. Coupled with Kristen Swanbeck's graceful, melancholic edits and Raphael Laski's foghorn-like sound design it's a captivating cinematic experience that feels like a heavy vapor settling in on one's chest. While this leads to an ending I felt that was lacking some sense of weight, an ethereal weight as it were, Szold's vision of a man losing sight of his world is surely a standout of this year's Slamdance.

It is clear that Nadia Szold has collected a marvelous troupe of creatives, and I am very curious to see where they take us next.