Slamdance 2013 Review: HE'S WAY MORE FAMOUS THAN YOU Is Excessive, Obnoxious And Hilarious 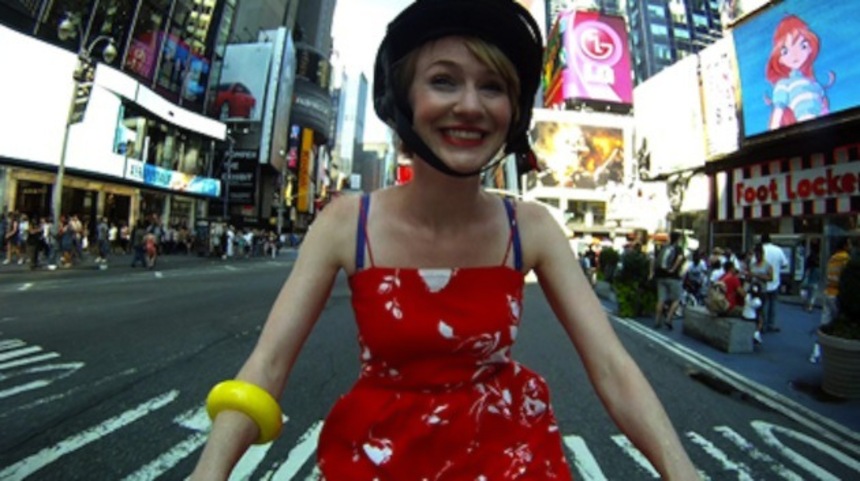 He's Way More Famous Than You is a zany bit of fame-whore lambasting, with co-writer and star Halley Feiffer fearlessly taking aim at just about everything under the Hollywood/celebrity sun, most notably herself, and more importantly her appearance in "Noah Baumbach's cinematic masterpiece" The Squid And The Whale. As an alcoholic narcissistic, nightmare inversion (explosion?) of herself she squeals across the screen like a manic pixie banshee girl, dead set on making her own movie, which will, in her mind revitalize her in-the-toilet career. To do this, she finagles the help of her brother Ryan (co-writer Ryan Spahn) and eventually, with much begging and whining down the pipeline, his partner Michael Urie aka the gay guy from Ugly Betty, aka the guy who is gonna direct their movie, aka the guy who is directing the very movie we're watching.

The self-referencing and meta humor comes thick and fast, the cavalcade of A-listers, B-listers, and all the way down to Z-listers. comes stampeding in, game to blow up their egos with either cartoonish glee or straight-man sobriety. Two standouts include Feiffer pawing at the window of Ben Stiller's smart car (yes, a smart car), apologizing to him about the time they were on Broadway together and she asked him if he'd "like to put his hot dog down her hallway." Another fine sequence is when Feiffer tries to seduce Ralph Macchio. Yes, you heard that right, Ralph Macchio. Oh, and this comes after Feiffer's absurdly melodramatic reenactment of a scene from The Outsiders. On the floor. Of a crowded restaurant.

If you don't work in the industry or pay attention to Indie or Hollywood, He's Way More Famous Than You may at times play like an inside joke, but it is accessible and broad enough and funny enough to work for most audiences that can stomach an excessive, garish sense of humor. Think of it like a Mel Blanc/Loony Tunes cartoon coupled with the vain, vapid vanity of a Diane Keaton-type. While the final act never felt as furiously funny nor as tightly focused as the proceeding ones (The ending I felt was a misstep with an abandoning of an already lame commitment to a moral lesson), Feiffer is a marvel to watch... that is if you like watching vain people making utter fools of themselves.

So while it is by no means a film outside of the box, He's Way More Famous Than You does what it needs to do to make its audience happy. It makes them laugh. Quite a lot.

Do you feel this content is inappropriate or infringes upon your rights? Click here to report it, or see our DMCA policy.
ben stillerhalley feifferhe's way more famous than youmichael urieralph macchioryan spahnslamdance