Review: BROKEN CITY Falls Down, Can't Get Up 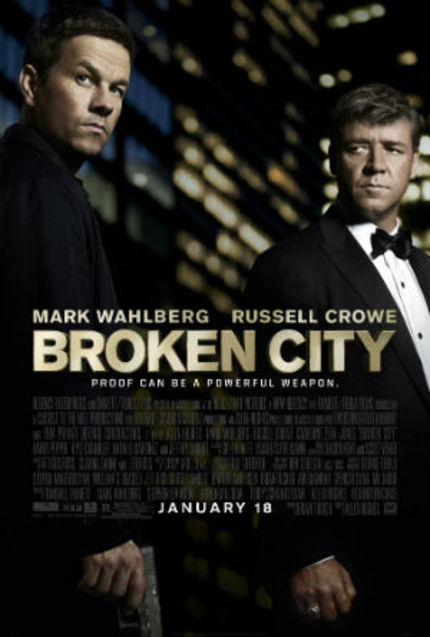 Murky, unclear, and blunt, the first sequence in Allen Hughes' Broken City proves to be representative of the movie as a whole.

NYPD Detective Billy Taggert (Mark Wahlberg) is presented as a wronged hero, an honorable officer who shoots a suspect in self-defense, yet is forced to resign by the sympathetic Mayor Hostetler (Russell Crowe) and antagonistic Police Commissioner Fairbanks (Jeffrey Wright). What were the circumstances surrounding the shooting? Why is the Mayor so friendly? Why is the commissioner so angry? And why are the interiors bathed in so many shadows?

In the original screenplay credited to Brian Tucker, those are questions that are raised but then pushed to the sideline as the story jumps forward to the fall of 2012. Taggert is now a kind-hearted private eye with an adorably sassy assistant named Katy (Alona Tal); he specializes in cases of suspected infidelity, which he proves by taking photos. Then it's up to Katy to collect on the wronged, deadbeat clients who take advantage of Taggert's refusal to accept any down payments. Despite Taggert's inability to maintain a steady stream of income, he lives in a very decent apartment with his girlfriend Natalie (Natalie Martinez), an actress whose first starring role in an indie film is about to have its premiere.

Out of the blue, Taggert gets a call from Mayor Hostetler, who wants him to get proof that his wife (Catherine Zeta-Jones) is having an affair. Without hesitation, Taggert accepts the job, and a down payment of $25,000, breaking his own rule. (The total fee of $50,000 will cover all the outstanding late payments due from his other clients.) He quickly and easily gets photos of the Mayor's wife meeting a good-looking man (Kyle Chandler), who proves to be the campaign manager of the Mayor's rival (Barry Pepper) in the upcoming election.

Now, at this point, one might expect that an experienced New York City police detective, a man who has gained years of additional experience as a private investigator, might question further the timing of the Mayor's offer of a job. Or ask himself why the Mayor selected him for such a sensitive assignment. Or consider how such an affair, that the Mayor says has somehow eluded detection by the press and everyone else in New York City, would be so easily revealed after a single day by an admittedly non-tech minded investigator.

Taggert, however, appears to be a very dim bulb, reduced to going through the motions, apparently unhappy with his work and his life and his sobriety for the past seven years. Oh, have I mentioned that seven years have passed since the opening sequence? No? That's because the movie doesn't make it clear that that much time has gone by until it's far too late to do anything but add confusion to the plot. And there are very few hints given that Taggert and Natalie are having any trouble in their relationship until Taggert blows up at the premiere of her movie, when he decides she's enjoying her naked, on-screen sex scene a little too much for his taste. 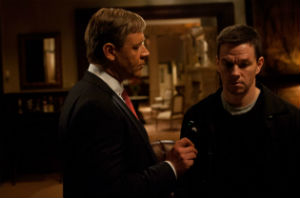 The holes in the plot are gaping, and the lack of logic in the story's development is obvious, suggesting that director Allen Hughes and editor Cindy Mollo made conscious decisions to retain the wisecracks and occasional bursts of action rather than worry overmuch about the dramatic structure. That might have worked if the overall pace of the movie wasn't plodding and funereal.

The look of the film, as shot by cinematographer Ben Seresin, is dismal and gloomy, which indicates that Hughes was aiming for a noir-ish tone, a character study bathed in grey. But Taggert never comes clearly into focus. On the one hand, he's a loyal man who stands up for the little guy. On the other hand, he's basically friendless, holds grudges, is homophobic without admitting it, is wildly jealous, prone to violence, and an alcoholic who falls off the wagon without any apparent repercussions. It's hard to understand such a contrary cuss whose motivations change from moment to moment, much less sympathize with him as a solitary knight charging up a hill to slay a corrupt political dragon.

Built as a star vehicle for Wahlberg, precious little room is left for any other actor to make more than a first impression. Alona Tal probably fares the best, with Kyle Chandler, Natalie Martinez, and Barry Pepper doing good work within a limited framework. Crowe growls out his lines in a weird accent that sounds more like Boston than New York, and Wright barks his disgust with acid. Griffin Dunne shows up, but doesn't have much to do.

The movie falls down early and never gets back up. Whatever promise Broken City may have once shown appears to have been left on the editing room floor.