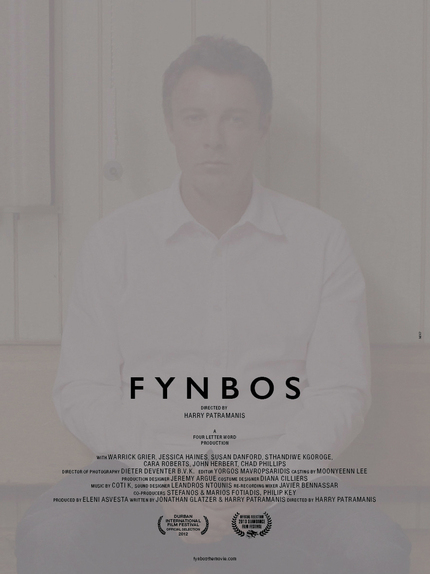 Selected for both the Berlin and Slamdance film festivals following a world premiere in Durban, award winning commercial director Harry Patramanis has crafted a unique and haunting dramatic thriller with his debut feature, Fynbos.

A real estate developer, on the brink of bankruptcy, travels with his wife to a lavish and remote glass house bordering an informal settlement on a sweeping landscape in the Western Cape of South Africa. He is desperate to sell it. When his wife goes inexplicably missing, stifled by a sense of looming distrust and financial pressure, he is caught in a maze of missteps and uncertainty. What transpires within the walls of this glass house then has little to do with money and everything to do with the human condition: souls are left pondering the line between what is real and what is perceived.

The polar opposite of what is typically expected when a commercial director makes the move to the feature world, there is not only no rapid cutting and visual trickery here. Instead Fynbos is a film that not only trusts the audience to engage with it but requires them to, with the events of the film open to wildly different interpretations.

Twitch is proud to present the first trailer for the film, a piece every bit as haunting as the film itself is. Take a look below.

"Twitch is proud to present the first trailer for the film, a piece every bit as haunting as the film itself is. Take a look below."
Looks interesting, thanks Mr Brown.