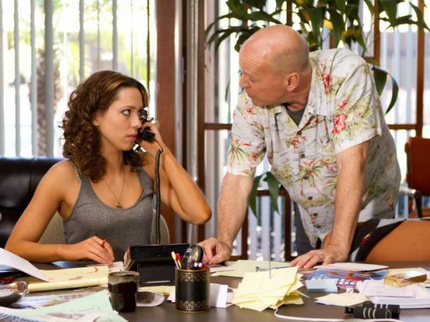 Let me begin with a slight word of defense on behalf of Stephen Frears' Lay the Favorite: The movie isn't as scorn-worthy and unpleasant as most reviews will likely make it sound. It's a perfectly harmless, casually watchable, movie-of-the-week type romp that never really takes enough chances to really risk being actually unpleasant or infuriating. It would probably be an agreeable movie to drift in and out of during a Trans-Atlantic flight.

Unfortunately, it is not playing on airplanes, but rather in theaters, and it was directed by the often-great Frears (The Queen, The Hit, The Grifters), who it seems should be able to tease more out of the Las Vegas sports-betting milieu, especially with such a game cast including Rebecca Hall, Catherine Zeta-Jones, Bruce Willis and Vince Vaughn. And yes, it's a bit telling that I already described a movie about gambling as one that doesn't take chances.

But besides the expectations factor, I suspect most reviews will sound agitated because, while the movie is by no means excruciating to watch, figuring out how to write an interesting review of such a wispy, inconsequential movie is a different story. The lead to my first draft of this review was very mean and direct, mostly because I was annoyed that I was required to do more than take a picture of myself shrugging my shoulders.

For example, I should say something coherent about the plot. But rather than curse my way through a laborious paraphrasing of the press notes synopsis, let's try something slightly more fun. I'll introduce the characters and you try to figure out most of what happens. Ready?

Rebecca Hall plays Beth Raymer, an exotic dancer turned cocktail waitress in Vegas who, despite being ditsy is actually very good with numbers. A quick word about Hall before we continue with the game -- she is actually fantastic in the film! While the rest of the cast here delivers serviceable, professional versions for the types of characters they are known for playing, Hall completely immerses herself in her part and is responsible for the only surprising and lively moments in the film. It's not really enough to buoy the film, but it's a testament to her skill and range all the same.

Okay, onto the rest of the characters. Raymer (who, remember, is good with numbers!) meets Bruce Willis, who plays a seasoned betting-man who runs his own mini-sports-gambling organization. They do more than just bet on sports... they make phone calls and take other people's bets and lay odds, but I never quite understood it because unlike Raymer, I am bad with numbers. The movie generally makes it clear how you're supposed to feel about each decision that Willis and his cronies make though.

Anyway, Willis operates his gambling operation with honor and passion, and delights in sharing his love of his occupation with others. He's not just in it for the money, and also he's married to the frigid and easily jealous Catherine Zeta-Jones. He has an old friend, played by Vince Vaughn, who is energetic, magnetic and operates his gambling business without honor, and often, on the wrong side of the law. He delights in sharing his passion for money with others who can help him in some way.

Did you guess most of what happens? Well, it turns out that all of that is based on a true story which was turned into a memoir by the real Beth Raymer. Perhaps adherence to Raymer's version of the story is part of what made the movie so bland because, dammit, sometimes fiction is stranger and more interesting than truth. Also, sometimes people whitewash versions of their own life to make themselves seem totally likable and to avoid making friends and acquaintances mad. I have no idea which is the case here, but regardless, the true-story angle does not make the movie any more interesting.

Whatever. It's all packaged with nice, even lighting, crisp cinematography that keeps everything in focus, a number of obvious music cues and Joshua Jackson playing perhaps the blandest character in any film this year. Figuring out whether this is the fault of Jackson or the way the part was written is a sort of unsolvable chicken-and-egg type puzzle.

I'm not going to hazard a guess about that, nor am I going to speculate as to what Frears or any of the cast saw in this project, or what their intentions and ambitions were. Did they do it for the money? The chance to spend some relaxing time in sunny locations? Did they all meet the real life Beth Raymer and just find her that charming? It doesn't really matter in the end. The movie exists, albeit just barely, and as I said, while it's not particularly memorable, funny or affecting, it's not offensive, off-putting or anger-inducing either. Unless you have to write a review of the thing.