ADOLF Has Left His Bunker And Needs Your Money! 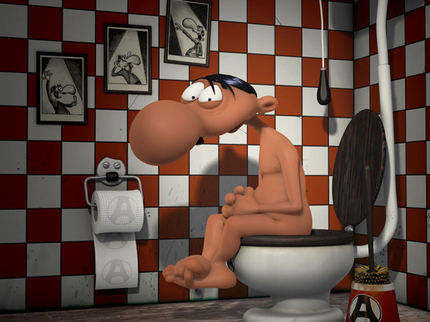 I'm not up to date on my European-based irreverent humor but if anyone seemed liked a good target for toilet humor comedy it would be Hitler. And lo and behold German comic book artist, Walter Moers, wants to bring another of his creations, Adolf, die Nazisau, to the big screen.

Walter Moers... has decided to dedicate a feature film to his character of Adolf, the Nazi pig (Adolf, die Nazisau). In 2005, the latter starred in a video titled Ich Hock In Meinem Bonker ("I'm crouching in my bunker") that became a hit as soon as it was published on YouTube. The same ridiculous accent and toilet humour are now to feature in Adolf - Der Film (lit. "Adolf - The film"), according to the film project's initial trailer made for his fans.

Indeed, the irreverent comic artist is counting on his audience to support his project. Adolf - Der Film is to be funded via crowdfunding through its website www.adolf-online.com. As the temporary trailer explains, after his march to Stalingrad, the animated dictator will only be able to conquer Hollywood with the help of his fans. The film should be ready in 2014.

Do you feel this content is inappropriate or infringes upon your rights? Click here to report it, or see our DMCA policy.
Adolf die NazisauAdolf Hitleranimationcomedycomic bookcrowd-fundinggermanwalter moers