Lucky McKee and Chris Sivertson Declare that ALL CHEERLEADERS DIE 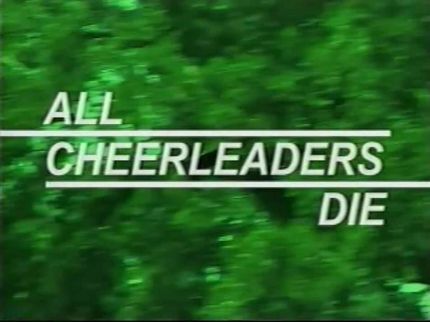 Looks like its bad news for cheerleaders and good news for B-horror fans. Lucky McKee (May, The Woman) and Chris Sivertson (The Lost, I Know Who Killed Me) have announced that they are collaborating on a All Cheerleaders Die, a film which, based on the synopsis, sounds like a supernatural-horror version of Heathers, except, I assume, with more dead cheerleaders.

Maddy Killian is a 17 year old rebel at Blackfoot High School on a mission to take down the captain of the football team. She rallies a group of cheerleaders around her cause, but after a tragic turn of events, the girls are thrust into a supernatural battle that culminates in a mayhem-filled night they will never forget.

McKee and Sivertson are actually going almost all the way back to their college days for this one -- the film is a reimagining of a shot-on-video feature they made together immediately after graduating from USC in 2001. Produced by Modernciné, the film is currently finalizing the cast, with Caitlin Stasey (Tomorrow When the War Began) and Sianoa Smit-McPhee (Hung) taking the lead roles.

More about All Cheerleaders Die