Three Years And A Hundred And Thirty Million Dollars Later, All We Get Is Olga Kurylenko With A Shell On Her Head. First Trailer For Fantasy Fiasco EMPIRES OF THE DEEP. 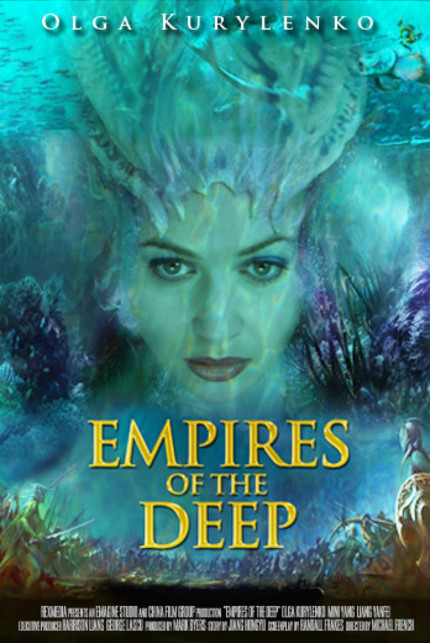 There are in this world certain films that seemed destined to achieve not fame but notoriety through failure on a spectacular scale. Chinese-American co-production Empires Of The Deep has long appeared likely to be one of those and with the arrival of the first trailer we can now say, "Oh, hell yes. This looks horrible in the way that very few things can ever hope to be horrible."

What went wrong? Let's say a whole lot of everything. Word first started to circulate about the project all the way back in February of 2009. The dream project of Chinese real estate tycoon Jon Jiang, who wrote the script himself and partially financed with his own money, the film was originally announced with Monica Bellucci as the star, Catwoman director Pitof helming and Empire Strikes Back director Irvin Kershner on board as a producer. All three left the project every bit as quickly as they signed up. And when you can't keep a guy like Pitof - who has only one made-for-tv credit to his name since the Catwoman debacle - interested in your project, well, you know you've got issues.

Pitof was replaced by Jonathan Lawrence - who also exited and made some strong statements about the production on his way out - before Michael French finished things up. Bellucci? She was replaced by former Bond girl Olga Kurylenko. And Kershner? He doesn't appear to have been replaced by anyone with any real experience whatsoever, which has meant years of delays and cost overruns.

But surely someone must have produced the film, you're thinking. Well, the credited guys are Harrison Liang and Kevin Jiang from E-Imagine Studio, who are the CGI house responsible for the extensive special effects in this tale of a mermaid kingdom. And note I said 'extensive' rather than 'good'. Because the effects are utter trash for the most part. If someone actually spent the reported $130 million that supposedly went into this film then an awful lot of that money found its way to pockets at E-Imagine without ever actually being spent because there's just no way that all that money went in to the product that you're seeing on screen.

But enough of that. Time to judge for yourself. Take a look at Empires Of The Deep below.

More about Empires of the Deep