Review: Decent Marx for HELLO I MUST BE GOING 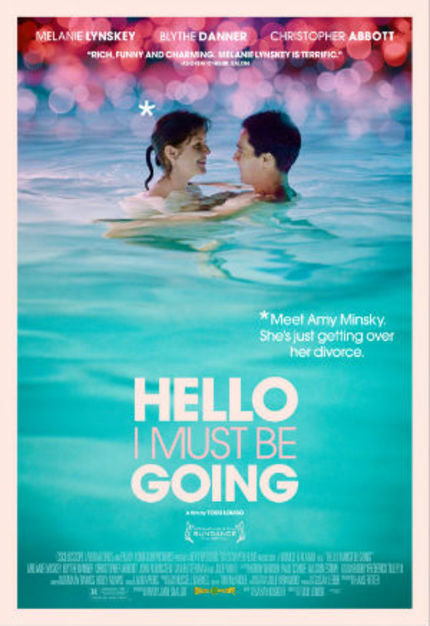 Amy is a woman in trouble. And she doesn't seem to care. (Maybe that is the trouble?) Never mind that she's a quickly aging divorcee living depressively and reclusively in her wealthy parents Connecticut home (she can't even sleep in late, what with all the constant remodeling racket), this woman has lost all interest in doing anything whatsoever with her hair, or even (gasp!) wearing nice dresses. Clearly, she has no idea that she's the star of an American female-targeted feature film.

But that's the thing about Hello I Must Be Going, a pretty subtle comedy from actor-turned-director Todd Louiso (Yes, he was the quiet nebbish clerk in High Fidelity with John Cusack, but he also directed Love Liza with Philip Seymour Hoffman) -- by violating the edicts of so much of what passes for women's films these days (you know them as "chick flicks"), Hello I Must Be Going sticks a landing as one of the more honest films that's actually about a grown woman in a good while.
Never mind that the film, for long stretches, actually appears to be in grave danger of shattering adrift like the ice flows in Griffith's Way Down East (lead actress Melanie Lynskey taking the Lillian Gish role, helplessly along for a seemingly doomed ride). It actually manages to course-correct with reasonable satisfaction, with certain small (by conventional movie standards) character revelations functioning as the last-minute Gish rescuer Richard Barthelmess (to complete the Griffith film analogy).

Once upon a time, native New Zealander Lynskey launched her career in the non-Kate Winslet leading role in Peter Jackson's much-adored Heavenly Creatures. Later in her prolific career, she appeared in a bunch of episodes of the Charlie Sheen sit-com "Two and a Half Men." If this shift is indicative of the film snob-friendly state of her career, then consider Hello I Must Be Going a nice, humble trek back into the realm of respectability -- something she doesn't have to feel guilty about the next morning (even if her character so often does).
All things considered, she's remarkably unafraid to embrace a certain scrunchy-faced non-glamour here, even if Amy at her most bottomed-out-frumpy is not unattractive. But let's put aside such superficial concerns. This is one movie about an adult woman who'd rather be lying in bed watching old Marx Borthers movies; someone that most anyone can relate to, putting a button on the zeitgeisty post-economic crisis malaise, and all that.

For 95 minutes, we follow Amy as she gradually makes the shift from stunted inactivity to a series of seemingly bad decisions. Some of these decisions result in comedy, fulfilling that certain chick flick humiliation quota, while others may or may not take us down a path of self-discovery, a wake up call for the pity partying dejected loser in all of us.
But not really. This is just a small movie about one woman who isn't even interested in getting it together, and does barely anything in the wake of that fact, yet manages to be worth watching anyhow. (Except for maybe one intentionally hard to watch scene that manages to actualize that aspect a little too well. It's when Amy ends up on some sort of cookie-cutter Girl's Night Out, having margaritas poured down her throat by shallow high school acquaintances only capable of saying "You go girl!" and "Wooooo!")

Hello I Must Be Going won't be anyone's favorite movie of the year. It can't be -- that would be too over-achieving for a film whose own internal logic too closely (at times, anyhow) resembles that of its lead character. But if one looks closely, one can maybe see that Louiso is quietly turning the click flick on its side if not its head, a subversive (if stealthy) little maneuver worthy of Amy's favorite fine mess makers, the Marx Brothers. In a slightly weird way, they both sing together to their crusty establishment cohorts:

I'll stay a week or two,
I'll stay the summer through,
but I am telling you,
I must be going.
(Hello I Must Be Going is now playing in limited theatrical release in the U.S. Check official site for theater listings.)
Sign-In to Vote
Tweet 0 Submit