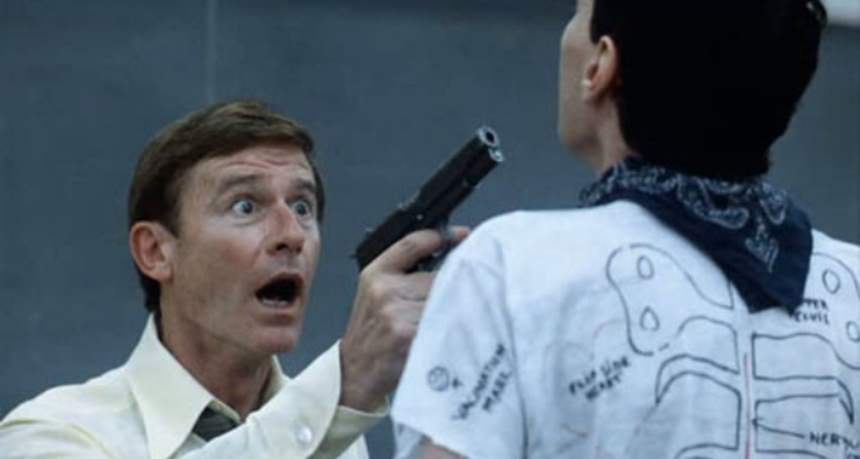 When Mark Lester got up in front of the the audience at this year's Sitges International Fantastic Film Festival to introduce a late-night screening of Class of 1984, his blood-soaked riff on Blackboard Jungle, he declared that it was his favorite film he had ever made. So much so, that he's working on a remake of it right now, which will apparently be finished in May of next year.

He went on to say that he was especially proud of the film because it was prophetic. I raised my eyebrows a bit at this claim, since I haven't read any articles in the past ten years about bloodthirsty students kidnapping their teacher's wife and gang-raping her before he slaughters all of them with a table saw (among other things). Nor have I ever heard of a teacher bringing a handgun to class and using it to force his students to pay attention to the knowledge he's trying to impart. But, Lester went on and keyed in on the cautionary message at the beginning of the movie (something along the lines of: "This movie isn't a reality yet, but it will be soon!"), so I guess maybe he was just talking about violence and gangs at schools in general.

In any case, it's intriguing that Lester is remaking his own film. But I wonder, is there anyway to really up the ante on such a vicious, over-the-top, reactionary movie in today's PC culture? Will he keep the strange Neo-Nazi subtext of the original? Will he invent an even crazier synthetic drug for the kids to sling in this post-bath salts era? I suppose we'll find out in May.

William Lustig was also on hand to introduce Maniac Cop 2, which was screening as part of the all-night program. Cheerful and friendly as ever, Lustig explained that Maniac Cop 2 was his favorite movie that he had ever made, and that he "nearly killed himself" trying to make it superior to the first film. He also added that if you haven't seen the first Maniac Cop, you won't have any trouble keeping up with the sequel... So, if you've never dived into the series, now you know where to start.