Karthi's ALEX PANDIAN Will Beat The Holy Hell Out Of You! Teaser Ahoy! 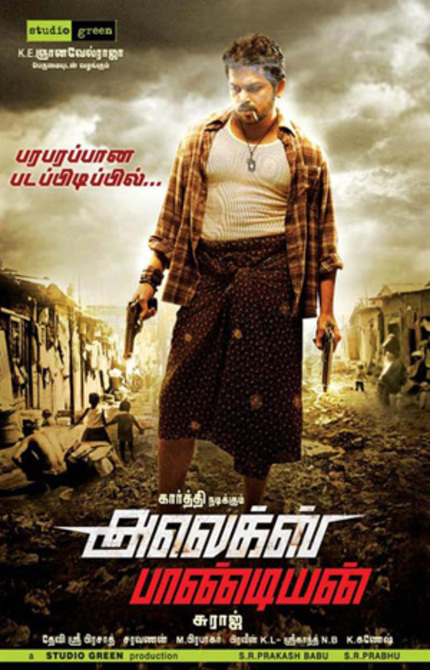 I really needed this...

As good of a year as Indian film has been having, the Tamil film industry hasn't had a whole lot of that critical success. I haven't seen all of the major blockbusters, but the ones I have seen have all been thoroughly disappointing, one glance at my review of Thaandavam from last weekend will give you an idea of how I feel about Tamil cinema this year. Thankfully, the year isn't over yet, and Alex Pandian looks like it has a pretty good chance of breaking the streak of boring action films in a big way.

Karthi leads the cast of Alex Pandian, and he looks pretty damned fierce here. ScreenAnarchy readers may remember Karthi as the man wielding the spinning saw blade of death in the trailer for Vikramarkudu remake, Siruthai, but more likely you won't have heard of him at all. Karthi's career is young, and even though he starred in Saguni a couple of months ago, it had very little critical or audience response to keep it in theaters very long.

There's really not much I can say since I can't understand any of the dialogue in Tamil trailers, but I think the action speaks for itself. I haven't been this excited over thirty seconds of footage in a long time, probably since the first trailer for Manchu Manoj's Mr. Nokia. I had to watch this teaser three times just to be sure that I was seeing what I thought I was. I literally spit soda all over my desk when the final gag rolled around. I'm going to be there, first day, first show, and you can count on that!

Give Alex Pandian thirty seconds of your life, and you'll be glad you did. If you don't, he may just beat the ever-loving shit out of you...