HIFF 2012 Review: KEY OF LIFE Is A Brilliantly Understated Gem 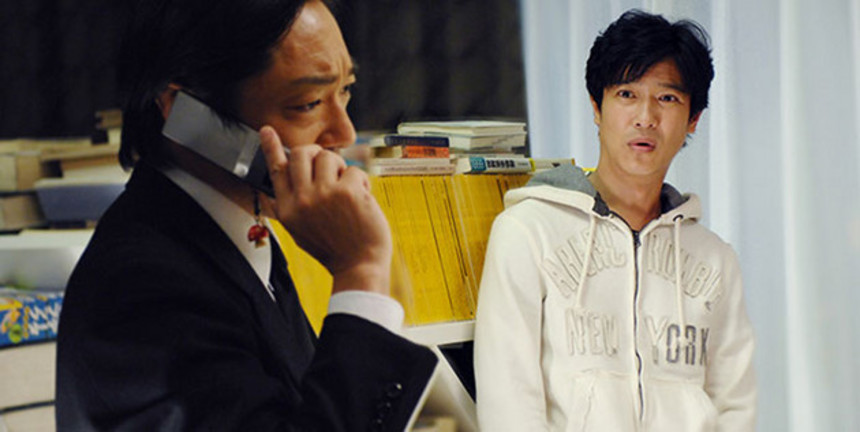 Uchida Kenji's Key Of Life is the sort of film that rarely makes its way to international audiences outside of the festival circuit and that, friends, is nothing short of a tragedy. Because as much as the typical distribution argument that films such as this - films that are too quirky for the genre crowd and too genre for the arthouse - makes a certain degree of objective sense this is simply brilliant storytelling rife with sterling performances and a completely original, completely compelling spin on both the gangster film and the romantic comedy. And, yes, you read that right.

Uchida's third feature revolves around a trinity of key characters, each of whom could easily have anchored a film all on their own but whose stories mesh into a whole even greater than the sum of its parts.

First we meet Kanae (Hirosu Ryoko), a driven and somewhat neurotic woman pushing into her mid thirties. While she's risen through the ranks of her chosen profession, Kanae's meticulous and unemotional manner have left her a single woman and she's decided it's time for that to change. She's going to get married. She doesn't know to whom yet but she's got it all scheduled out so it's time to get cracking.

And then there is Sakurai (Sakai Masato) a failed actor who also proves to be a failure as a suicide artist. Yes, one more thing for Sakurai to feel bad about not being good at. Shaken and a little sweaty from his suicide attempt Sakurai heads to the local bath house to clean up. Because, why not? It's not like he's got anything else worthwhile on the go and he's all out of rope to hang himself with.

It's at the bath house that Sakurai meets Kondo (Kurosawa Kiyoshi regular Kagawa Teruyuki), an elite hit man looking to unwind after a job. But 'meet' may be too strong a word. Because Sakurai's first encounter with Kondo begins with the assassin flying ass over teakettle after stepping on a bar of soap and crashing to the floor, knocking himself unconscious.

And here's where everything turns: Kondo's locker key falls to the floor next to Sakurai. And, hey, Sakurai's life is a big sack of shit so why not see what this guy's got going on? The keys are swapped and with them their identities for when Kondo wakes up it's with a case of total amnesia. And it's at the hospital that Kanae is drawn into this loop thanks to a chance encounter with Kondo after visiting her sick father ...

Yes, Key Of Life is an identity swap movie but don't hold that against it. Because unlike virtually every other identity swap movie ever made this is a deliciously clever bit of work featuring a trio of actors way on top of their game with the ship being steered by a director smart enough to recognize what he's got on his hands and play it all as straight as the material allows. It's a slyly absurd bit of work, consistently funny and surprising with the surprise coming not least of all from how remarkably heartfelt and insightful the film is with its characters.

At its heart Key Of Life is a movie about isolation and the desire for community, the need to be recognized and accepted, with the identity change being the mechanism that allows each of the three characters to strip away their outer facades and be at least a little bit honest about who they really are and who they want to be. Uchida is well aware of the irony of truthfulness coming out of an extended lie, the entire film delighting in finding emotional truth by subverting factual truth.

A romantic comedy of errors with a bit of a body count and a few smashed cars, Key Of Life is an absolute delight that could not possibly come more highly recommended.

Do you feel this content is inappropriate or infringes upon your rights? Click here to report it, or see our DMCA policy.
Kenji UchidaMasato SakaiTeruyuki KagawaRyôko HirosueYoshiyoshi ArakawaComedyCrimeRomance