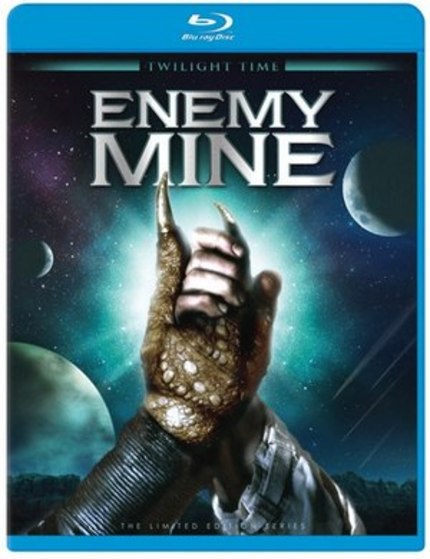 Is it weird that the director of Das Boot and Outbreak is also one of the men most responsible for shaping my love of films as a young child?

Yes, Wolfgang Petersen has made some pretty great films, but the ones that will always stay with me are a pair from 1985, The NeverEnding Story and Enemy Mine. The NeverEnding Story was one that we'd recorded on VHS off of an HBO broadcast that got watched over and over again from the time I was six years old until I moved out of my parents house. It was one of the early films that helped me to understand the power that movies have to transport you to a different time and place, not unlike its protagonist traveling from his unhappy life on Earth to the alternate realm of Fantasia, where he is a conquering hero. Enemy Mine, on the other hand, is probably my very first memory related to home video, which had a surprisingly significant impact on me.

I was about 7 years old the first time I traveled from our home in California to visit my aunt and uncle in Pennsylvania. My mother, my little sister, and I visited Mom's brother and his family every few years after that, but this trip contained a lot of firsts for my sister and I. It was the first time we'd flown in an airplane, it was the first time we ever saw snow, and it was the first time I saw a BetaMax tape. Enemy Mine was the name on the cover, and even though it looked a little scary I was so excited to see this film that I just couldn't wait. Once my uncle sat us down in front of his 20-something inch TV I was a goner, the film was amazing, and it has stayed in my memory every since, even though I've been loathe to revisit for fear of tainting that perfect memory of my very first sci-fi movie.

When Twilight Time announced that Enemy Mine was going to be part of their limited edition Blu-ray series I was simultaneously excited and a little bit scared. I didn't want my memory of this amazing film that opened my eyes to the cinema of the fantastic to end up being another experience viewed through rose colored glasses, but I decided to suck it up and take the plunge. You can imagine my relief when I plunked the film into the player and slowly realized that it is even better than I remember.

Enemy Mine is a sideways remake of John Boorman's classic Hell in the Pacific, by way of a sci-fi novella by author Barry B. Longyear. The film deals with a pair of enemy soldiers who are marooned on a foreign planet and forced to cooperate in order to survive. The human, Willis Davidge (Dennis Quaid) is determined to kill his Drac counterpart, Jeriba "Jerry" Shigan (Louis Gossett, Jr.). When it becomes clear that neither can survive on his own, they form a grudging alliance which gradually turns to friendship. About an hour in, Jeriba, the asexual alien, becomes pregnant and births a child, which takes the story in an entirely unexpected direction, most certainly for the better. Any further plot details would consist of major plot spoilers, so please trust me when I say it's a wonderful story.

It isn't just the touching emotional story that makes Enemy Mine worthwhile, the film is technically excellent, especially considering that it had been partially shot and entirely scrapped at least once. When Petersen came aboard after the original director, Richard Loncraine, left, he took the film in exactly the direction it needed to go. Having just come from an FX spectacular like The NeverEnding Story, Petersen had an unusually acute grasp of how to make effects work, and the visual effects in Enemy Mine are spectacular. In fact, this is one of those films that makes a viewer yearn for the days when people would use practical effects for things like space flight and alien worlds, it just feels so much more real and tactile than CG, but I digress.

Enemy Mine is a personal favorite for more than just the fact that it is a good film. I have positive memories attached to this film that will never go away, and are only made stronger by the fact that the film itself is so strong. If you have never seen it, there's no better way, and if you have seen it, you definitely want this disc.

I touched on it above, but the high definition transfer of this disc is outstanding. This is the rare case when HD accentuates the quality of the effects in an older film, rather than showing the seams. The perfect lighting, the amazing creature design in Jeriba, the wonderful space effects, everything looks even better in HD than I remember. Gorgeous. The Maurice Jarre synthtastic score is also amazing, and Twilight Time's isolated score track is beautiful, even if it is silent for large stretches. Technically, I found no faults with this disc, wonderful work from Fox and Twilight Time. The only extra apart from the score is the wonderful essay from Julie Kirgo, who details not only the film's thematic concerns, but also a lot of the backstage wranglings that led to Petersen taking the reins. Her writing is, as always, astute and well-researched and one of my favorite things about Twilight Time.

If you love this film like I do, you won't be disappointed with this disc. Twilight Time's limited edition of 3,000 has been on sale for a while, so if you're interested, you might want to get on it. The purchase link through Screen Archives is below!