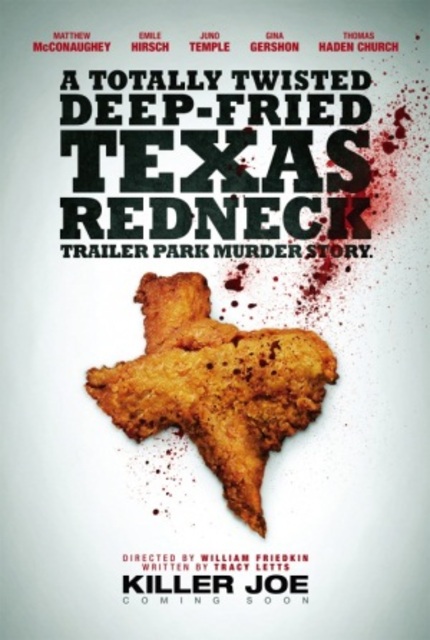 The filmography of celebrated director William Friedkin is a colorful one indeed. First-year film buffs will, of course, point to classics like The French Connection (1971) and The Exorcist (1973), while the more seasoned of the celluloid-obsessed will rattle off titles like Sorcerer (1971), Cruising (1980), To Live and Die in L.A. (1985), Blue Chips (1994), Rules of Engagement (2000), and Bug (2006) -- and the hardcore completists will also cite The Boys in the Band (1970), The Brink's Job (1978), Rampage (1987), and The Hunted (2003). Hell, I even saw the guy's 1990 arbor-related horror flick The Guardian! Like, love or hate the individual films, but there's no denying that, as a whole, they represent a rather eclectic storyteller. Most directors find a comfort zone and stay there. Guys like William Friedkin like to try different things.

All of that is a long and arid way of setting up one simple point: Mr. Friedkin's latest film, Killer Joe, is like nothing he's done before. Based on the stage play by Tracy Letts (Bug), Killer Joe hits the screen like the sweaty, bastard child of Raymond Chandler, Quentin Tarantino, and the Coen brothers. (In a way, the plot and presentation of Killer Joe feel a bit like an unholy mash-up of Raising Arizona and Fargo, and I mean that as a compliment.) A trenchant dark comedy, a convoluted crime thriller, and a twisted imorality tale all in one, Killer Joe is one of the most brazen, unpredictable, and audacious movies of the year, but those adjectives wouldn't mean all that much if the movie wasn't also darkly and consistently entertaining.

The plot is wonderfully insane: Chris (Emile Hirsch) and his dad Ansel (Thomas Haden Church) hire an assassin (Matthew McConaughey) who is also a cop to kill Chris' mom, but unfortunately Ansel's wife Sharla (Gina Gershon) and Chris' sister Dottie (Juno Temple) get wind of the sleazy scheme and cause no shortage of trouble for the devious yet clueless menfolk. Virtually every character besides "Killer Joe" (the murderer) is a walking testament to low intelligence and painfully small ambitions, but Letts and Friedkin don't paint them as simple trailer-park trash. Even within the grimy, sweaty, and unshowered world of Killer Joe, there's still a distinct code of semi-morality among its dingy denizens.

Ironically literate one moment and outrageously (almost satirically) violent in others, Killer Joe is a frequently shocking and casually cruel piece of neo-noir storytelling, and if it's the scummy characters who first draw you in, it's their strangely fascinating behavior that illustrates the cleverness of Tracy Letts' writing: basically, you don't have to like or respect a bunch of characters to relate to them. All of the aforementioned actors dive joyfully into this immoral morass of murder and its various complications, and the filmmakers (thank god) never feel the need to explain or apologize for their characters' plainly twisted code of morality. This is not a movie that mocks low-income trailer park dwellers; it simply drops a crazy crime story into a part of Texas that adds a lot of regional flavor to an already twisted little crime story.

Killer Joe also boasts a rather impressive pedigree for such a "down & dirty" indie flick. The Tyler Bates score adds a lot to a potentially dry "stage play" movie; the Caleb Deschanel cinematography keeps the film from ever "looking" ugly; and the editing by Darrin Navarro is the flick's secret weapon.

Throw in some truly excellent work from McConaughey, Temple, and Church and the result is a slightly familiar yet completely unpredictable southern-fried crime story that's, somehow, one of the most original movies of the year.

Do you feel this content is inappropriate or infringes upon your rights? Click here to report it, or see our DMCA policy.
William FriedkinTracy LettsMatthew McConaugheyEmile HirschJuno TempleThomas Haden ChurchCrimeDramaRomance