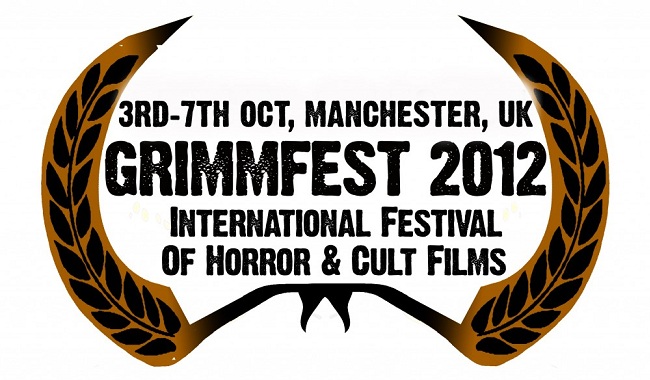 Manchester film festival Grimm Up North have announced the full lineup for their 2012 event, running from October 3rd-7th, and it looks to be up to their usual high standards. We've been following Grimmfest for the past couple of years at Twitch, and it's been great to see them going from strength to strength. This year sees them expand to two venues with special pre-festival screenings at the venerable Plaza cinema, in nearby Stockport, all part of a veritable buffet of the cream of recent horror and dark genre movies.

Some of the highlights include:

Spanish horror-comedy Attack of the Werewolves, much praised by our own Ard Vijn during its European festival run earlier this year, with an unsuccessful writer lured out to a remote rural village with the promise of an award only to find he's been roped in to free the place of an ancient curse. Director Juan Martinez Moreno will be in attendance for a Q&A.

Irish comic slasher Stitches, with a clown returning from the dead to terrorise the people who caused his accidental death. Stars Ross Noble - familiar to UK audiences from his stand-up and TV work - and Tommy Knight are scheduled to make an appearance for a Q&A.

A celebration of legendary horror author Clive Barker's 60th birthday with a screening of Nightbreed: The Cabal Cut, newly restored in its entirety (or as near as damn it) after the original film of Barker's novel was hacked down by nearly an hour. Multiple guests from the cast and crew are due to turn up for a Q&A.

Canadian thriller Below Zero, a new exploration of the dark side of the creative process with an author whose quest to overcome writer's block sees the boundaries between imagination and reality start to blur. Writer/producers Signi Olynyk and Bob Schultz are schuedled to attend the screening for a Q&A.

Pre-release screenings of the very wonderful Some Guy Who Kills People. The story of a reclusive small-town manchild struggling to rebuild his life while at the same time making sure everyone who ever wronged him meets a grisly end, I can vouch for this one personally (I had it on my top ten films of 2011). A sparkling, warm-hearted little film laced with as much genuinely affecting emotion as blackly comic violence, it should go down a treat in a festival setting.

Retro screenings of the Hammer classic The Devil Rides Out (above), adapted from Dennis Wheatley's novel, and cult 1980s video nasty Basket Case, one of the strangest pieces of body horror you will ever see - both presented in new HD remasters as well as being a rare opportunity to see these films on a cinema screen.

There's much more besides these: for full details on Grimm Up North's 2012 lineup be sure to check out their website, where you can book tickets (from full passes to individual screenings where available) and find out more about each film in the schedule. You can also find them on Facebook or on Twitter @Grimmfest. I'll be doing my best to cover as much as I can for ScreenAnarchy, but if you're anywhere near the area I urge you to check Grimmfest out post-haste. As ever, it should be a blast.
Sign-In to Vote
Tweet 0 Submit