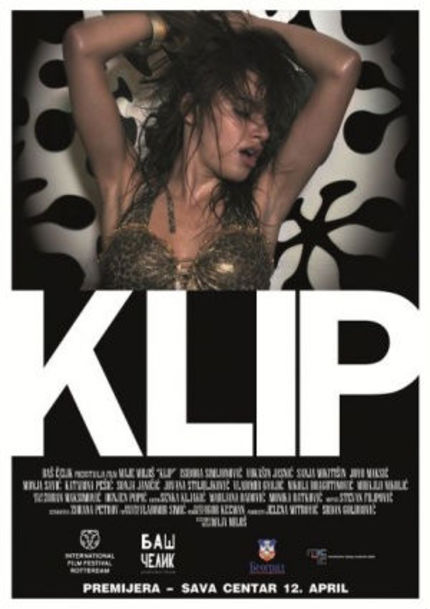 Serbia is certainly a country to keep track of, film-wise. With a rich tradition of grand, beautiful cinema, an ingrained wry sense of humor and a history that is tragic and eclectic, it should maybe not be a surprise when gems appear from this region. In recent years we have seen gorgeous fairytales, shocking explicit dramas and one time we even got a cyberpunk animation.

Screened at the International Film Festival Rotterdam as a Tiger Award nominee, Clip (original Serbian title: Klip) belongs squarely in the shocking explicit drama category. Director Maja Miloš' first narrative feature shocks, is explicit, and is definitely a drama. Nothing gorgeous here except the young teenagers spiraling towards rock-bottom on a diet of strong drugs, strong booze and ever more extreme sex. Think Larry Clark's Kids but set in a dire concrete slum in Serbia and you're not a million miles off the mark.

Jasna is a young teenager living in a hellish-looking concrete city-block. Her father has a terminal disease and needs constant care, provided by her mother and younger sister. Jasna however refuses to help, or in anyway grow towards a future of drudgery which is the only thing held in front of her. Under the guise of "studying with friends" she always escapes to a seemingly endless string of parties.

When she becomes attached to a local drug-dealing bully and "successfully" becomes his girlfriend, she starts recording all sorts of clips on her mobile phone. Meant as fun moments to share with friends, what's recorded does not paint a pretty picture at all...

By now I can read festival catalog jargon like the best of them, so when I read about a "striking and fearless performance" by the lead actress that is a guarantee she'll get undressed. But before you think this is a scandalous piece of exploitation, it very obviously is not. Maja Miloš has made every scene with skin in it as realistic and unglamorous as possible. The characters in the story may think they're acting like sex goddesses, but they come across as sordid, derailed and desperate. Yet the film also refuses to judge them, as it shows these vices are probably the only bits of fun these kids will ever have to look forward to. Their surroundings are amongst the ugliest ever put on film, and their lives a daily chore. 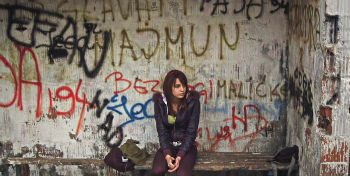 Hell, if anything or anyone is judged harshly, it's the Serbian school system, because none of the teachers ever comment on the teenagers' frequent absences, nor do they seem to mind noisy and unruly behavior when the kids DO show up in class. With parents too busy with scraping together some measly salary (or in Jasna's case, stuck in a medical situation), there is no safety net whatsoever. Any experience Jasna receives in the film comes from peer pressure, and her group has some very unsavory peers in it. But just as you think the general message is that these teens are evil you do get to see the occasional glimmer of humanity, for example when the umpteenth sex game the leads try out suddenly turns into some honest intimacy for a change.

Leading actress Isidora Simijonovic was indeed only 14 when all this was shot, meaning that any genital close-ups or real sex were done by adult stand-ins. Still, what she does do herself goes pretty damn far. Each and every scene where she shows skin was meticulously prepared by director Maja Miloš and had Isidora's parents present on the set during filming. Imagine: this must surely have made for some interesting discussions.

But by only focusing on all the sordid ugly sex (even though the film positively wallows in it), I'd be doing Isidora Simijonovic a disservice, because she is obviously a very gifted actress and she gives an excellent performance here. Most of the young actors are impressive, but Isidora really stands out, giving it her all and providing credibility to the movie all by herself.

In fact, Clip is far from being a bad film. But, unfortunately, it never gets to be a great one, either. There is just nothing here that I haven't seen before, only the mix is different and it is a lot more sexually explicit. I probably had a group of teenagers like this in my school when I was that age. They were acting like assholes then (even without smartphones), and the only thing that Clip tells me is that given the right set of circumstances, similar teens still act like assholes now.

What to make of this ... Clip is certainly competently made and bravely acted by its young cast. But I never felt like I took anything with me after I finished watching the screening. I basically saw that teenagers who gravitate to bullies are the same everywhere in the world apparently, and that's it.

Audiences at the International Film Festival Rotterdam awarded Clip a 3.4 out of 5, just so you know people here are a bit more generous towards this one than I am..

(Review originally published in connection with the film's January 2012 screening at the International Film Festival Rotterdam.)