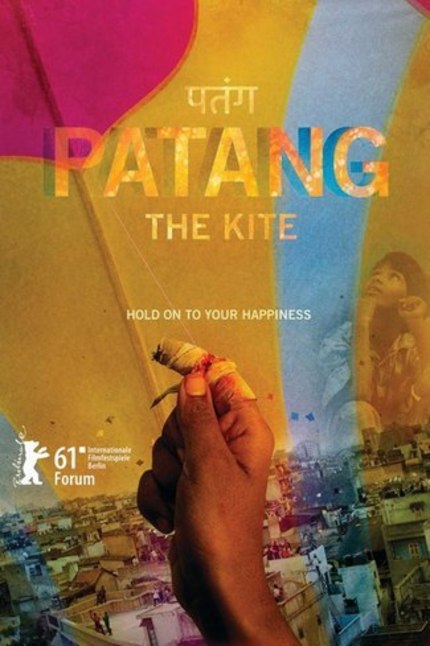 The rhythms of Prashant Bhargava's Patang (The Kite) mirror the simple pleasures of kite flying in many ways. The story flows here and there as it pleases, following its own whims, bound only by the tether of reality that keeps the it from crashing to the ground in an angry heap. Like life itself, this Patang is not bound to follow strict laws of structure, rather it darts to and fro as the characters continually make the decisions that affect their own lives and experiences. The danger of collapse is always there, but Bhargava keeps a firm grip on the basics, while still allowing the film to catch its own breeze as necessary.

Mukkund Shukla is Jayesh, a Delhi-based businessman heading back to his Ahmedabad roots with his young adult daughter in tow for the annual Uttarayan Kite Festival. A three day event in which the skies above the city fill with colorful kites from dawn till dusk, and the nights are filled with fireworks and music. Still holding down the fort in Ahmedabad are Jayesh's sister-in-law, the widow of his brother, and his nephew Chakku played by the Indian actor of the moment, Nawazuddin Siddiqui, in what was his first leading role at the time of shooting in 2007.

Not all was well between Uncle and nephew, as Chakku openly blames Jayesh for his father's death from drinking, and Jayesh attempts to drag the old guard back to Delhi with him. This conflict does form the base of the tension on which the film balances, however, there is so much more going on, and nuanced relationships begin to reveal themselves. It is the lack of contrivance that turns Patang into a work worthy of admiration. Whereas many Hindies (Hindi independent films) work extremely hard at creating conflict, Patang simply is; it observes, it stands back from the fray and watches the world turn in a way that is pleasing, and yet still manages to convey that tension that exists in family relationships all over the world.

This is a film about accepting the simple pleasures in life and being accepting of change while freeing oneself to take solace in the simplicity of home. While Jayesh revels in the simple joys of his simple origins, regressing to a simpler time in his own life, his daughter Priya (Sugandha Garg) surges forward, as any young adult would. However, Jayesh's revelation that he wants to move the family to Delhi is met with strong opposition by Chakku, who has a chip on his shoulder the size of the Taj Mahal. Neither one is able to live in the moment, and because of that Chakku's present is filled with rage and Jayesh's nostalgia is tainted. Only Priya is able to be free, without the stain of tragedy, and she blooms on this trip, falling in love in a way that only the young really can. It is a beautiful exploration of the dangers of living in the past, even though it may seem like the most beautiful place to be.

As I mentioned above, the beauty in Patang is in its simplicity. No crazy chase scenes, to big action, no fancy whiz-bang editing or CG, just a story well told. No one is going to mistake this for a documentary, the film is far too graceful to be accidental, however, the film holds sway over the audience by allowing them to feel privy to someone else's traumas that feel eerily familiar. These are the trials and tribulations of families everywhere, and just like in the film, for every long held grudge, there is beauty to be found if one can simply lift one's head above the mire. Or in this case, allow your spirit to fly with the kites and feel the freedom that the present brings.
Tweet Post Submit

Patang is being released theatrically in limited markets by the IAAC, click here for listings