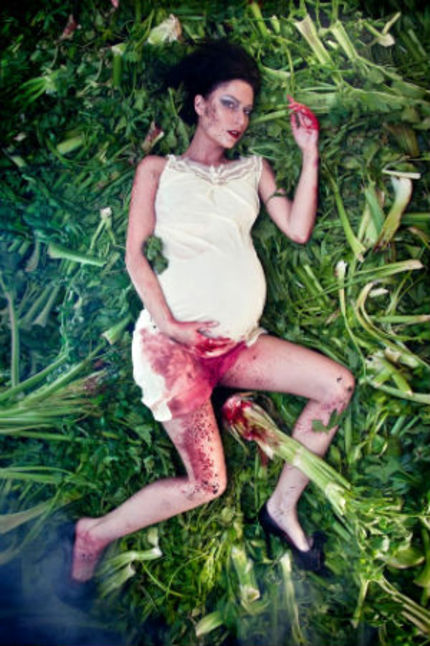 We first heard about Apio Verde last December, when the startling first image, featuring a bloody pregnant woman, was released. Now we're pleased to premiere the first teaser for the film, directed by Francesc Morales, as well as a brief interview with the director.

Morales summarizes the premise of the film: "Apio Verde is a psychological thriller focused on Adriana (Catherine Mazoyer), a woman who is told her child has anencephaly, a brain malformation that won't allow her child to live once he's outside the womb. As therapeutical abortion is illegal in Chile, she must wait five months until giving natural birth. She's in a situation where she can't stand her own body, as she feels she's carrying a monster."

In the interview, conducted by email, Morales explains his inspiration for the film and gives his views on therapeutic abortion -- cases where the mother's life is in danger, or the fetus is unviable, or the pregnancy resulted from rape.

ScreenAnarchy: From news reports, it appears that the first image you released caused a stir in Chile; can you talk a bit more about the reaction to the film?

Morales: I started making the project with the leading actress, Catherine Mazoyer, attached from day one; we had a strong conviction that a film about therapeutic abortion needed to be made. At the begining many people in the film industry told us we live in a very conservative country and there would be no way a fim like this could be made. We presented the project to many companies, but no one wanted to get involved on a film like this. I even went to the local version of Who Wants to be a Millionaire? to look for finance for the film. As time passed by we were able to recruit many well-known actors and the film got bigger and bigger.

Newspapers started publishing articles on the film and a huge buzz was made when we first released our film poster. It quickly became for us a message that needed to be sent, a story that has to be told. It seemed everyone was excited about the film. Nevertheless, we were robbed twice during the shooting and never found the persons who did it. The leading actress' car window was broken and her purse stolen, and the other time my whole car just disappeared. We weren't sure if it was a coincidence or not, as both roberries occurred when we shot on some locations that we announced online.

Here we have a film festival called Fem Fest which is dedicated to women; they invited us to show a preview of the film to a selected audience. I surprised everyone by showing a rough cut of the whole film. They were many people involved on therapeutical abortion in the audience and we received very positive reviews, we even had people in the audience crying.

How widespread are the problems created by the ban of therapeutic abortion in Chile?

Therapeutical abortion here is illegal under any circumstances. This affects directly women who have been raped, children that have a terminal disease or that put in danger the mother's health. Around 972 Chilean women each year have an inviable pregnancy and they suffer something as unnatural as carrying a child that they don't want for nine months. Women's human rights are not being respected in our country and we feel there is a need to generate awareness. Around 150,000 abortions are being done in Chile illegaly.

Three proposed laws were rejected in April of this year. Now one year has to pass before they can be voted on again -- which is the date [April 2013] when we're premiering the film and hopefully we can help the cause. 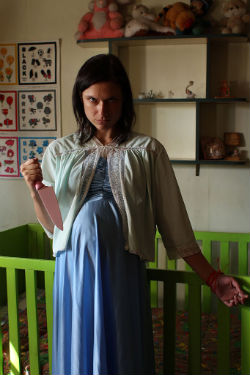 How do you balance personal and social concerns with the genre expectations of a horror movie?

My first feature film Humanimal was very surrealist and ultimately a great experiment for me to begin as a filmmaker. Its leading actor Ramón Llao ended up being nominated for an Altazor, the most important acting award here in Chile, but as the film was very experimental I felt I needed to make something that would have a bigger social relevance.

I first found out about the problem of therapeutic abortion just a few weeks before I started writing the project. I was waiting for a friend at his apartment's lobby and started reading an interview with a famous actress where she talked about the issue. I realized this was a huge problem and I had absolutely no idea it existed. If this movie can open the eyes of people like that interview, then the purpose of the film would be fulfilled.

Yet social films are usually too lame for common people to be interested in them. That's why I decided to make a mixture of social and a horror film. I've always loved horror film, but always criticize that they are extremely shallow. Apio Verde is basically a psychological thriller with elements of horror where the main conflict is a social topic, so people can know the issue exists and hopefully after seeing the film they will go home and investigate more about therapeutic abortion.

Nowadays I'm working on two different feature films that also mix social issues with horror: a slasher and a torture film. Hopefully we'll shoot at least one of them this year.

Check out the teaser below, which does exactly what a teaser should do, without revealing too much about the plot.

Do you feel this content is inappropriate or infringes upon your rights? Click here to report it, or see our DMCA policy.
Francesc MoralesCatherine MazoyerCatalina AguayoJenny CavalloGregory CohenDramaHorrorThriller