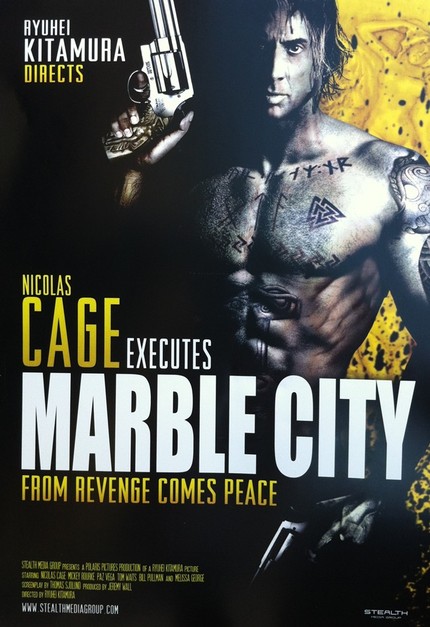 Ladies and gentlemen, I present to you what may be the greatest, most ridiculous poster ever made for a movie which does not yet exist. Freshly arrived in Cannes I made my first foray into the Marche du Film - the market area separate from the main festival where films are bought and sold for international distribution - and the first thing I discovered was this: The sales art for a proposed new film by Versus and Midnight Meat Train director Ryuhei Kitamura titled Marble City, featuring a wildly photoshopped Nicolas Cage in the lead.

Even though on parole, Rune immediately steals a car, picks up two nickel-plated .45's and goes on a violent search for the man that wronged him. His investigation brings him into encounters with strippers, mob enforcers and the very worst that the underworld has to offer.

But Rune is also seeking personal redemption, praying for forgiveness from his sinful ways. His journey into darkness culminates in an epic gun battle with those who wronged him.

Also listed in the cast - and remember that these things can and frequently do change at this stage - are Mickey Rourke, Melissa George, Tom Waits and Bill Pullman.